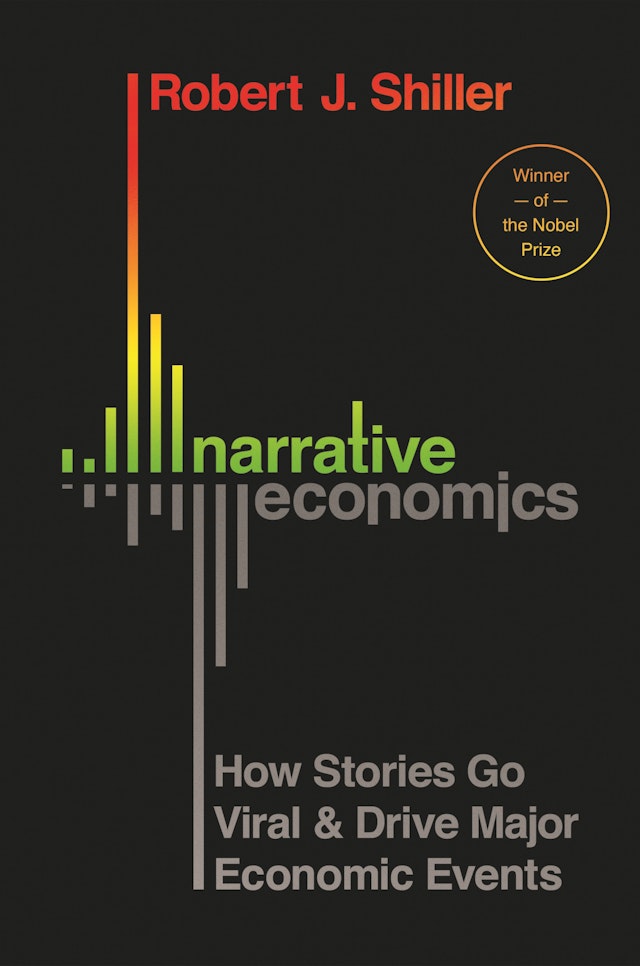 "Shiller is one of the world’s most original economists. . . . Stories allow human beings to make sense of an uncertain world. But they also drive economies into booms and busts. Armed with this understanding, we gain a far richer understanding of how economies behave."—Martin Wolf, Financial Times

"[Shiller] explores how the public’s subjective perceptions can shape economic trends. A sensible and welcome escape from the dead hand of mathematical models of economics."—The Economist

"A magisterial account . . . . In some ways . . . a bigger challenge to the foundations of economics than behavioral economics."—Steve Denning, Forbes

"The idea that human behaviour can exert its own influence in the market is something that most traders would buy into. . . . But in Narrative Economics, Shiller goes much broader and deeper, looking at how the stories we tell ourselves about the world drive our behaviour. . . . Economists, he argues, need to study this if they are to have any hope of doing a better job than they have in the past of predicting major events . . . and how people react to them."—Rana Foroohar, Financial Times

"Many economists argue that the US housing market and economy are still on solid foundations, but ignore Shiller’s warnings at your peril. He rarely gets it wrong."—Tom Rees, The Telegraph

"[Shiller aims] to identify the enduring narratives that influence the way we think about the economy, and may influence our patterns of spending and saving, and therefore become self-fulfilling prophecies . . . the results are fascinating, and sometimes startling."—Howard Davies, Prospect

"Shiller’s thorough discussion and many examples are certainly convincing as to the importance of narratives in individual economic decision-making and aggregate economic phenomena."—Sonia Jaffe, Science

"Any given scenario can allow for multiple narratives, both actual and potential. The question is why some prove more compelling than others. Shiller offers a range of answers, starting with the most obvious: a narrative is compelling when it is engaging and well expressed. Because his book is very well written, Shiller himself has satisfied this criterion."—Barry Eichengreen, Project Syndicate

"Shiller has none of the salesman-like bluster of the stock pickers clamouring for attention on business TV news . . . . As it is, he has only 40-odd years of being freakishly right about things. It will have to do."—David Morris, Financial News

"The book is . . . good fun to read. It is full of amusing and apposite quotations, and interesting detail."—Charles Goodhart, Central Banking Journal

"Shiller’s book is a spectacular effort at unifying distinct fields and encouraging the profession to be ever more capacious in its approach to phenomena and methodology."—Mihir Desai, Times Higher Education

"What’s surprising, perhaps, is that the gearheads in academic economics departments may finally be getting wind of all this. If they are, much of the credit must go to Robert J. Shiller, the Yale economist who won the Nobel Prize in his field in 2013. Shiller’s iconoclastic new book, Narrative Economics, ranges across disciplines to explore the role of narratives in explaining (as the subtitle has it) 'how stories go viral and drive major economic events'."—Daniel Akst, Strategy+Business

"This book about the economic significance of viral stories has a great potential to become a viral story itself."—Gábor István Bíró, Metascience

"If we are going to win the war for reason and evidence, if we are going to stop humans from wiping out entire species and cities, economists and humanists are going to need to create more bridges across the disciplinary chasms. The proposal to focus on narratives and their powers is spot on. Robert Shiller gets us going."—Jeremy Adelman, Public Books

"This is a must read."—Vivek Kaul, Mint

"The Nobel Prize-winning economist Robert Shiller defends the skills learned by English majors and other liberal arts graduates in his new book, Narrative Economics. Such graduates have highly developed critical-thinking and analysis skills in the narrative storylines that help people guide their way through complex personal and organizational relationships."—C. Ronald Kimberling, The Hill

"Much of the book . . . . is an enjoyable and well-informed description of such narratives. I especially liked his discussion of bimetallism, wherein he shows that Brexit is not the first debate about an abstruse issue which triggered a culture war."—Chris Dillow, Stumbling & Mumbling

"[A] highly readable introduction to narrative economics . . . . Readers can readily identify with the examples given in this book and will gain a much better understanding of the role of stories, especially in view of the speed of modern contagions."—David Lorimer, Paradigm Explorer

"Narrative Economics is an eloquent and accessible exposition of a seductive idea. It’s a particularly compelling hypothesis."—Tim Jackson, Nature

"This book alone should be enough to convince readers that assumptions about “given” preferences and “rational” utility-maximizing actors are totally inadequate for predicting economic and social events."—Kemal Derviş, Project Syndicate

"This is a fascinating and important book, written in an engaging style and packed with intriguing examples."—Diane Coyle, University of Cambridge

"In this highly readable and entertaining book, Robert Shiller, extending the idea of contagious narratives with profound economic effects beyond stock-market and housing bubbles, ranges widely from old debates about the gold standard to the latest impacts of artificial intelligence. Narrative Economics contains a treasure of priceless quotations and examples and breaks new ground by tracing key words and phrases as they go viral and eventually fade away."—Robert J. Gordon, New York Times bestselling author of The Rise and Fall of American Growth

"What causes the recurrent bubbles and busts in financial markets that create so much disruption in our lives? Economists have explored all sorts of possible causes, from subtle changes in monetary policy to the solar sunspot cycle. In this fascinating book, Robert Shiller argues that what really matters is a good story. Narrative economics, he argues, can explain what statistics miss, and shows how viral shifts in economic thinking resemble real epidemics."—John Quiggin, author of Economics in Two Lessons

"Ambitious and absorbing, Narrative Economics takes seriously the possibility that stories may have an economic life of their own, spreading through communities like epidemics, and it makes an extremely compelling case that studying such stories is important. The book is also a joy to read—lively, engaging, and accessible."—Rajiv Sethi, Barnard College, Columbia University