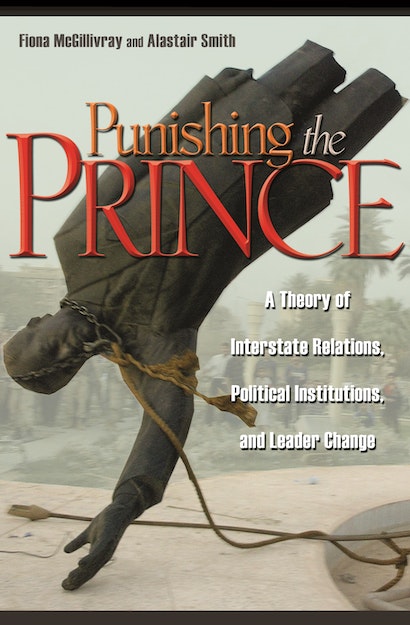 When the United States invaded Iraq, President Bush made it clear: the U.S. was not fighting the Iraqi people. Rather, all quarrels were solely with Iraq’s leadership. This kind of assertion remains frequent in foreign affairs — sanctions or military actions are imposed on a nation not because of its people, but because of its misguided leaders. Although the distinction might seem pedantic since the people suffer regardless, Punishing the Prince reveals how targeting individual leaders for punishment rather than the nations they represent creates incentives for cooperation between nations and leaves room for future relations with pariah states.

Punishing the Prince demonstrates that theories of leader punishment explain a great deal about international behavior and interstate relations. The book examines the impact that domestic political institutions have on whether citizens hold their leaders accountable for international commitments and shows that the degrees to which citizens are able to remove leaders shape the dynamics of interstate relations and leader turnover. Through analyses of sovereign debt, international trade, sanctions, and crisis bargaining, Fiona McGillivray and Alastair Smith also uncover striking differences in patterns of relations between democratic and autocratic states. Bringing together a vast body of information, Punishing the Prince offers new ways of thinking about international relations.

"Punishing the Prince provides both a compelling explanation for observed patterns of democratic cooperation and additional empirical content beyond previous explanations of the same phenomenon, including the effects of leadership change itself on patterns of cooperation. In other words, it provides valuable, and all too rare, predictions that can discriminate among competing explanations."—Scott Wolford, Perspectives on Politics

"This is an important and impressive book, supporting and extending a theoretical view of politics that integrates the analysis of domestic and international processes in a manner that is necessary to the understanding of both."—James Lee Ray, International History Review

"Punishing the Prince is an important study that will be influential in a number of key scholarly debates. The theory developed in this book offers a compelling perspective on the causes of change in interstate relations, the success of international cooperation, the causal mechanisms behind 'audience costs,' and the broad influence of domestic political institutions on international relations. I fully expect this book to become assigned reading in many core seminars on international relations and for the arguments developed herein to spawn significant further research."—Brett Ashley Leeds, Cambridge Journals