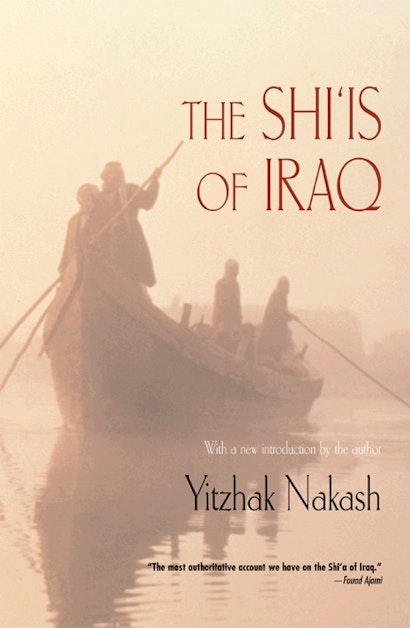 The Shi’is of Iraq provides a comprehensive history of Iraq’s majority group and its turbulent relations with the ruling Sunni minority. Yitzhak Nakash challenges the widely held belief that Shi’i society and politics in Iraq are a reflection of Iranian Shi’ism, pointing to the strong Arab attributes of Iraqi Shi’ism. He contends that behind the power struggle in Iraq between Arab Sunnis and Shi’is there exist two sectarian groups that are quite similar. The tension fueling the sectarian problem between Sunnis and Shi’is is political rather than ethnic or cultural, and it reflects the competition of the two groups over the right to rule and to define the meaning of nationalism in Iraq. A new introduction brings this book into the new century and illuminates the role that Shi`is could play in postwar Iraq.

Yitzhak Nakash teaches Middle Eastern history at Brandeis University. His publications on Iraq and Shi‘i Islam have gained recognition in the United States and Europe as well as in the Arab world and in Iran. He is currently completing a new book focusing on Shi‘ism and nationalism in the Arab world.

"This is a superb study of Iraq's Shia majority. Based on remarkable scholarship, the book brings to life a whole political community that has often been seen as a mere appendage of the larger Shia population in Iran. . . . This study is a potent reminder of the power of the modern state to shape and control even such basic social phenomena as religious identity and its expression."—William B. Quandt, Foreign Affairs

"Nakash's account of the process of community formation in Iraq has fascinating implications for modern Middle Eastern history. In that broad historical revolution which is the settlement of the Middle Eastern tribes, we can see that the agents were: Sufism in most of the Sunni countries; fundamentalist Islam in Arabia; and Shi'ism in Iraq and Iran. In each case, the primitive Islam of the tribes takes on a new form as an accompaniment to a fundamental change in economic and social life."—M. E. Yapp, The Times Literary Supplement