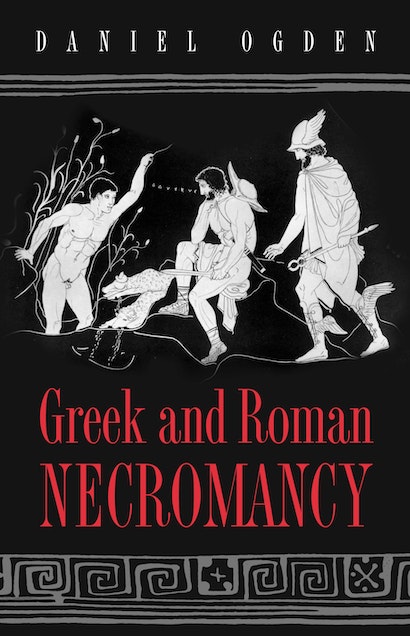 In classical antiquity, there was much interest in necromancy — the consultation of the dead for divination. People could seek knowledge from the dead by sleeping on tombs, visiting oracles, and attempting to reanimate corpses and skulls. Ranging over many of the lands in which Greek and Roman civilizations flourished, including Egypt, from the Greek archaic period through the late Roman empire, this book is the first comprehensive survey of the subject ever published in any language.


Daniel Ogden surveys the places, performers, and techniques of necromancy as well as the reasons for turning to it. He investigates the cave-based sites of oracles of the dead at Heracleia Pontica and Tainaron, as well as the oracles at the Acheron and Avernus, which probably consisted of lakeside precincts. He argues that the Acheron oracle has been long misidentified, and considers in detail the traditions attached to each site. Readers meet the personnel — real or imagined — of ancient necromancy: ghosts, zombies, the earliest vampires, evocators, sorcerers, shamans, Persian magi, Chaldaeans, Egyptians, Roman emperors, and witches from Circe to Medea. Ogden explains the technologies used to evocate or reanimate the dead and to compel them to disgorge their secrets. He concludes by examining ancient beliefs about ghosts and their wisdom — beliefs that underpinned and justified the practice of necromancy.


The first of its kind and filled with information, this volume will be of central importance to those interested in the rapidly expanding, inherently fascinating, and intellectually exciting subjects of ghosts and magic in antiquity.

Daniel Ogden is Reader in Ancient History at the University of Exeter. He is the author of Magic, Witchcraft, and Ghosts in the Greek and Roman Worlds; Greek Bastardy in the Classical and Hellenistic Periods; The Crooked Kings of Ancient Greece; Aristomenes of Messene; and Polygamy, Prostitutes and Death. He is editor of The Hellenistic World New Perspectives.

"[A] substantial contribution. . . . Ogden takes on . . . Necromancy . . . with a huge diachronic sweep and exhaustive trawling of evidence. . . . [This] book will be indispensable to future scholars."—Peter Green, Times Literary Supplement

"The thought of raising and consulting the dead runs throughout the history of antiquity. . . . The dead who did come back were often in an angry and violent mood; a hero might be needed to vanquish them, or a potent magic to induce them to be gone. . . . Ogden's [is an] admirably cool and scholarly discussion of necromancy."—Jasper Griffin, New York Review of Books

"Ogden's book . . . makes it easy for the reader to follow and enjoy the beauty (and sometimes strangeness) of the sources and the accounts of necromancy they provide."—Julia Kindt, International History Review

"It is rare and refreshing to read a book of the high caliber of the one under review. The scope is breathtaking, the sources cited are thorough and wide-ranging, and the author's own biases are either nonexistent or kept completely under control. Furthermore, the subject matter is so provocative and the writer's style is so direct and fast paced that it is difficult to put the book down once begun. . . . Whether one sits down to read the book cover to cover or comes to it as a resource tool, there will be no disappointment."—Elise P. Garrison, Religious Studies Review

"For specialists, this is a treasure trove of the ancient evidence on necromancy and its related modern scholarship."—Choice

"This study fills a gaping hole in the scholarship, and it is sorely needed. The fascinating material it covers has never been collected and discussed in one volume, in spite of the current surge of interest in ancient magic and its intersection with religion. The author's command of the sources is excellent. He has made an exhaustive survey of all the relevant evidence, so that the coverage of the subject is satisfyingly complete."—Jennifer Larson, Kent State University