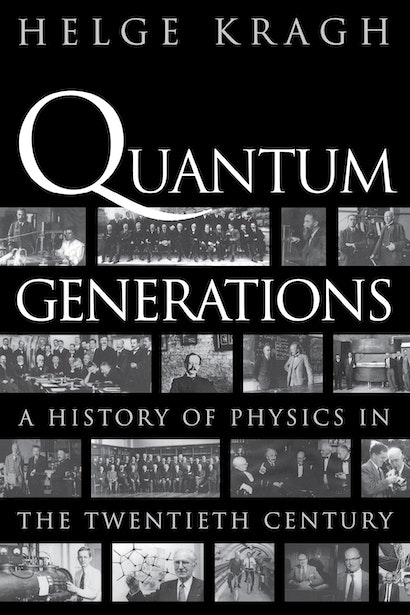 At the end of the nineteenth century, some physicists believed that the basic principles underlying their subject were already known, and that physics in the future would only consist of filling in the details. They could hardly have been more wrong. The past century has seen the rise of quantum mechanics, relativity, cosmology, particle physics, and solid-state physics, among other fields. These subjects have fundamentally changed our understanding of space, time, and matter. They have also transformed daily life, inspiring a technological revolution that has included the development of radio, television, lasers, nuclear power, and computers. In Quantum Generations, Helge Kragh, one of the world’s leading historians of physics, presents a sweeping account of these extraordinary achievements of the past one hundred years.


The first comprehensive one-volume history of twentieth-century physics, the book takes us from the discovery of X rays in the mid-1890s to superstring theory in the 1990s. Unlike most previous histories of physics, written either from a scientific perspective or from a social and institutional perspective, Quantum Generations combines both approaches. Kragh writes about pure science with the expertise of a trained physicist, while keeping the content accessible to nonspecialists and paying careful attention to practical uses of science, ranging from compact disks to bombs. As a historian, Kragh skillfully outlines the social and economic contexts that have shaped the field in the twentieth century. He writes, for example, about the impact of the two world wars, the fate of physics under Hitler, Mussolini, and Stalin, the role of military research, the emerging leadership of the United States, and the backlash against science that began in the 1960s. He also shows how the revolutionary discoveries of scientists ranging from Einstein, Planck, and Bohr to Stephen Hawking have been built on the great traditions of earlier centuries.


Combining a mastery of detail with a sure sense of the broad contours of historical change, Kragh has written a fitting tribute to the scientists who have played such a decisive role in the making of the modern world.

Helge Kragh is Professor of History of Science at Aarhus University, Denmark. His previous books include An Introduction to the Historiography of Science, Dirac: A Scientific Biography, and Cosmology and Controversy: The Historical Development of Two Theories of the Universe (Princeton).

"An ambitious one-volume history: the first comprehensive textbook to address most of the significant aspects in the intellectual history of 20th-century physics. Kragh's achievement . . . is quite remarkable. . . . For physicists who want to 'humanize' their courses, or brush up on their professional past, for those who teach the history of modern science, and for anyone fascinated with physics, I can recommend this book as an indispensable resource."—Diana Barkan, Physics World

"Neither a specialized academic work nor a mere popularization, Kragh's tome [is a] synthetic, deeply detailed and carefully explained survey. . . An impressive reference work, and a serious award-winning read."—Publisher's Weekly

"A sweeping survey of the development of modern physics . . . wide-ranging, studiously researched, and comprehensive."—The Economist

"Within a century we've seen the rise of new physics, which has, however haltingly, at last begun to answer the big questions. . . . Taken together, they're an embarrassment of riches, and Kragh has had to pare the story down severely. But he's equal to the task, and manages to cover the pantheon of 20th-century physics."—New Scientist

"It is a thrilling story, full of excitement, danger, surprise and beauty, and it is told with lucidity and scholarship by Helge Kragh. What he gives us in this absorbing account is the story of what could be mankind's greatest intellectual adventure to date."—Financial Times

"Kragh does an exceptional job of trying to cover in a single volume one of the most prolific sciences of this century."—Library Journal

"Compared with the popular interest books on physics . . . Kragh presents appreciably more technical detail, and his estimable overview will appeal better to the active physics student."—Booklist

"A fine new study. . . . Mr. Kragh manages to cover this vast canvas in less than 500 pages, leaving very little of importance out. It is amazing how concise one can be if once knows what one is talking about."—Jeremy Bernstein, Washington Times

"An excellent guide to the historical literature on almost any subject in the history of twentieth-century physics."—Laurie M. Brown, Physics Today

"Missing until now has been a relatively short, readable book that synthesizes the extensive research by historians of modern physics, to give an accurate guide to the new physics and the complex plaths by which it was developed. Quantum Generations does all this, and more . . . It is hard to think of anyone better qualified to write this book."—Stephen G. Brush, American Journal of Physics

"A superb account of the last hundred years of physics. . . . I very much doubt we will see a comparable history of twentieth century physics for years to come. This is a magnificent work of synthesis that cannot be too highly commended for its balance, coverage, and clarity."—Xavier Roque, Centaurus

"This is very good scientific history and in some measure philosophy written by someone who has an understanding of the process of scientific work. The writing is clear and largely non-technical. Although the focus is cosmology, the book will appeal to anyone with an interest in how science actually works, whether it is through the history of the philosophy."—D.R. Matravers, Contemporary Physics

"This book is a very ambitious and largely successful attempt to provide a one-volume history of twentieth-century physics. It is a Herculean task, and Helge Kragh is well aware of the problems and pitfalls. . . . Incredibly enough, Kragh . . . [gives] both a fair assessment of most of the major themes in this most busy and creative of centuries, and yet at the same time giving summaries of the major research developments within each of the major fields. This is no mean feat, and in fact it is a rather amazing one, so that we have here, in one volume, a wide-ranging view of many of the outstanding accomplishments of this century in physics."—Daniel M. Greenberger, ISIS

"Helge Kragh's book is a magnificent achievement. It is a rich, erudite history of physics from the end of the nineteenth century to the end of the twentieth that is also informative and insightful about social, cultural, political, and institutional contexts. Kragh has included developments at the physics-applied physics-technology interface and has thus given an unusually comprehensive and balanced account of twentieth-century physics. What is equally impressive is that the book is readily accessible to the general reader and will also be valued by scientists and historians."—S.S. Schweber, author of QED and the Men Who Made It: Dyson, Feynman, Schwinger, and Tomonaga

"This book will come to be seen as an indispensable reference for those who seek a full understanding of its topic—which, of course, is one of the most important topics in modern history."—Spencer R. Weart, American Institute of Physics

"Kragh has succeeded in presenting an engaging and comprehensive history of the development of physics in this century, one that will be accessible to a wide audience. This book will surely become a standard reference for students of twentieth-century science."—Ronald Anderson, Boston College