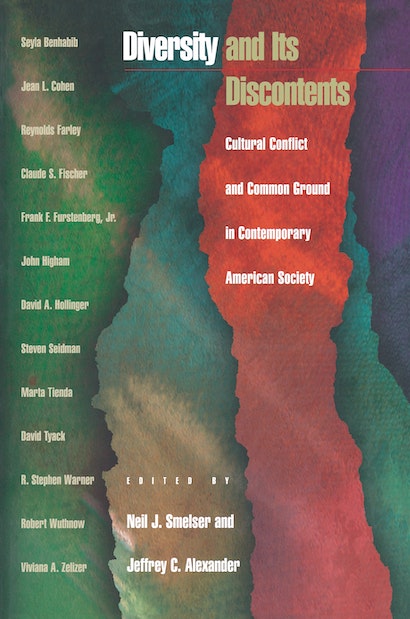 Never before has the legitimacy of a dominant American culture been so hotly contested as over the past two decades. Familiar terms such as culture wars, multiculturalism, moral majority, and family values all suggest a society fragmented by the issue of cultural diversity. So does any social solidarity exist among Americans? In Diversity and Its Discontents, a group of leading sociologists, political theorists, and social historians seek to answer this question empirically by exploring ideological differences, theoretical disputes, social processes, and institutional change. Together they present a broad yet penetrating look at American life in which cultural conflict has always played a part. Many of the findings reveal that this conflict is no more or less rampant now than in the past, and that the terms of social solidarity in the United States have changed as the society itself has changed.


The volume begins with reflections on the sources of the current “culture wars” and goes on to show a number of parallel situations throughout American history — some more profound than today’s conflicts. The contributors identify political vicissitudes and social changes in the late twentieth century that have formed the backdrop to the “wars,” including changes in immigration, marriage, family structure, urban and residential life, and expression of sexuality. Points of agreement are revealed between the left and the right in their diagnoses of American culture and society, but the essays also show how the claims of both sides have been overdrawn and polarized. The volume concludes that above all, the antagonists of the culture wars have failed to appreciate the powerful cohesive forces in Americans’ outlooks and institutions, forces that have, in fact, institutionalized many of the “radical” changes proposed in the 1960s. Diversity and Its Discontents brings sound empirical evidence, theoretical sophistication, and tempered judgment to a cultural episode in American history that has for too long been clouded by ideological rhetoric.

Neil J. Smelser is the Director of the Center for Advanced Study in the Behavioral Sciences at Stanford. His books include The Handbook of Economic Sociology (Princeton), coedited with Richard Swedberg. Jeffrey C. Alexander is a Professor in the Department of Sociology at the University of California, Los Angeles. His most recent book is Real Civil Societies: Dilemmas of Institutionalization.

"Neil Smelser and Jeffrey Alexander have put together an important and most unusually coherent volume dealing with many key topics of current American academic and intellectual discourse: social diversity, cultural conflict, and social solidarity. Without being pollyannish, documenting troubles where they exist, this volume uses theoretical analysis and extensive empirical data to criticize what has become our 'culture of discontent.'"—Bernard Barber, Columbia University