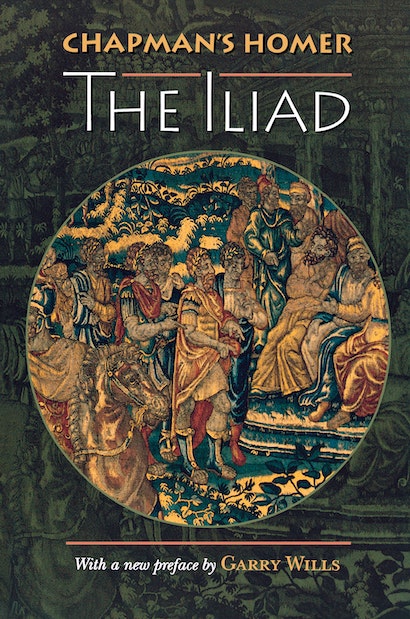 George Chapman’s translations of Homer are the most famous in the English language. Keats immortalized the work of the Renaissance dramatist and poet in the sonnet “On First Looking into Chapman’s Homer.” Swinburne praised the translations for their “romantic and sometimes barbaric grandeur,” their “freshness, strength, and inextinguishable fire.” The great critic George Saintsbury (1845-1933) wrote: “For more than two centuries they were the resort of all who, unable to read Greek, wished to know what Greek was. Chapman is far nearer Homer than any modern translator in any modern language.”


This volume presents the original (1611) text of Chapman’s translation of the Iliad, making only a small number of modifications to punctuation and wording where they might confuse the modern reader. The editor, Allardyce Nicoll, provides an introduction and a glossary. Garry Wills contributes a preface, in which he explains how Chapman tapped into the poetic consonance between the semi-divine heroism of the Iliad’s warriors and the cosmological symbols of Renaissance humanism.

"Nicoll's gently modernised edition of Chapman's Homer [is] a work to be admired, bought, even read right through. . . . This cheap reprint of a scarce and very good edition of a great work is a thing to be welcomed."—Colin Burrow, London Review of Books

"Oft of one wide expanse had I been toldThat deep-browed Homer ruled as his demesne;Yet did I never breathe its pure sereneTill I heard Chapman speak out loud and bold."—John Keats