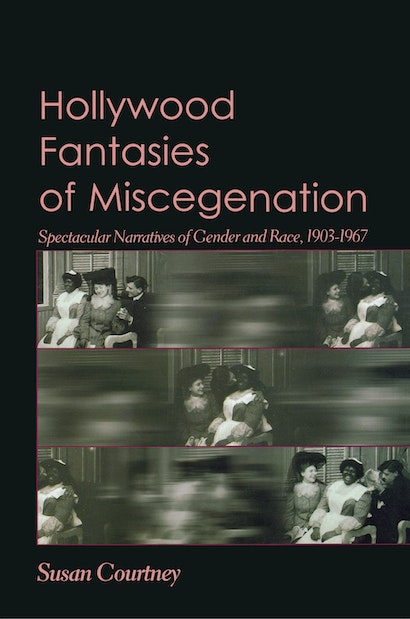 Hollywood Fantasies of Miscegenation analyzes white fantasies of interracial desire in the history of popular American film. From the first interracial screen kiss of 1903, through the Production Code’s nearly thirty-year ban on depictions of “miscegenation,” to the contemplation of mixed marriage in Guess Who’s Coming to Dinner (1967), this book demonstrates a long, popular, yet underexamined record of cultural fantasy at the movies.


With ambitious new readings of well-known films like D.W. Griffith’s 1915 epic The Birth of a Nation and of key forgotten films and censorship documents, Susan Courtney argues that dominant fantasies of miscegenation have had a profound impact on the form and content of American cinema.


What does it mean, Courtney asks, that the image of the black rapist became a virtual cliché, while the sexual exploitation of black women by white men under slavery was perpetually repressed? What has this popular film legacy invited spectators to remember and forget? How has it shaped our conceptions of, and relationships to, race and gender?


Richly illustrated with more than 140 images, Hollywood Fantasies of Miscegenation carefully attends to cinematic detail, revising theories of identity and spectatorship as it expands critical histories of race, sex, and film. Courtney’s new research on the Production Code’s miscegenation clause also makes an important contribution, inviting us to consider how that clause was routinely interpreted and applied, and with what effects.

Susan Courtney is Associate Professor of English and Film Studies at the University of South Carolina, Columbia

"With Hollywood Fantasies of Miscegenation: Spectacular Narratives of Gender and Race, 1903-1967, Susan Courtney offers an important work that should serve as the starting point for any analysis of the depiction of race and gender in film. . . . Simply put, Hollywood Fantasies of Miscegenation belongs on the bookshelf of every serious scholar and student of film."—Richard John Ascarate, MEDIEN

"This could be the most important book published on film and race in America. It contains superior film analysis, a strong sense of film history, and breathtaking insights."—Thomas Gunning, University of Chicago

"This was an exciting book to read. Courtney is a rigorous, often brilliant scholar."—Charles Musser, Yale University