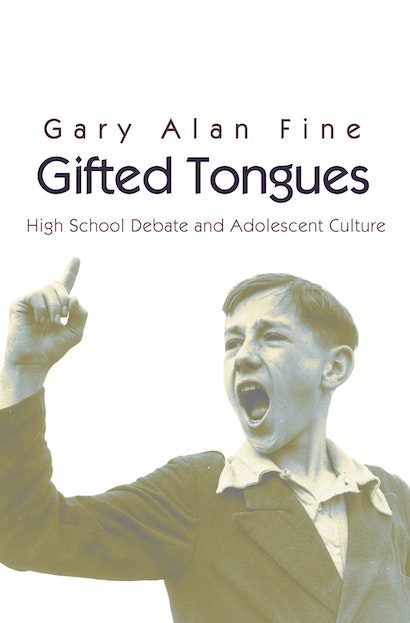 Learning to argue and persuade in a highly competitive environment is only one aspect of life on a high-school debate team. Teenage debaters also participate in a distinct cultural world — complete with its own jargon and status system — in which they must negotiate complicated relationships with teammates, competitors, coaches, and parents as well as classmates outside the debating circuit. In Gifted Tongues, Gary Alan Fine offers a rich description of this world as a testing ground for both intellectual and emotional development, while seeking to understand adolescents as social actors. Considering the benefits and drawbacks of the debating experience, he also recommends ways of reshaping programs so that more high schools can use them to boost academic performance and foster specific skills in citizenship.


Fine analyzes the training of debaters in rapid-fire speech, rules of logical argumentation, and the strategic use of evidence, and how this training instills the core values of such American institutions as law and politics. Debates, however, sometimes veer quickly from fine displays of logic to acts of immaturity — a reflection of the tensions experienced by young people learning to think as adults. Fine contributes to our understanding of teenage years by encouraging us not to view them as a distinct stage of development but rather a time in which young people draw from a toolkit of both childlike and adult behaviors. A well-designed debate program, he concludes, nurtures the intellect while providing a setting in which teens learn to make better behavioral choices, ones that will shape relationships in their personal, professional, and civic lives.

Gary Alan Fine is Professor of Sociology at Northwestern University. He is the author of Morel Tales: The Culture of Mushrooming, Kitchens: The Culture of Restaurant Work, and With the Boys: Little League Baseball and Preadolescent Culture.

"A well documented portrait of high school debate, exploring its culture and offering theoretical insight about argumentation and adolescence. . . . The clarity, readability, and insight of Fine's writing make the book important and accessible for those who work with adolescents, whether in activities such as debate in a classroom, or in a community setting."—Erik W. Larson, Contemporary Sociology

"Fine very accurately pinpoints the specific task the high school debates take on within the whole range of discourse, but never lets its cultural aspects move far out of sight. It is this combination of keen observations, interpretation and cultural reflection that makes the book a very useful piece of information for anyone interested in American adolescent culture."—Anouk van Aanholt, American Studies International

"An illuminating and considered look into the world of competitive high school policy debate that reveal—all at once—the good, the bad, the peculiar, the ugly, and the truly remarkable about high school debate."—Timothy M. O'Donnell, Argumentation and Advocacy

"Gifted Tongues is a judicious, clear, and entertaining read. Fine's story is well prepared with rich anecdotes and tidbits from a youthfully passionate community with intellectual resources beyond their years. . . . Fine exposes the world of high school policy debate with an outsider's fascination and an insider's precision."—Eli Brennan, Controversia

"Gifted Tongues offers a subtle, nuanced examination of a previously unstudied social world. It is well written, persuasively argued, and absolutely fascinating. This book will be of value to social psychologists, sociologists of culture, and to readers concerned about adolescence and education. There are also many debate coaches and legions of former debaters who, like myself, will find it interesting to discover what has happened to high school debate."—Joel Best, University of Delaware

"Alan Fine describes in rich, sociological detail the 'adolescent social world' of the high-school debater in the United States, from the mundane tasks of cutting evidence cards for debate to the highly charged atmosphere of a debate tournament. Most studies of adolescents have focused on such topics as the Columbine shootings, but it is important that we understand the nature of 'normal' adolescents outside the therapeutic or sensationalized settings. Gifted Tongues is a welcome change, one that reveals through an instructive case study some of the everyday dilemmas arising in the socialization of middle-class teens."—Jay Mechling, University of California, Davis