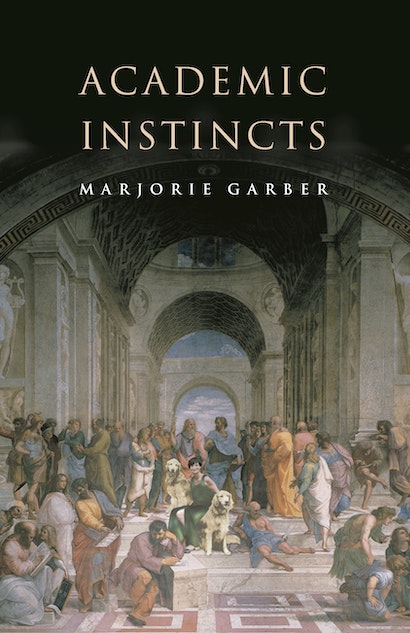 In this lively and provocative book, cultural critic Marjorie Garber, who has written on topics as different as Shakespeare, dogs, cross-dressing, and real estate, explores the pleasures and pitfalls of the academic life. Academic Instincts discusses three of the perennial issues that have surfaced in recent debates about the humanities: the relation between “amateurs” and “professionals,” the relation between one academic discipline and another, and the relation between “jargon” and “plain language.” Rather than merely taking sides, the book explores the ways in which such debates are essential to intellectual life. Garber argues that the very things deplored or defended in discussions of the humanities cannot be either eliminated or endorsed because the discussion itself is what gives humanistic thought its vitality.


Written in spirited and vivid prose, and full of telling detail drawn both from the history of scholarship and from the daily press, Academic Instincts is a book by a well-known Shakespeare scholar and prize-winning teacher who offers analysis rather than polemic to explain why today’s teachers and scholars are at once breaking new ground and treading familiar paths. It opens the door to an important nationwide and worldwide conversation about the reorganization of knowledge and the categories in and through which we teach the humanities. And it does so in a spirit both generous and optimistic about the present and the future of these disciplines.

Marjorie Garber is William R. Kenan, Jr. Professor of English at Harvard University and Director of Harvard's Humanities Center in the Faculty of Arts and Sciences. The author of ten books, most recently Quotation Marks and The Medusa Reader, she is also the editor of many collections of essays and a regular contributor to the New York Times, the Atlantic Monthly, and other publications.

"Seductively slim, witty . . .The book is, in effect, an elegant demonstration of the nature of dialectical thinking as applied to some of the hot topics of the recent culture wars."—The Economist

"It is sometimes more provoking than provocative, but it is always interesting. In her willingness to theorize on just about any subject and her delight in taking eccentric positions, I don't believe there is anyone like Marjorie Garber writing today."—Katherine Govier, Toronto Globe and Mail

"Garber's own writing is, as you would hope, admirably clear. She does a fine job of persuading us that these controversies are a sign of cultural vitality. . . ."—Jon Turney, New Scientist

"More breezy than scholarly in this book, Garber straddles the divide between the academy and the popular press with aplomb. Reading Academic Instincts is like sharing the newspaper with a current events junkie who can't help but comment on everything that catches her eye."—Leah Platt, American Prospect

"I have been waiting for years for a book about my profession as vital and zesty as Academic Instincts. Now Marjorie Garber has written it with her customary fireworks, learning, and flair. It should change our minds about academic life—for the better."—Catharine R. Stimpson, New York University

"In Academic Instincts—a bravura inspection of various foibles and follies currently besetting the academic humanities—Marjorie Garber reveals herself as an ideal tour guide: energetic, canny, jocund, illuminating, and as wicked as she needs to be. Yet even as she skewers the amour-propre of contemporary pedants and pullulaters, she also offers a passionate defense of the intellectual enterprise itself. Garber's book is solace as well as sortie: a potent affirmation of our noblest 'academic instincts' and the quest after truth they continue to embody."—Terry Castle, Stanford University

"Marjorie Garber's Academic Instincts is a light, tripping, subtle argument in defense of the academic profession. It is itself a fascinating instance of refusing 'to have arbitrary lines drawn between things: between old masterpieces and contemporary works, between art and the rest of the world, between criticism and conversation.'"—Alexander Nehamas, Princeton University