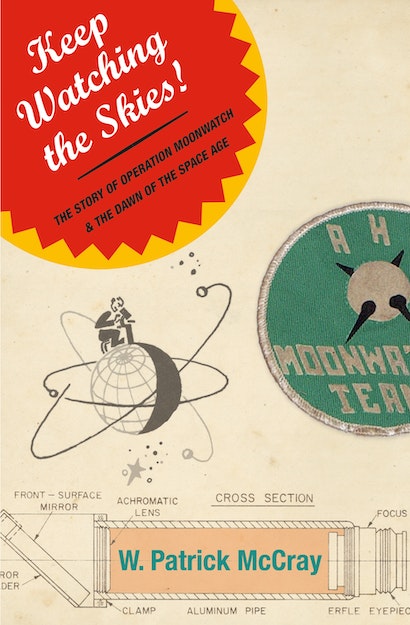 When the Soviets launched Sputnik in 1957, thousands of ordinary people across the globe seized the opportunity to participate in the start of the Space Age. Known as the “Moonwatchers,” these largely forgotten citizen-scientists helped professional astronomers by providing critical and otherwise unavailable information about the first satellites. In Keep Watching the Skies!, Patrick McCray tells the story of this network of pioneers who, fueled by civic pride and exhilarated by space exploration, took part in the twentieth century’s biggest scientific endeavor.

Around the world, thousands of teenagers, homemakers, teachers, amateur astronomers, and other citizens joined Moonwatch teams. Despite their diverse backgrounds and nationalities, they shared a remarkable faith in the transformative power of science — a faith inspired by the Cold War culture in which they lived. Against the backdrop of the space race and technological advancement, ordinary people developed an unprecedented desire to contribute to scientific knowledge and to investigate their place in the cosmos. Using homemade telescopes and other gadgets, Moonwatchers witnessed firsthand the astonishing beginning of the Space Age. In the process, these amateur scientists organized themselves into a worldwide network of satellite spotters that still exists today.

Drawing on previously unexamined letters, photos, scrapbooks, and interviews, Keep Watching the Skies! recreates a pivotal event from a perspective never before examined — that of ordinary people who leaped at a chance to take part in the excitement of space exploration.

W. Patrick McCray is professor of history at the University of California, Santa Barbara. He is the author of Giant Telescopes: Astronomical Ambition and the Promise of Technology. 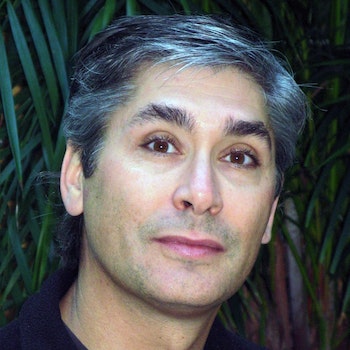 "At a time when very little was known about the ionosphere and upper atmosphere, armchair astronomers of all backgrounds turned out in the thousands to aid the scientific pursuit of knowledge; when the Soviet Union launched Sputnik in 1957, it was the Moonwatchers who provided the first observations to astronomers. McCray's history is full of fascinating individuals. This pop science takes a fascinating look at a fundamental, and almost-forgotten, moment in Space Age history."—Publishers Weekly

"Patrick McCray reconstructs an era when the world was taking its baby steps into the space age. He views it through the eyes of amateur star-gazers who experienced the excitement of those Sputnik days by joining Moonwatch, a worldwide effort to track satellites. McCray went beyond the official documents, ferreting out records from several of the most effective team leaders, and spotlights these throughout his well-illustrated presentation. McCray's account is an important contribution towards preserving the history of a fascinating episode at the dawn of the space age. [A] genuine page-turner."—Owen Gingerich, Nature

"Keep Watching the Skies! is the story of the worldwide effort...by amateur astronomers...to monitor the artificial moon Sputnik 1 launched by the Soviet space programme. This book is a superb history."—Colin Pillinger, Times Higher Education

"Patrick McCray's book tells the story of [the] devoted 'Moonwatchers' as they embarked upon Operation Moonwatch, to carefully study early satellite activity. McCray's text is meticulous, well written and follows the stories of the fabled Moonwatchers. If you want to explore the fascinating task that this diverse worldwide ensemble of amateurs and professionals undertook, this book would be an excellent place to start."—Will Gater, BBC Focus Magazine

"[A] serious, scholarly work written in an easy informal style. For the first time this important part of space history has been documented; McCray's book really brings the players to life and is highly recommended."—Nick Quinn, Astronomy Now

"In Keep Watching the Skies! McCray succeeds in bringing back to life an era that few today will remember."—Richard Corfield, Physics World

"This book is an excellent history of an important but little-known program that came into existence at the dawn of the space age. McCray clearly tells the story of how Operation Moonwatch recruited and trained ordinary people to spot and track satellites. . . . This excellent volume provides a good overview and includes extensive references for those who wish to delve deeper into the subject."—D.B. Mason, Choice

"This is a fascinating look at the dawn of the Space Age—and the ripple effect created by the former Soviet Union's launching of Sputnik 1 back in October 1958. However, the focus of this book is unique in that it tells the story of how the general public—from teenagers to amateur astronomers and others took part in eying for the first time an artificial satellite of the Earth."—Coalition for Space Exploration

"McCray successfully conveys a sense of their motivation, passion, and achievement through his presentation of lively materials from their scrapbooks, observation logs, and collections as well as personal interviews. . . . This book reminds us that the pursuit of science is a matter of state and society, in which we as citizens have rights and obligations to know and to participate."—Chihyung Jeon, Technology and Culture

"McCray has given us a highly nuanced, eminently readable, and meticulously researched account of an unusual subject. . . . In addition to documenting an important scientific program for the first time, McCray's volume represents an excellent addition to an important body of work on the relationship between amateur and professional scientists."—Steven J. Dick, Isis

"As the quality of amateur astronomical photography, given advances in electronic imaging and computer processing, begins to exceed the quality of images from the world's largest telescopes of decades ago, McCray's book provides an interesting and pleasant way to bring us back to an earlier age."—Jay Pasachoff, Phi Beta Kappa Key Reporter

"Eagerly peering into the predawn skies of October 1957, amateur scientists kept watch for a glimpse of a faint dot in the sky: Sputnik! Patrick McCray tells us who these people were and how their observations helped Operation Moonwatch become a rousing success for Fred Whipple and the scientists of the Smithsonian Astrophysical Observatory. Keep Watching the Skies! highlights this unique alliance of amateur and professional scientists at the dawn of the Space Age. If you are among those who remember the thrill of the first satellites—even more so if you are not—you need to read this book."—Robert P. Kirshner, author of The Extravagant Universe

"Patrick McCray has produced a gem! With the aid of meticulous research, he has unearthed the story of Operation Moonwatch and some of the forgotten heroes of the early years of the Space Age. They were the worldwide citizen-scientists who monitored the orbits of the early satellites. He has brought the era alive. A great read for scientists, engineers, historians—and anyone interested in the Space Age."—John Zarnecki, Open University

"A unique and valuable cultural history of what was the largest collaboration between amateur and professional scientists in history, this book will interest anyone who wishes to know more about the early days of the Space Age."—Charles Whitney, professor emeritus of astronomy, Harvard University

"Keep Watching the Skies! makes a compelling case for the importance of an aspect of the early space race that has largely been ignored: Operation Moonwatch. In contrast to the top-down approach that has dominated histories of the space race, this book gives us a bottom-up view, and it promises to be received as a major contribution to the history of science and technology."—Robert Smith, author of The Space Telescope: A Study of NASA, Science, Technology, and Politics