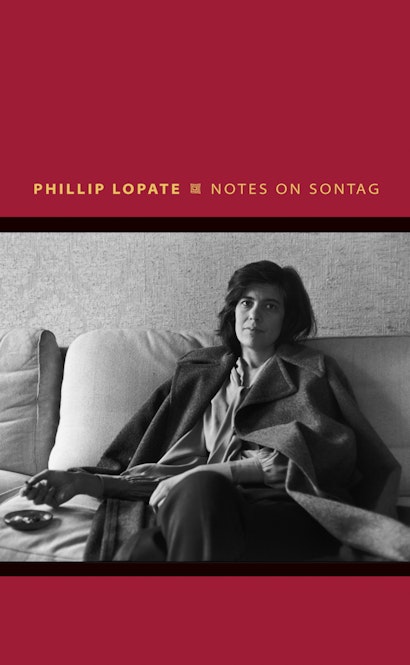 Notes on Sontag is a frank, witty, and entertaining reflection on the work, influence, and personality of one of the “foremost interpreters of … our recent contemporary moment.” Adopting Sontag’s favorite form, a set of brief essays or notes that circle around a topic from different perspectives, renowned essayist Phillip Lopate considers the achievements and limitations of his tantalizing, daunting subject through what is fundamentally a conversation between two writers. Reactions to Sontag tend to be polarized, but Lopate’s account of Sontag’s significance to him and to the culture over which she loomed is neither hagiography nor hatchet job. Despite admiring and being inspired by her essays, he admits a persistent ambivalence about Sontag. Lopate also describes the figure she cut in person through a series of wry personal anecdotes of his encounters with her over the years.


Setting out from middle-class California to invent herself as a European-style intellectual, Sontag raised the bar of critical discourse and offered up a model of a freethinking, imaginative, and sensual woman. But while crediting her successes, Lopate also looks at how her taste for aphorism and the radical high ground led her into exaggerations that could do violence to her own common sense, and how her ambition to be seen primarily as a novelist made her undervalue her brilliant essays. Honest yet sympathetic, Lopate’s engaging evaluation reveals a Sontag who was both an original and very much a person of her time.

Phillip Lopate is the author of many books, including the essay collections Getting Personal (Basic), Against Joie de Vivre (Simon & Schuster), Portrait of My Body (Doubleday), and Bachelorhood (Little, Brown), as well as the anthology, The Art of the Personal Essay (Doubleday). Among his other books is Waterfront: A Walk around Manhattan (Crown). He teaches writing at Columbia University, and lives in Brooklyn, New York.

"With the thoroughness and clarity of a latter-day Edmund Wilson and an urbanity and wit that are all his own, Phillip Lopate has given us, in the modest guise of these Notes, an extraordinarily rewarding study."—Rachel Hadas, Times Literary Supplement

"Notes on Sontag achieves a remarkable evenhandedness, caressing even as it kicks. The author gives ample credit where it's due, particularly when he champions Sontag's unparalleled aphoristic style and her essays. Throughout, Lopate, a beautiful and sometimes very funny writer, exudes a relaxed self-awareness about his own strengths and weaknesses, admitting, for instance, that he once sought Sontag's approval (she was an acquaintance). In the end, his toughness and self-knowledge actually enhance his praise. He takes Sontag seriously, and even if he finds her ridiculous at times, his persuasive prose makes it clear that he misses her: 'Sontag's best ruminations have a power and cohesion that merit countless revisitation, both to savor their insights and wonder how she did it.'"—Time Out New York

"Lopate has produced an absolute gem of a book. In places personal (he knew Sontag for many years), but more often focused on the work itself—essays, fiction, films, reviews—this book stands as the best appreciation of Sontag in print and is an ideal introduction to this major American thinker."—Choice

"Lopate's book . . . is a deeply personal study of an intellect and a provocative public figure. It is an excellent introduction to Sontag, a brief yet tantalizing piece of work for those inspired by, and those who wish to discover, her."—Anette Carter, Women's News

"A reflection on both Sontag's specific oeuvre and literary life in general, Notes on Sontag. will reward both those who know Sontag's work well and those only beginning to make her acquaintance."—Jennifer Burns, Virginia Quarterly Review

"A multi-level monograph that deals with her life and writings together and takes a deep bite out of the cultural issues that Sontag's journals merely make a dent in, such as her ability to make a fictional character out of herself and in fact to build a whole narrative style without recourse to psychology. Lopate is also a clear and careful writer of prose."—George Fetherling, Vancouver Sun

"Phillip Lopate is so sensible that we can overlook just how smart and audacious he also is. In Notes on Sontag, he manages a dazzling, melancholy anatomy as Robert Burton would have understood the notion, and his interrogation of Sontag is all the more impressive and resonant because this is a self-interrogation too, shrewd, ardent, skeptical, canny."—Robert Polito, director of the New School Writing Program

"Susan Sontag was an indispensable writer, and she has now been engaged by an equally indispensable writer whose essential charm, irreverence, and gift for the unexpected make him an ideal guide to Sontag's work. Lopate's book is at once intensely personal and rigorous, never less than passionate in its commitment to what is most bracing and individual in Sontag's writing."—Robert Boyers, editor of Salmagundi

"This is just what we need: a book on Susan Sontag by a writer allergic to hype and genuinely fascinated by Sontag's ideas and the implications of her cultural presence. Lopate is exacting in his estimates—able to praise and criticize with equal sureness. He speaks straight, from eye-level, as a literary colleague: he knew Sontag and has heard all the stories. More important, he knows the work and its subjects—the novels, films, and debates—deeply. Notes on Sontag is a portrait of the author; it is also a portrait of an era in American intellectual life."—Sven Birkerts, author of Reading Life: Books for the Ages

"Lopate and Sontag are an inspired pairing. Lopate has just the right distance on Sontag—neither sycophant nor peer—to write trenchantly and sympathetically about her achievements, but he's also unsparing about her occasional idiocies. Some of the best things in the book are the personal vignettes about close encounters with Sontag, where Lopate stands in for the reader and fan, often getting burned in the process."—Christopher Benfey, Mount Holyoke College