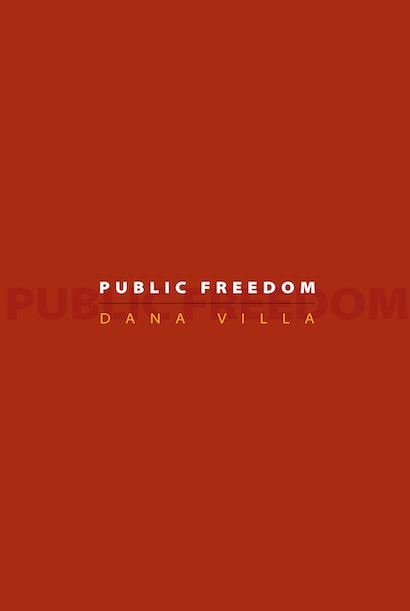 The freedom to take part in civic life — whether in the exercise of one’s right to vote or congregate and protest — has become increasingly less important to Americans than individual rights and liberties. In Public Freedom, renowned political theorist Dana Villa argues that political freedom is essential to both the preservation of constitutional government and the very substance of American democracy itself.


Through intense close readings of theorists such as Hegel, Tocqueville, Mill, Adorno, Arendt, and Foucault, Villa diagnoses the key causes of our democratic discontent and offers solutions to preserve at least some of our democratic hopes. He demonstrates how Americans’ preoccupation with a market-based conception of freedom — that is, the personal freedom to choose among different material, moral, and vocational goods — has led to the gradual erosion of meaningful public participation in politics as well as diminished interest in the health of the public realm itself. Villa critically examines, among other topics, the promise and limits of civil society and associational life as sources of democratic renewal; the effects of mass media on the public arena; and the problematic but still necessary ideas of civic competence and democratic maturity.

Public Freedom is a passionate and insightful defense of political liberties at a moment in America’s history when such freedoms are very much at risk.

Dana Villa is the Packey J. Dee Professor of Political Theory at the University of Notre Dame. He is the author of Socratic Citizenship; Politics, Philosophy, Terror; and Arendt and Heidegger: The Fate of the Political (all Princeton).

"In his argument for a more vital and robust public square and a more capacious conception of freedom, Villa makes a substantial contribution, both to the political theory literature and to a more textured understanding of the nature of a genuinely free society."—Sheila Suess Kennedy, Law and Politics

"Public Freedom breaks new ground. Villa's stance is distinctive and compelling. He writes with confidence and authority. The book is full of subtle, important, and in some cases controversial readings of major thinkers and represents a significant move forward in Villa's own thinking, placing him into conversation with some unexpected intellectual traditions, and also disclosing some revisions to his own earlier positions. Public Freedom is an impressive and successful piece of work."—Patchen Markell, University of Chicago

"A significant contribution to the field of political theory. Public Freedom is a wide-ranging and thought-provoking inquiry into the problem of civic life as viewed by a group of important nineteenth- and twentieth-century political theorists. With its reconsideration of the relationship between public freedom and civil society, the book has done something new and it should gain a good deal of attention."—James Schmidt, Boston University