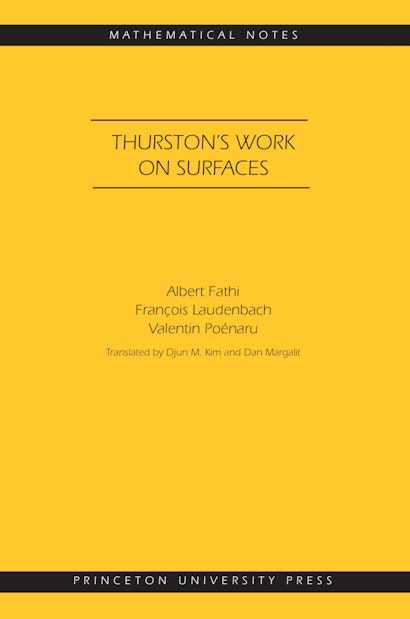 This book provides a detailed exposition of William Thurston’s work on surface homeomorphisms, available here for the first time in English. Based on material of Thurston presented at a seminar in Orsay from 1976 to 1977, it covers topics such as the space of measured foliations on a surface, the Thurston compactification of Teichmüller space, the Nielsen-Thurston classification of surface homeomorphisms, and dynamical properties of pseudo-Anosov diffeomorphisms. Thurston never published the complete proofs, so this text is the only resource for many aspects of the theory.

Thurston was awarded the prestigious Fields Medal in 1982 as well as many other prizes and honors, and is widely regarded to be one of the major mathematical figures of our time. Today, his important and influential work on surface homeomorphisms is enjoying continued interest in areas ranging from the Poincaré conjecture to topological dynamics and low-dimensional topology.

Conveying the extraordinary richness of Thurston’s mathematical insight, this elegant and faithful translation from the original French will be an invaluable resource for the next generation of researchers and students.

"[T]he translation is a most welcome addition for those who use FLP as a reference. . . . It is the reviewer's hope that this new version will also introduce Thurston's brilliant insights and imagination to even wider audiences and help inspire the present and future generations to pick up where he left off."—Dan Margalit, Bulletin of the American Mathematical Society