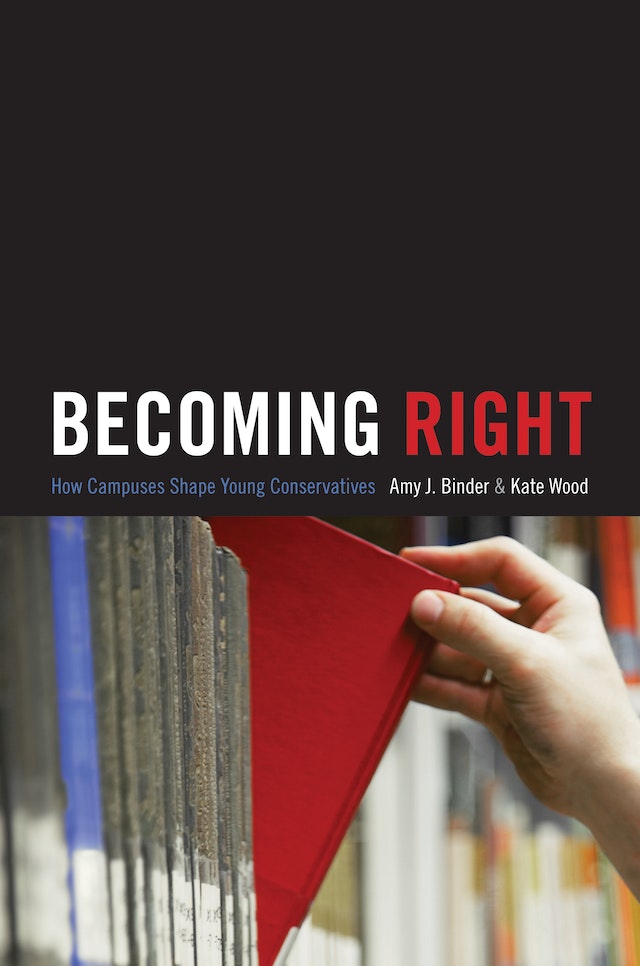 Conservative pundits allege that the pervasive liberalism of America’s colleges and universities has detrimental effects on undergraduates, most particularly right-leaning ones. Yet not enough attention has actually been paid to young conservatives to test these claims—until now. In Becoming Right, Amy Binder and Kate Wood carefully explore who conservative students are, and how their beliefs and political activism relate to their university experiences.

Amy J. Binder is professor of sociology at the University of California, San Diego. She is the author of Contentious Curricula: Afrocentrism and Creationism in American Public Schools (Princeton). Kate Wood is an independent scholar. 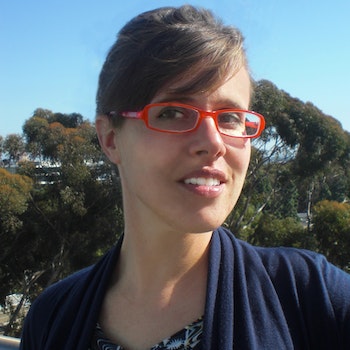 "A deep dive into the under-examined world of campus conservatives, Amy J. Binder and Kate Wood's book can feel like an anthropological account of a disappearing tribe. . . . Binder and Wood's findings add an important dimension to our understanding of the right. The last two decades have seen historians and political scientists extensively study the rise of conservatism. A trenchant addition to that literature, Becoming Right offers a thick description of the state of college conservatism and explains the factors that shape the student—and, it follows, the citizen. The authors' interrogations leave the promise of a better politics hanging in the air: if Binder and Wood are accurate in their depictions, campus cultures that seek to build a stronger sense of community and ideological tolerance could be one key to a more civil national discourse. The book also enriches our understanding of the right's mentality. . . . Becoming Right yields many valuable insights about the possible future of conservatism. But the vision this illuminating book most vividly conjures is the depressing present of conservatism: ugly, unyielding, and provocative to the point of nihilism."—Elbert Ventura, New Republic

"In Becoming Right, Amy Binder and Kate Wood provide an in-depth and informative examination of who the conservatives are, the impact of campus culture on the formation of their identities and activist styles, and the implications for the direction of U.S. politics."—Glenn Altschuler, Boston Globe

"[I]f the intellectual interest of this book is the demonstration of how much influence the kind of university has on its students' political culture, a pleasure for the reader is the revelation of the sheer good nature of so many of the study's interviewees; they come across as pretty muddled on many issues but astonishingly rarely as nasty."—Alan Ryan, Times Higher Education

"[A] nice discussion of the larger field of conservative politics and how that affects campus protest. Overall, a solid book and one that's essential to studies of campus politics."—Fabio Rojas, Orgtheory.net

"Their book [is an] excellent, engaging, well written, and carefully researched study of the ways culture works in and through schools."—Lisa M. Stulberg, Contexts

"In their important contribution to the scholarship on modern American conservative movement politics, Binder and Wood analyze the varying experiences of conservative student activists on university campuses. The book succeeds on multiple levels."—Choice

"[T]he book is masterfully constructed and extensive in its articulation of the styles of young conservatives and how these diverge into political classes that may share many political beliefs but nevertheless seem worlds apart."—Jeremy Freese, American Journal of Sociology

"[T]his study offers as . . . insight . . . and permits . . . questions to reemerge [that] make this book an important and exciting contribution."—Gregory Smulewicz-Zucker, Critical Sociology

"Becoming Right is a valuable sociological contribution to the scholarship on American conservatism, and a book that should definitely be read by everyone who studies conservatives."—Louis Prisock, Social Forces

"The fact that this study offers as much insight as it does and permits such questions to reemerge makes this book an important and exciting contribution."—Gregory Smulewicz-Zucker, Critical Sociology

"Becoming Right vividly illustrates how conservative students experience the university—and how these experiences differ by campus. This beautifully written book is a must read for anyone who seeks to understand the political socialization of conservative leaders and the sources of cleavages within contemporary conservative politics. Appealing to a wide audience, this is a powerful and original approach to the analysis of undergraduate life."—Elizabeth Armstrong, University of Michigan

"Social scientists have paid surprisingly little attention to conservative college students. Becoming Right remedies this with a penetrating analysis of the diverse political styles that can be found among students on the right, and of the campus settings that foster them. This important contribution to political sociology and the sociology of higher education has lessons to teach all readers about the complexity of the conservative movement and the passions of conservative collegians."—Neil Gross, University of British Columbia

"Offering a fascinating and nuanced portrait of young conservatives and their political commitments, Binder and Wood provide invaluable insight into this important but overlooked segment of American politics. Their analysis also illuminates the ways in which universities shape political identity and behavior, and is certain to stimulate new inquiries into the formation of political culture."—Julie A. Reuben, Harvard University

"The rise of conservatism on campus has been a central priority of well-funded think tanks and advocacy groups in their efforts to keep the pipeline full of potential leaders for each new generation. This splendid study of the contemporary campus right fills a huge gap in the public's understanding of the most recent wave of conservative cadre building."—Paul J. DiMaggio, Princeton University

"Becoming Right marshals novel, nuanced material to depict styles of conservative political organization at two U.S. universities. The big finding is that organizational context matters—a lot—for how undergraduates come to think of themselves as political subjects, how they act and react toward their campuses, and how they imagine their own futures. This book clearly demonstrates that political actors are made, not born."—Mitchell L. Stevens, Stanford University