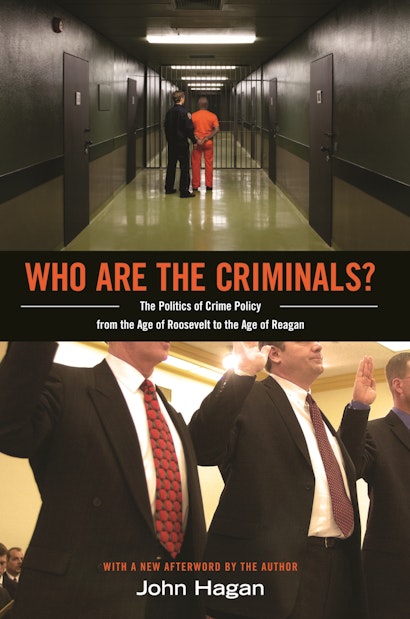 How did the United States go from being a country that tries to rehabilitate street criminals and prevent white-collar crime to one that harshly punishes common lawbreakers while at the same time encouraging corporate crime through a massive deregulation of business? Why do street criminals get stiff prison sentences, a practice that has led to the disaster of mass incarceration, while white-collar criminals, who arguably harm more people, get slaps on the wrist—if they are prosecuted at all? In Who Are the Criminals?, one of America’s leading criminologists provides new answers to these vitally important questions by telling how the politicization of crime in the twentieth century transformed and distorted crime policymaking and led Americans to fear street crime too much and corporate crime too little.

John Hagan argues that the recent history of American criminal justice can be divided into two eras — the age of Roosevelt (roughly 1933 to 1973) and the age of Reagan (1974 to 2008). A focus on rehabilitation, corporate regulation, and the social roots of crime in the earlier period was dramatically reversed in the later era. In the age of Reagan, the focus shifted to the harsh treatment of street crimes, especially drug offenses, which disproportionately affected minorities and the poor and resulted in wholesale imprisonment. At the same time, a massive deregulation of business provided new opportunities, incentives, and even rationalizations for white-collar crime—and helped cause the 2008 financial crisis and subsequent recession.

The time for moving beyond Reagan-era crime policies is long overdue, Hagan argues. The understanding of crime must be reshaped and we must reconsider the relative harms and punishments of street and corporate crimes. In a new afterword, Hagan assesses Obama’s policies regarding the punishment of white-collar and street crimes and debates whether there is any evidence of a significant change in the way our country punishes them.

John Hagan is the John D. MacArthur Professor of Sociology and Law at Northwestern University and codirector of the Center on Law and Globalization at the American Bar Foundation. He received the Stockholm Prize in Criminology in 2009. His books include Darfur and the Crime of Genocide.

"Oftentimes the early optimism of what one hopes to learn from a book ends in disappointment, but every once in a while a book lives up to its promise and you end with a refrain such as 'I wish I had written this book.' This phrase characterizes my feelings on John Hagan's Who Are the Criminals?."—John H. Kramer, American Journal of Sociology

"Hagan, one of the world's leading sociologists, explores the basis of modern US crime policy from the early 20th century to the present. . . . Thoughtful readers should reflect on the author's eminently sensible and workable suggestions for redirecting the nation's crime policies so that they are both more effective and less expensive. If someone has time to read only one book on contemporary crime and crime policy, this is the book."—Malcolm Feeley, Choice

"The strength of Who Are the Criminals? is that Hagan shows the reader that they do not exist in separate spheres and are interconnected. Although the author is a sociologist and a criminologist, this book should appeal to political scientists—especially those who are concerned about political framing and the building of the criminal justice state."—Megan Francis, Perspectives on Politics

"This critically important book offers an incisive analysis of the links between the increase in incarceration for street crime in the last several decades and deregulation of the business suites. It is simultaneously a scholarly tour de force and a sweeping indictment of the political uses of crime."—Kitty Calavita, University of California, Irvine

"John Hagan shows that the stories of street crime and white-collar crime are not separate, but interwoven. He also closely ties together the histories of politics, policymaking, criminal justice practice, and criminological thought. This book could only have been written by someone with the expertise that Hagan has amassed over many decades of intense and extremely productive research. This is a significant contribution indeed."—Joachim J. Savelsberg, University of Minnesota

"This is an important and in many respects brilliant book. The analyses of criminology in the ages of Roosevelt and Reagan are masterful. At its most ambitious, the book aspires to frame a new kind of criminology that breaks with the belief that government stands between society and the dangerous. This is an exciting vision."—Jonathan Simon, University of California, Berkeley