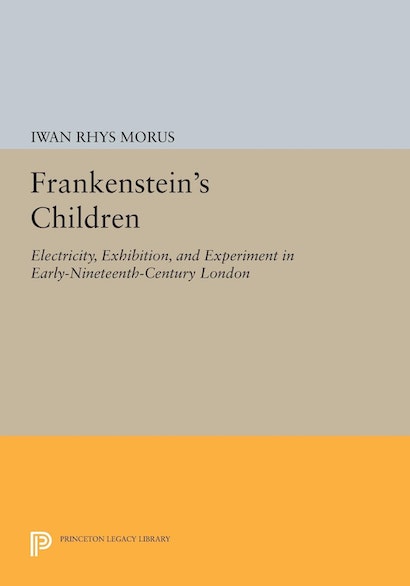 During the second quarter of the nineteenth century, Londoners were enthralled by a strange fluid called electricity. In examining this period, Iwan Morus moves beyond the conventional focus on the celebrated Michael Faraday to discuss other electrical experimenters, who aspired to spectacular public displays of their discoveries. Revealing connections among such diverse fields as scientific lecturing, laboratory research, telegraphic communication, industrial electroplating, patent conventions, and innovative medical therapies, Morus also shows how electrical culture was integrated into a new machine-dominated, consumer society. He sees the history of science as part of the history of production, and emphasizes the labor and material resources needed to make electricity work.

Frankenstein’s Children explains that Faraday, with his colleagues at the Royal Society and the Royal Institution, looked at science as the province of a highly trained elite, who presented their abstract picture of nature only to select groups. The book contrasts Faraday’s views with those of other practitioners, to whom science was a practical, skill-based activity open to all. In venues such as the Galleries of Practical Science, electrical phenomena were presented to a public less distinguished but no less enthusiastic and curious than Faraday’s audiences. William Sturgeon, for instance, emphasized building apparatus and exhibiting electrical phenomena, while chemists, instrument-makers, and popular lecturers supported the London Electrical Society. These previously little studied “electricians” contributed much to the birth of “Frankenstein’s children” — the not completely benign effects of electricity on a new consumer world.

"A fine book. . . . [It] adds substantially to our understanding not only of the history of electricity but also of a seminal period in the emergence of modern science and technology."—Bruce J. Hunt