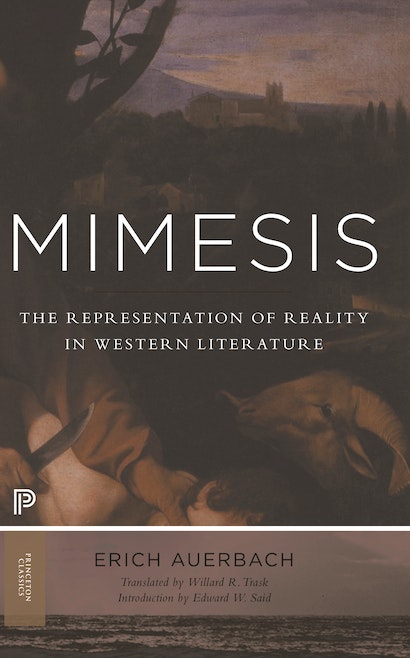 More than half a century after its translation into English, Erich Auerbach’s Mimesis remains a masterpiece of literary criticism. A brilliant display of erudition, wit, and wisdom, his exploration of how great European writers from Homer to Virginia Woolf depicted reality has taught generations how to read Western literature. This new expanded edition includes a substantial essay in introduction by Edward Said as well as an essay, never before translated into English, in which Auerbach responds to his critics.


A German Jew, Auerbach was forced out of his professorship at the University of Marburg in 1935. He left for Turkey, where he taught at the state university in Istanbul. There he wrote Mimesis, publishing it in German after the end of the war. Displaced as he was, Auerbach produced a work of great erudition that contains no footnotes, basing his arguments instead on searching, illuminating readings of key passages from his primary texts. His aim was to show how from antiquity to the twentieth century literature progressed toward ever more naturalistic and democratic forms of representation. This essentially optimistic view of European history now appears as a defensive — and impassioned — response to the inhumanity he saw in the Third Reich. Ranging over works in Greek, Latin, Spanish, French, Italian, German, and English, Auerbach used his remarkable skills in philology and comparative literature to refute any narrow form of nationalism or chauvinism, in his own day and ours.


For many readers, both inside and outside the academy, Mimesis is among the finest works of literary criticism ever written. This Princeton Classics edition includes a substantial introduction by Edward Said as well as an essay in which Auerbach responds to his critics.

Erich Auerbach, before his death in 1957, was Sterling Professor of Romance Languages at Yale University.

"The compass and the richness of the book can hardly be exaggerated. This is true too of the originality of Mr. Auerbach's critical method which is at once encyclopedic and microscopic, combining the disciplines of philology, literary criticism, and history."—New York Times

"One of the great works of literary scholarship. . . . Auerbach's method . . . is to fasten with fastidious sensitivity on some stray phrase or passage in order to unpack from it a wealth of historical insight. It is his combination of scholarly erudition and critical astuteness which is most remarkable."—Terry Eagleton, London Review of Books

"One of the most important and readable books in literary criticism of the past 15 years . . . The author, beginning with Homer and the Bible, traces the imitation of life in literature through the ages . . .touching upon every major literary figure in western culture on the way."—Publishers Weekly

"Written with the authority that comes from deep learning and full of information worth knowing. Princeton's 50th anniversary edition of Mimesis has an introduction by the late literary and cultural critic Edward Said that by itself is worth the price of the book. It's the only preface I know of that I wish were longer, serving as both an analysis of Auerbach and a ramework placing him in his scholarly and historical context. . . . Princeton's reissue of Mimesis is both timely and symbolic."—Guy Davenport, Los Angeles Times Book Review

"[Mimesis] offers not just an eminent reading of the Western canon, but a mighty lesson on how to write. . . . I don't think a more significant or useful book of criticism has been written in the half-century since Mimesis was published. What's more, I can't imagine that anything like it will ever be written again. . . . [In] producing such a rich, strong book on how to read, Auerbach composed a virtual manual on how to write, one I've referred back to again and again since the day, almost two decades ago, when I first happened upon it."—Jim Lewis, Slate Magazine

"[T]he greatest single work of literary criticism of the 20th century. . . . [S]o suggestive, so rich in understanding and insight, so useful in teaching one how to reach more deeply and appreciatively is the book that it is difficult to believe that anyone will ever again have the intellectual resources to write another book about literature anywhere near as powerful. Written while the Nazis were marching across Europe, Mimesis is a strong reminder of the glory of Western literature, and by extension of Western civilization, and of what is at stake in the battle against those who would simplify, politicize, or otherwise degrade it."—Joseph Epstein, Weekly Standard

"To describe Mimesis as a classic is to offer something of a dismissive understatement, which conveys nothing of the excitement of this book, as fresh and direct, as untechnical, as when it first appeared. To say that it constitutes virtually a history of Western literature is to omit adding that it writes that history in a way that is still new and stimulating, with nothing of the manual about it, a synchronic kind of history with which we are only just now catching up. It is also important to stress the novel relationship Auerbach establishes between sentence or syntax and narrative form; and the world-wide democratic perspective in which he framed his work which has only become visible since globalization. Mimesis is certainly one of the half dozen most important literary-critical works of the twentieth century."—Fredric R. Jameson

"Written in exile, from what Auerbach called with grave irony his 'incomparable historical vantage point,' Mimesis is a magnificent achievement. For me, as for many others, this hugely ambitious, wise account of the representation of reality in Western literature, at once a celebration and a lament, is one of the essential works of literary criticism."—Stephen Greenblatt

"Every student of literature should know Mimesis, arguably the single greatest work of 20th-century criticism. How do writers—from Homer and Dante to Stendhal and Virginia Woolf—depict the world? To explore this question, Erich Auerbach brings to bear the authority of truly encyclopedic learning and the persuasiveness of a supple, humane literary intelligence. Yes, Mimesis is magisterial, but it is also thrilling to read, inspiring, and more relevant than ever: A masterpiece."—Michael Dirda