A bold reassessment of what caused the Late Bronze Age collapse 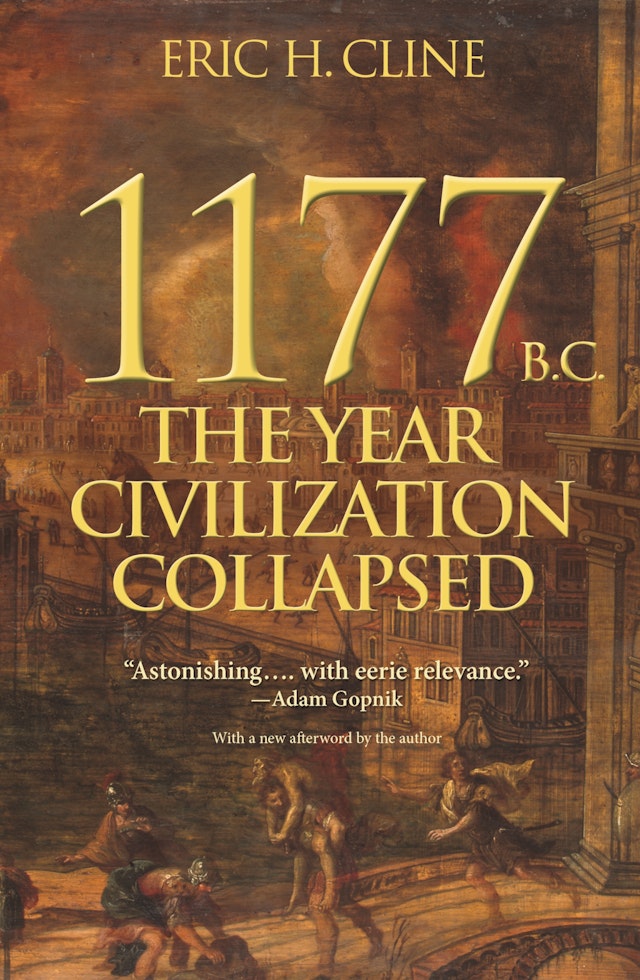 In 1177 B.C., marauding groups known only as the “Sea Peoples” invaded Egypt. The pharaoh’s army and navy managed to defeat them, but the victory so weakened Egypt that it soon slid into decline, as did most of the surrounding civilizations. After centuries of brilliance, the civilized world of the Bronze Age came to an abrupt and cataclysmic end. Kingdoms fell like dominoes over the course of just a few decades. No more Minoans or Mycenaeans. No more Trojans, Hittites, or Babylonians. The thriving economy and cultures of the late second millennium B.C., which had stretched from Greece to Egypt and Mesopotamia, suddenly ceased to exist, along with writing systems, technology, and monumental architecture. But the Sea Peoples alone could not have caused such widespread breakdown. How did it happen?

In this major new account of the causes of this “First Dark Ages,” Eric Cline tells the gripping story of how the end was brought about by multiple interconnected failures, ranging from invasion and revolt to earthquakes, drought, and the cutting of international trade routes. Bringing to life the vibrant multicultural world of these great civilizations, he draws a sweeping panorama of the empires and globalized peoples of the Late Bronze Age and shows that it was their very interdependence that hastened their dramatic collapse and ushered in a dark age that lasted centuries.

A compelling combination of narrative and the latest scholarship, 1177 B.C. sheds new light on the complex ties that gave rise to, and ultimately destroyed, the flourishing civilizations of the Late Bronze Age—and that set the stage for the emergence of classical Greece.

Eric H. Cline is professor of classics and anthropology and director of the Capitol Archaeological Institute at George Washington University. 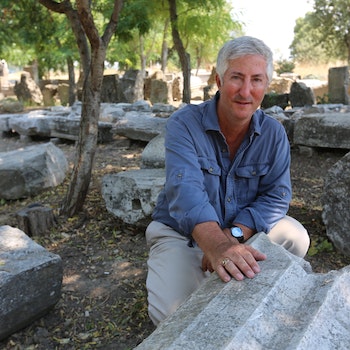 "Cline has created an excellent, concise survey of the major players of the time, the latest archaeological developments, and the major arguments, including his own theories, regarding the nature of the collapse that fundamentally altered the area around the Mediterranean and the Near East."—Evan M. Anderson, Library Journal

"This enthralling book describes one of the most dramatic and mysterious processes in the history of mankind—the collapse of the Bronze Age civilizations. Cline walks us through events that transpired three millennia ago, but as we follow him on this intriguing sojourn, lurking in the back of our minds are tantalizing, perpetual questions: How can prosperous cultures disappear? Can this happen again; to us?"—Israel Finkelstein, coauthor of, The Bible Unearthed: Archaeology's New Vision of Ancient Israel and the Origin of Its Sacred Texts

"1177 B.C. tells the story of one of history's greatest mysteries. . . . [It] is the finest account to date of one of the turning points in history."—Ian Morris, author of, Why the West Rules—for Now

"The 12th century BCE is one of the watershed eras of world history. Empires and kingdoms that had dominated late Bronze Age western Asia and the eastern Mediterranean collapsed."—Choice

"Cline explores a vast array of variables that could have led to the disruption of the society of this era, including earthquakes, famines, droughts, warfare, and, most notably, invasions by the 'Sea Peoples.'"—Publishers Weekly

"A detailed but accessible synthesis. . . . [O]ffers students and the interested lay antiquarian a sense of the rich picture that is emerging from debates among the ruins."—Scott McLemee, Inside Higher Ed

"In this enjoyable new book, Eric H. Cline has set himself an ambitious task: Not only must he educate a popular audience about the wealth and power of the eastern Mediterranean civilizations of the Bronze Age, he must then make his readers care that, some time around the year 1200 B.C., these empires, kingdoms, and cities suffered a series of cataclysms from which they never recovered."—Susan Kristol, Weekly Standard

"A wonderful example of scholarship written for the non-expert. Cline clearly pulls together the engaging story of the interactions among the major empires of the Late Bronze Age and puts forth a reasonable theory explaining why they seem to have evaporated as quickly as moisture on a hot afternoon."—Fred Reiss, San Diego Jewish World

"Cline's work reveals eerie parallels between the geopolitics of the first years of 12th century B.C. and today's 21st century. 1177 B.C.: The Year Civilization Collapsed is history, but reads like a good mystery novel. Cline draws readers into his tale, revealing surprises throughout. It is all the more fascinating for being true, and for its relevance to today's world."—Mark Lardas, Daily News

"Cline has written one of this year's most interesting books."—Jona Lendering, NRC Handelsblad

"Cline is clearly in command of the textual record and his reading of it is the book's real strength."—A. Bernard Knapp, History Today

"1177 B.C.: The Year Civilization Collapsed is a thoughtful analysis of one of the great mysteries of human history. . . . Highly recommended."—James A. Cox, Midwest Book Review

"[T]his work masterfully incorporates the present state of research into a welcome reevaluation of a period less known to the general public, the crisis of Late Bronze Age civilization. . . . [E}ven more brilliant is the spin on the similarities between the predicament of this area three millennia ago and now."—Barbara Cifola, American Historical Review

"There are few published titles which focus on the tumultuous events that took place in the Eastern Mediterranean at approximately 1200 BCE. . . . Cline's 1177 B.C.: The Year Civilization Collapsed stands out among the rest as one of the best and most thoroughly researched. . . . This book is presented as a mystery novel. . . . One thing is for certain, once started, you will not want to put it down."—Ancient Origins

"A gripping mystery story with clues to follow and evidence to analyze."—SG, Ancient Egypt Magazine

"Well-written, very fairly argued, and excellent value, it will set the agenda for Late Bronze Age studies for some time to come."—Peter Jones, Classics for All

"Fascinating. . . . [A]voids the tedium of so many academic writers."—Bruce Beresford, filmmaker

"Eric H. Cline has written a work of great scholarship, but has written in a manner so that the non-expert . . . can not only understand, but also appreciate it."—Don Vincent, Open History

"I don't know when I've appreciated a book as much as 1177 B.C. If you enjoy learning, you will enjoy this book! Highly recommended."—Thomas A. Timmes, UNRV History

"Impressively marshaling the most recent archaeological and historical evidence, Eric Cline sets the record straight: there was a 'perfect storm' of migrations, rebellions, and climate change that resulted in the collapse of states that were already unstable in the Late Bronze Age. There followed an 'age of opportunity' for new kinds of political systems and ideologies that remade the world of the eastern Mediterranean in the first millennium B.C. Onward and upward with collapse!"—Norman Yoffee, University of Michigan

"Cline has written a wonderfully researched and well-crafted overview of one of the most fascinating, complex, and debated periods in the history of the ancient world. Tying together an impressively broad range of disparate data, he weaves together a very convincing re-creation of the background, mechanisms, and results of the transition from the Late Bronze Age to the Iron Age in the eastern Mediterranean and beyond."—Aren Maeir, Bar-Ilan University

"This book is a very valuable and very timely addition to the scholarship on the end of the Late Bronze Age. Cline provides a comprehensive, interdisciplinary, and up-to-date treatment of one of the most dramatic and enigmatic periods in the history of the ancient world."—Trevor Bryce, author of, The World of the Neo-Hittite Kingdoms: A Political and Military History

"This is an excellent, thought-provoking book that brings to life an era that is not well known to most readers."—Amanda H. Podany, author of, Brotherhood of Kings: How International Relations Shaped the Ancient Near East

"Cline expertly and briskly takes the reader through the power politics of the fifteenth, fourteenth, and thirteenth centuries BC with excursuses on important archaeological discoveries and introductions for each of the major players. No reader with a pulse could fail to be captivated by the details."—Dimitri Nakassis, Mouseion

"Cline's book is something special in ancient history writing. . . . The book is up to date in its research, covers a lot of ground, is careful in its conclusions, and will be referred to and cited by students of Aegean and eastern Mediterranean prehistory, discussed by the scholarly community, as well as read by the interested public. Cline has done a good job of bringing the Late Bronze Age eastern Mediterranean to a very wide audience."—Guy D. Middleton, American Journal of Archaeology

"Remarkably prescient. . . . [A] convincing case for the relevance of ancient history to the modern world."—Canadian Journal of History

"The end of the Late Bronze Age, around the turn of the twelfth century BCE, was a civilizational collapse similar to the much better known fall of the Roman Empire seventeen centuries later. . . . The causes of this collapse have been among the enduring mysteries of ancient history and archaeology, a complicated detective story for which Eric Cline deftly serves as guide. Cline . . . presents for educated general readers a survey of the evidence and scholarship concerning the end of the Late Bronze Age. He also engagingly establishes the historical and geographical context of the collapse, complete with a motley and compelling cast of characters."—Matthew A. Sears, Canadian Journal of History

"This collapse has been a popular subject for scholars, not least our author, for a very long time. Here he usefully assembles the evidence and deduces that it was the very complexity of powers, their interrelationships through trade or war, that brought about the collapse, and he is probably right."—John Boardman, Common Knowledge

"Cline admirably acknowledges areas of existing scholarly controversy, while understandably emphasizing the consensus view in order to maintain the flow of his narrative. . . . He has a firm command of the textual, archaeological, and environmental evidence, and brings together a wealth of recent scholarship in an accessible form, a treatment which has been sorely lacking for this pivotal period. . . . [A] fine book."—Erin Warford, European Legacy