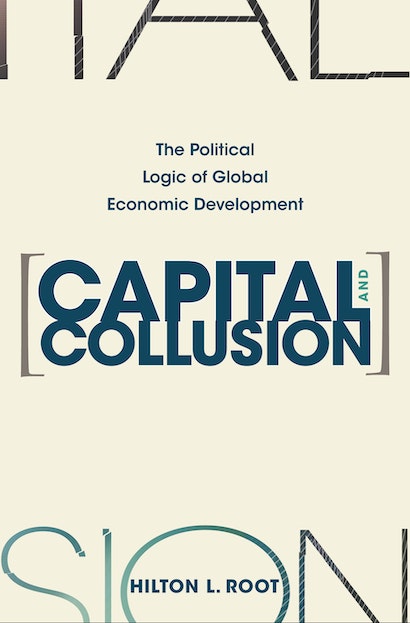 Why does capital formation often fail to occur in developing countries? Capital and Collusion explores the political incentives that either foster growth or steal nations’ growth prospects.


Hilton Root examines the frontier between risk and uncertainty, analyzing the forces driving development in both developed and undeveloped regions. In the former, he argues, institutions reduce everyday economic risks to levels low enough to make people receptive to opportunities for profit, stimulating developments in technology and science. Not so in developing countries. There, institutions that specialize in sharing risk are scarce. Money hides under mattresses and in teapots, creating a gap between a poor nation’s savings and its investment. As a consequence, the developing world faces a growing disconnect between the value of its resources and the availability of finance.


What are the remedies for eliminating this disparity? Root shows us how to close the growing wealth gap among nations by building institutions that convert uncertainty into risk. Comparing China to India, Latin America to East Asia, and contemporary to historical cases, he offers lessons that can help the World Bank and the International Monetary Fund to tackle the political incentives that are the source of poor governance in developing nations.

Hilton L. Root is a Freeman Fellow and Professor of Economics at Pitzer College and a Senior Fellow at Claremont Graduate University and the Milken Institute. He is the author of six books, including The Key to the East Asian Miracle: Making Shared Growth Credible (with J. Edgardo Campos) and The Fountain of Privilege: Political Foundations of Markets in Old Regime France and England.

"Capital and Collusion provides an interesting read for anyone attracted by the complexity of international political economic development. . . . By highlighting the forces at work in developing countries, Root addresses the notion that distribution of wealth is often complex and requires situation specific responses to nations who are hindered by collusive cultural practices."—Andrew J. Prelog, Journal of Economic Issues

"A most interesting and informative work. The book contains excellent material and interesting analysis, and it will appeal to a broad audience."—Stanley Engerman, University of Rochester

"An ambitious book, Capital and Collusion identifies the institutional reasons for the divergent growth paths of major regions in the developing world. The topic is one that will interest a broad range of readers in both academic and policy circles."—David Stasavage, London School of Economics

"Root takes a very abstract notion like trust and provides a series of concrete demonstrations of how trust, or the lack of it, can affect economic performance and social welfare. He bases his arguments very skillfully on a variety of indicators that transform abstract concepts into observable phenomena and make his arguments come to life. This is a 'must read' in graduate and undergraduate courses that focus on institutions and development."—Lewis W. Snider, author of Growth, Debt and Politics: Economic Adjustment and the Political Performance of Developing Countries

"In this exciting book, Hilton Root calls into question some of the "sacred cows" of contemporary thought, knocking down some of the rigid boundaries that exist among the social sciences and among concepts like developed and developing countries. A very good read for all."—Elinor Ostrom, Indiana University, author of Understanding Institutional Diversity

"Capital and Collusion is a breathtaking tour de force that adds significantly to the growing literature on the political economy of development and of state failure. Hilton Root has tackled the most important question facing policymakers, leaders of international financial institutions, and students of the political economy of development: how can the incentives of leaders be changed to promote risk taking and entrepreneurship, diminish uncertainty and self-insurance, and stimulate economic growth when they benefit personally from sustained national failure? No one who wishes to understand or shape economic and social welfare can afford not to read this book."—Bruce Bueno de Mesquita, Professor of Politics, NYU