When John Nash won the Nobel prize in economics in 1994, many people were surprised to learn that he was alive and well. Since then, Sylvia Nasar’s celebrated biography A Beautiful Mind, the basis of a new major motion picture, has revealed the man. The Essential John Nash reveals his work — in his own words. This book presents, for the first time, the full range of Nash’s diverse contributions not only to game theory, for which he received the Nobel, but to pure mathematics — from Riemannian geometry and partial differential equations — in which he commands even greater acclaim among academics. Included are nine of Nash’s most influential papers, most of them written over the decade beginning in 1949.


From 1959 until his astonishing remission three decades later, the man behind the concepts “Nash equilibrium” and “Nash bargaining” — concepts that today pervade not only economics but nuclear strategy and contract talks in major league sports — had lived in the shadow of a condition diagnosed as paranoid schizophrenia. In the introduction to this book, Nasar recounts how Nash had, by the age of thirty, gone from being a wunderkind at Princeton and a rising mathematical star at MIT to the depths of mental illness.


In his preface, Harold Kuhn offers personal insights on his longtime friend and colleague; and in introductions to several of Nash’s papers, he provides scholarly context. In an afterword, Nash describes his current work, and he discusses an error in one of his papers. A photo essay chronicles Nash’s career from his student days in Princeton to the present. Also included are Nash’s Nobel citation and autobiography.

The Essential John Nash makes it plain why one of Nash’s colleagues termed his style of intellectual inquiry as “like lightning striking.” All those inspired by Nash’s dazzling ideas will welcome this unprecedented opportunity to trace these ideas back to the exceptional mind they came from.

Harold W. Kuhn is Professor Emeritus of Mathematics at Princeton University. Winner of the 1980 von Neumann Prize in Theory, he is the editor of several books (all Princeton), including Classics in Game Theory, Linear Inequalities and Related Systems, Contributions to the Theory of Games, I and II, and is the author of Lectures on the Theory of Games (forthcoming, Princeton). Sylvia Nasar tells the story of Nash's life in A Beautiful Mind (Simon & Schuster), which won the National Book Critics Circle Award in 1999 and was a finalist for the Pulitzer Prize. A former economics reporter for the New York Times, she is the John S. and James L. Knight Professor of Journalism at Columbia University. 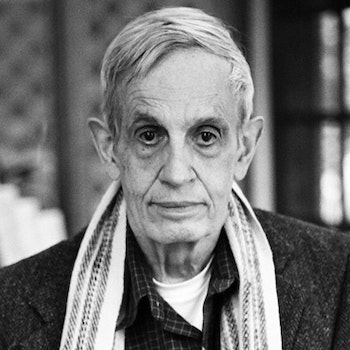 "If you want to see a sugary Hollywood depiction of John Nash's life, go to the cinema. Afterwards, if you are curious about his insights, pick up a new book that explains his work and reprints his most famous papers. It is just as amazing as his personal story."—Chris Giles, Financial Times

"One of the most beautifully designed economics books I have ever seen and at a low price. . . . Why are we so intrigued by the story of John Nash? We are curious to understand a person who proves theorems we are unable to fathom. We imagine the voices from another world he has heard. We ask where he was for 30 years during which he walked among us but wasn't here. We are frightened and we are attracted by this combination of 'crazy' and 'genius', an invitation for visiting the edge of our own minds."—Ariel Rubinstein, The Times Higher Education Supplement

"Any mathematician who read A Beautiful Mind . . . had to be looking for the appendices—the ones explaining what Nash actually did to earn his formidable reputation within the mathematical community. Well, here they are, in a beautifully produced volume. . . . Kuhn, Nasar, and the other contributors have performed a most welcome service by collaborating to bring together the pieces missing from A Beautiful Mind. . . . The mathematical community is eternally in their debt."—SIAM News

"The book is written in a pleasant and informal style, addressed to a large audience."—P.T. Moranu, Mathematica

"John Nash's creative work in game theory has of course had the most profound influence on both its mathematics and its practical applications in economics. It is very good to see his work in this area joined with his other mathematical contributions in a single volume, to give a more rounded perspective."—Kenneth J. Arrow, 1972 Nobel Laureate in Economics

"These papers are among the most important original contributions to mathematics of the twentieth century. They have been extremely influential and their influence continues to grow."—Joseph J. Kohn, Princeton University

"John Nash has attracted enormous popular interest over the past few years. In many ways, the notion of equilibrium in game theory that bears his name is the central concept in game theory, which has led to a revolution in the field of economics. This book, by bringing together Nash's work in game theory and in mathematics, will allow readers to appreciate the scope of his work."—David M. Kreps, Stanford Business School