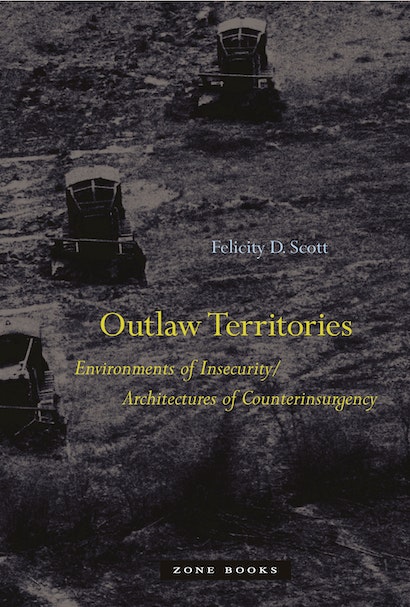 Outlaw Territories: Environments of Insecurity/Architectures of Counterinsurgency traces the relations of architecture and urbanism to forms of human unsettlement and territorial insecurity during the 1960s and ’70s. Investigating a set of responses to the growing urban unrest in the developed and developing worlds, Outlaw Territories revisits an era when the discipline of architecture staked out a role in global environmental governance and the biopolitical management of populations. Felicity D. Scott demonstrates how architecture engaged the displacement of persons brought on by migration, urbanization, environmental catastrophe, and warfare, and at the same time how it responded to the material, environmental, psychological, and geopolitical transformations brought on by postindustrial technologies and neoliberal capitalism after World War II.

At the height of the US–led war in Vietnam and Cambodia, and ongoing decolonization struggles in many parts of the world, architecture not only emerged as a target of political agitation on account of its inherent normativity but also became heavily imbricated within military, legal, and humanitarian apparatuses, and scientific and technological research dedicated to questions of international management and security.

Once architecture became aligned with a global matrix of forces concerned with the environment, economic development, migration, genocide, and war, its conventional role did not remain unchallenged but shifted at times toward providing strategic expertise for institutions responding to transformations born of neoliberal capitalism. Outlaw Territories interrogates this nexus, and questions how and to what ends architecture and the environment came to be intimately connected to the expanded exercise of power within shifting geopolitical frameworks of this time.

“Outlaw Territories mines architectural history to generate a new sensibility and inaugurate a necessary field of practice that might be called ‘the architecture of the earth.’ Felicity Scott redefines architecture’s task as the entanglement of politics and the environment on multiple scales: from ecological experimentation on the scale of buildings, she moves on to discuss the apartheid urbanisms of segregated cities; the ‘human dumping grounds’ of extra­territorial zones; the ‘outlawed frontiers’ of deserts, oceans, and forests before helping us think architecture at the scale of the earth which alternately appears as a battle-zone, a construction site, and a ruin. This book is a major contribution by one of the most creative, lucid, and influential of today’s architectural scholars.” — Eyal Weizman, Professor of Spatial and Visual Culture, Goldsmiths College, University of London, and author of Forensic Architecture and The Least of All Possible Evils

“In Scott’s critically game-changing study, securitas — a great political philology of the times that denotes the risk society as well as societies of care, of sovereign borders, of surveillant skies, and of fortress architecture — is posed against outlaw territories and countercultural settlement movements in the wake of the Cold War. Scott gives us a way to think the politics of architecture as a new environmentality. Essential reading for anyone with activist stakes in the contemporary history of insurgent habitats and militarized space.” — Emily Apter, Professor of French and Comparative Literature, New York University, and author of Against World Literature: On the Politics of Untranslatability

“Like an antidote to amnesia, Scott’s meticulous, granular research vividly recreates the political weather of the 1970s. Here is a sidelined architecture history that returns as a missing link — eccentric stories in the emerging development of those networks, technologies, media, and advocacies of global governance that are of most consequence today. The episodes in Outlaw Territories, laced with issues of militarism, security, and environment, are rehearsals for urgent spatial activism in the present.” — Keller Easterling, Professor, Yale University, and author of Extrastatecraft: The Power of Infrastructure Space