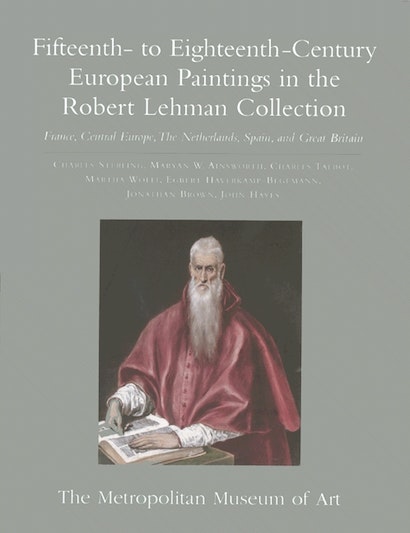 In this volume, forty-two remarkable paintings collected by Robert Lehman and his father, Philip Lehman, are discussed at length in light of recent technical and art historical research. This is the eighth in a projected series of sixteen volumes that will catalogue the entire Robert Lehman Collection at the Metropolitan Museum.


Among the works catalogued here are Petrus Christus’s Goldsmith in His Shop of 1449, which is justly famous as one of the first northern European paintings to depict everyday life, and Hans Memling’s Portrait of a Young Man (ca. 1475-80), in which the sitter is posed before a landscape, a formula that had lasting repercussions in Italian as well as Northern art. Also included is Memling’s Annunciation, one of his finest and most original works. Well-known paintings by Simon Marmion, Jean Hey, Gerard David, Lucas Cranach the Elder and Younger, Hans Holbein, Gerard Terborch, Pieter de Hooch, Rembrandt, and El Greco all represent in their own way the best of the era and place in which they were created, as do masterful portraits by Francisco de Goya, George Romney, and Sir Henry Raeburn. All the paintings in the Robert Lehman Collection are reproduced in full color, supplemented by numerous comparative duotone illustrations.