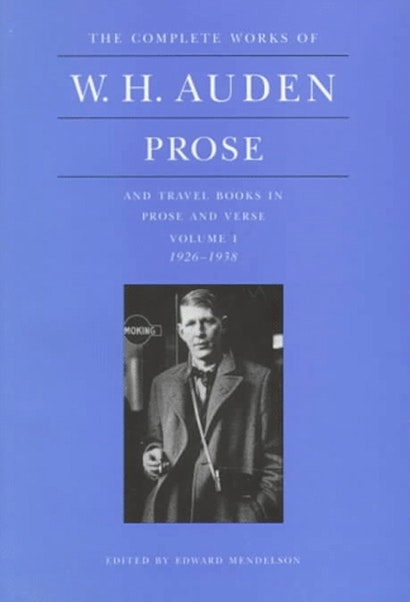 This book contains all the essays and reviews that W. H. Auden wrote during the years when he was living in England, and also includes the full original versions of his two illustrated travel books, Letters from Iceland (written in collaboration with Louis MacNeice) and Journey to a War (written in collaboration with Christopher Isherwood). Auden’s early prose ranges from extravagant indiscreet travel diaries through sharply observed critiques of writers from John Skelton to Winston Churchill. It includes studies of Communism and Christianity; audaciously wide-ranging essays on literature, psychology, and politics; and writings about gossip, sex, prisons, and schools.


The editor’s notes include explanations of contemporary and private allusions. The long “Last Will and Testament” written in verse by Auden and MacNeice, which Evelyn Waugh described as a “gossip column,” is annotated in full. The book will interest not only Auden’s many admirers, but everyone concerned with twentieth-century literature and culture.


In 1928, Stephen Spender hand-printed thirty copies of a small volume of poems by his friend W. H. Auden — the first published book by a man who was to become the dominant literary figure of his generation and one of the century’s greatest poets. Sixty years later, Princeton University Press inaugurated an edition of the complete works of Auden, which is intended to serve as the definitive text for all the works Auden published or intended to publish in the form in which he expected to see them printed: his plays and other drama, libretti, essays and reviews, and poems.

The Complete Works of W. H. Auden will provide a unique opportunity to solve the numerous textual problems connected with the severe revisions Auden made in his own works. The texts are newly edited from Auden’s manuscripts by Edward Mendelson, the literary executor of the Auden estate.

Edward Mendelson is Professor of English and Comparative Literature at Columbia University and the author of Early Auden. He is the editor of the previous volumes in The Complete Works of W. H. Auden: Plays and Other Dramatic Writings, 1928-1938 and Libretti and Other Dramatic Writings, 1939-1973 and of two volumes of Auden's poetry, Collected Poems and The English Auden.

"A rich mine of reading here for scholars and informed lay readers alike."—Library Journal

"Before famously (and more or less permanently) emigrating to New York in 1939, W.H. Auden was not only the foremost English poet of his generation but also a prolific reviewer and essayist whose tastes and political sensibilities dominated the anti-fascist England of the 1930s. . . . this essential volume in a projected complete edition restores the voracious reader and never pedantic critic to the master poet."—Publisher's Weekly

"We need Auden again, sacred and profane. As the New Age lunges into the volcano, we could do worse than read the Auden of the `30s, if only to prepare us to understand, and value, the later Audens . . . The Complete Works, edited with elegant scruple by Auden's literary executor Edward Mendelson is . . . the only way to get at Auden as he happened, year by year, bit by bit, and not as he, or his later biographers, want us to think of him."—Tom D'Evelyn, The Boston Book Review

"For anyone interested in `early Auden' this book is indispensable."—Bernard Knox, The New York Review of Books