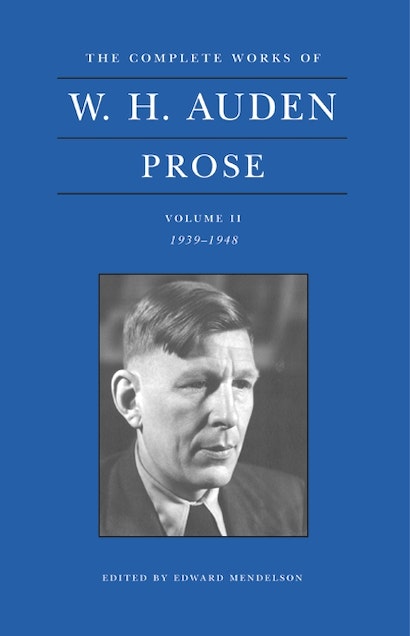 W. H. Auden’s first ten years in the United States were marked by rapid and extensive change in his life and thought. He became an American citizen, fell in love with Chester Kallman, and began to reflect on American culture and to explore the ideas of Reinhold Niebuhr and other Protestant theologians. This volume contains every piece of prose that Auden wrote during these years, including essays and reviews he published under pseudonyms. Most have never been reprinted in any form since their initial publication in such magazines and newspapers as the Nation, the New Republic, Common Sense, Vogue, and the New York Times.


Auden’s prose during this period is frequently directly autobiographical even as he comments on literature, psychology, politics, and religion. The writings range from a dialogue about W. B. Yeats through a respectful parody of Gertrude Stein to Jamesian essays on Henry James. They also include lively and often profound responses to ancient and modern history as well as to contemporary issues in politics and religion. Other highlights include writings on opera and poetry as well as reports of Auden’s lectures and the text of an unfinished autobiographical book, The Prolific and the Devourer. Throughout, Edward Mendelson’s extensive and illuminating editor’s notes explain all contemporary and private allusions.


By making available a large cache of important but previously difficult-to-obtain writings on key subjects, this volume will be of obvious appeal to Auden’s legions of admirers. It will also be enjoyed by everyone interested in twentieth-century literature, religion, and culture.

Edward Mendelson is the Literary Executor of the Estate of W. H. Auden and Professor of English and Comparative Literature at Columbia University.

"For anyone interested in 'early Auden' this book is indispensable."—Bernard Knox, New York Review of Books

"We need Auden again, sacred and profane. As the New Age lunges into the volcano, we could do worse than read the Auden of the '30s, if only to prepare us to understand, and value, the later Audens .. . . The Complete Works, edited with elegant scruple by Auden's literary executor Edward Mendelson is . . . the only way to get at Auden as he happened, year by year, bit by bit, and not as he, or his later biographers, want us to think of him."—Tom D'Evelyn, Boston Book Review

"Before famously (and more or less permanently) emigrating to New York in 1939, W. H. Auden was not only the foremost English poet of his generation but also a prolific reviewer and essayist whose tastes and political sensibilities dominated the anti-fascist England of the 1930s. . . . This essential volume in a projected complete edition restores the voracious reader and never pedantic critic to the master poet."—Publisher's Weekly

"The collection, which can be dipped into as well as read as a whole, is a feast of language and insight, and a brilliant, if indirect, cultural history of the World War II period as well as an often prophetic look at our own."—Arthur Kirsch, Washington Post Book World

"To have found and contextualized the material collected in this second volume of Auden's prose is a magnificent achievement, and Edward Mendelson's immaculately handled edition will be a scholarly resource of a permanent kind."—Peter MacDonald, Times Literary Supplement

"At last, we have a big book in which we can step into the quarry of ideas, good and bad, from which [Auden] mined [his] poems. . . . The essays are overwhelming in the number and variety of the subjects addressed, ideas aired, capital letters employed, and systems invented to prove a small point. . . . The essays are also a reminder of how many more places a poet could work out his worries in public fifty years ago. . . . If he sometimes sounds in the forties as if he were speaking to us from a very high soapbox in a very big square, well, listen: we can hear him, still."—Adam Gopnik, The New Yorker

"To read a mere decade's worth of Auden's essays, reviews, articles and miscellaneous musings is to be reminded that the best English poet of the 20th century was one of its brightest commentators. His range of interests was incomparably wide, his manner generally clear and always insightful, his curiosity unflagging."—Glyn Maxwell, The Guardian

"Auden's range of topics is impressively, even dizzyingly broad. . . . Auden did not sacrifice depth; numerous pieces are reflective, analytic, and otherwise carefully developed, and few of the pieces seem dated. . . . Like its predecessors, the book is the model of an intelligently edited compilation."—Choice

"Auden displays the capacious intellect, wide-ranging sympathies, and unfaltering brilliance that make him one of the most admired writers of the 20th century. Mendelson's meticulously edited collection will be a delight for all who relish the work of this massive, mid-century mind."—Virginia Quarterly Review