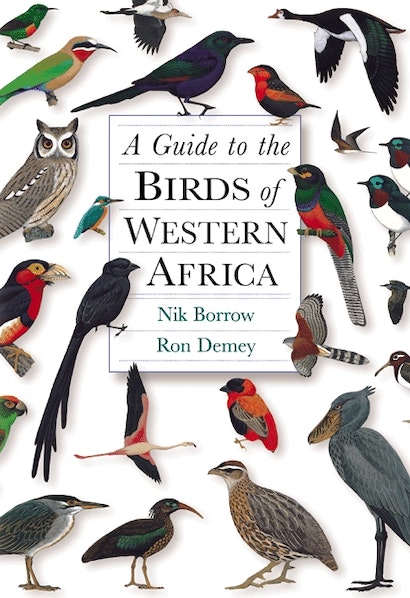 This is a major new guide covering the birds of all western African countries, from Senegal and southern Mauritania east to Chad and the Central African Republic and south to Congo. No other field guide covers this region exclusively and in such comprehensive depth.

A Guide to the Birds of Western Africa describes 1,285 species, representing the entire avifauna of the region. There are 147 original color plates, all painted by the same leading illustrator, comprising over 3,000 figures and depicting almost all the species described. The detailed species accounts cover all identification criteria, including differences between similar species, voice, habits, habitat, breeding, distribution, and status. The text also features color distribution maps for over 1,100 species, and numerous line drawings illustrate particular aspects of behavior and identification.


Both authors have gained extensive field experience over many years in western Africa. Their knowledge and expertise shines through in this outstanding guide to one of the world’s most exciting birding regions.

Nik Borrow is an acclaimed bird artist whose illustrations have appeared in many magazines and journals. He has been a birding tour leader for many years in Africa and elsewhere, and is an original member of the African Bird Club. Ron Demey is a freelance ornithologist who has lived and worked in several West African countries for many years. He has traveled extensively throughout the region. He serves on the editorial team of the African Bird Club and has worked on several African projects for BirdLife International.

"This is surely the definitive handbook and guide to identification of Western Africa's birds, and is highly recommended for everyone from professional ornithologists to birders and armchair naturalists."—Wildlife Activist

"This is now the must-have reference for anyone interested in the birds of western Africa. . . . [It] is indispensable to any bird watcher visiting in the region."—Eirik A. T. Blom, Bird Watcher's Digest

"Invaluable for serious birders and scientists working in or visiting the area. It would also make an excellent addition to a collection of field guides for home or office use."—Condor

"Anyone with an interest in West African birds will want to own this book. We have been waiting for some considerable time for someone to produce a modern guide to West African birds, so Nik Borrow and Ron Demey are to be congratulated for completing the task admirably. . . . [A] splendid achievement."—Stephen Rumsey, British Birds

"This book is a comprehensive and practical guide to all the species of birds occurring in western Africa. It will become the standard identification guide, and will be useful to anyone interested in African wildlife, to biologists, to tourists wanting to know the identity of birds that they have seen in West Africa, and as a general reference to the region's birds."—Robert A. Cheke, author of Sunbirds