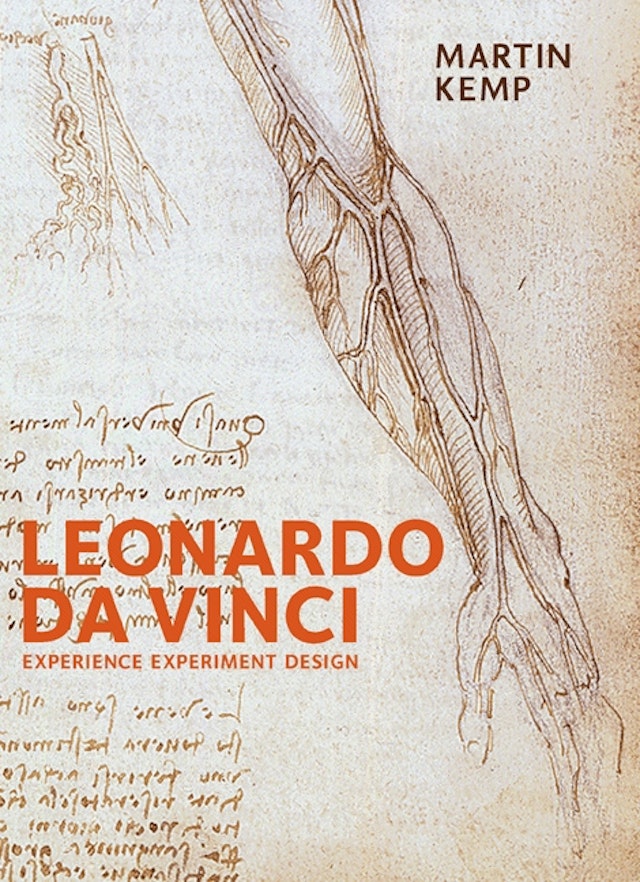 Here, the world’s leading authority on Leonardo da Vinci takes us to the heart of the Renaissance master’s genius — his visual thinking. Probing the mystery of how da Vinci thought graphically, on paper, Martin Kemp traces not only his approach to modeling but also fascinating efforts by modern engineering to build his inventions. Could these inventions have worked? We see da Vinci visualizing mighty ideas from the arts of peace to the science of war — great visions of the earth, the mystery of mathematical proportion in the design of the universe, detailed observations on the motion of waters, and meticulous reconstructions of how heart valves function, as well as his flying machine, tank, and giant crossbow.


No one ever used paper as a laboratory for thinking on the scale of Leonardo da Vinci. No one graced pages with such an impetuous cascade of observations, visualized thoughts, brainstormed alternatives, theories, polemics, and debates concerning virtually every branch of knowledge about the visible world.


This lavishly illustrated and elegantly written book examines 200 extraordinary pages from da Vinci’s notebooks, some virtually unknown, to illuminate the most fundamental aspect of his work.


Published on the occasion of an exhibition at London’s Victoria and Albert Museum, Leonardo da Vinci: Experience, Experiment, and Design provides unrivaled insight into the workings of the artist’s visual mind. Leonardo da Vinci never lost his sense of awe over the wonders of natural design. With this book, we can experience a comparable sense of awe when faced with the enduring grandeur and freshness of his vision.

Martin Kemp is Professor of the History of Art at the University of Oxford. His numerous books include the biography Leonardo and The Oxford History of Western Art, and he is the originator of the Universal Leonardo project, which is generating exhibitions and events across Europe in 2006.

"Leonardo is a glimpse into the mind of an almost mythical genius. Kemp offers us a way of considering how artists and scientists have intuited visual truths in the past, reminds us that the past and the present are connected, and warns us against the potential tyranny of the newest digitized images that, though often beautiful and beguiling, are still man-made and not infallible."—Bettyann Holtzmann Kevles, Scientific American

"A landmark in Leonardo scholarship. To leaf through it is to succumb gradually to deepening degrees of astonishment."—Sebastian Smee, The Australian

"Leonardo da Vinci: Experience, Experiment, Design by Martin Kemp . . . explores the boundary between art and science. . . . Kemp, a leading scholar, analyzes how the artist thought on paper, arguing that the drawings reveal how his mind worked. The book gives an infinitely . . . convincing account of Leonardo's secrets."—Martin Gayford, Bloomberg.com

"A handsome and fascinating book. . . . Here, Martin Kemp, the world's leading authority on Leonardo, reveals the intimate relationship between art and science that was at the core of the master's genius."—Sasha Roeder Mah, Edmonton Journal

"A strong addition to any collection and a proper tribute to one of history's most visually inventive minds. . . . Highly recommended."—Choice

"Kemp orders Leonardo's thoughts in a way that, plausibly, Leonardo himself would have favored, had the artist ever settled for one way to organize them. In fact, it is thanks to Kemp's discerning mind and scholarly ingenuity that Leonardo's thoughts reach the general public with the order, clarity, and coherency that has always eluded them."—Francesca Fiorani, Renaissance Quarterly

"A renowned Leonardo authority, Kemp expands on his familiar theses about the artist's preference for experience over theory and his conviction that function determines form. Kemp's deciphering of Leonardo's infamous backward script leads to fascinating conclusions."—Victor Swoboda, Montreal Gazette

"This book-by the leading Leonardo scholar of this generation, one whose own intellectual range comes closest to matching that of the Renaissance master himself-offers a genuinely new take on Leonardo da Vinci. Its text provides the great pleasure of simultaneously comprising close readings of the drawings themselves and a major, unified thesis regarding the artist's methods and modes of drawing and thinking."—David Rosand, Columbia University

"No one is in a better position to offer such a synthetic understanding of Leonardo's work than Martin Kemp. His enthusiasm for the artist's graphic inventions and his thinking process leaps off practically every page of this book."—Claire Farago, University of Colorado, Boulder

"In the massive and ever-growing library of Leonardo studies, Martin Kemp's meditations on the artist's habits of mind have long stood out. The present catalogue reflects decades of work on the themes and ideas that preoccupied Leonardo as a thinker and as a draftsman. Anyone interested in the historical relationship between art and science should enjoy this book."—Michael W. Cole, University of Pennsylvania