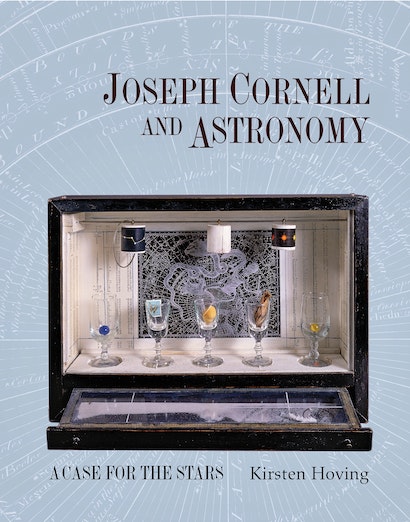 Joseph Cornell and Astronomy provides an in-depth look at one artist’s intense fascination with the science of astronomy. Joseph Cornell (1903-72) has often been viewed as a recluse, isolated in his home on Utopia Parkway, lost in the fairy tales and charming objects of his collages and assemblage boxes. Less commonly known has been Cornell’s vested and serious interest in the history of astronomy and the cutting-edge discoveries made during his own lifetime. An avid reader, he amassed a library of books and articles about science and astronomy, and his reflections about these subjects had a direct impact on his art.


This book explores why astronomy captivated Cornell, and considers hundreds of his works — found-footage films, three-dimensional space-object boxes, enigmatic collages, and cosmic ephemera — that contain references to astronomical phenomena. Kirsten Hoving considers Cornell’s enormous collection of astronomy materials, ranging from eighteenth-century books to recent works; newspaper and magazine articles that Cornell clipped and sorted; and diary entries of his observations while stargazing in his backyard. She examines how Cornell explored many dimensions of astronomy through his identities as a Christian Scientist and surrealist artist.


Unfolding Cornell’s work with depth and breadth, Joseph Cornell and Astronomy offers a convincing and original appreciation of this intriguing American artist.

Kirsten Hoving is the Charles A. Dana Professor of the History of Art and Architecture at Middlebury College. She is the author of Fables in Frames: La Fontaine and Visual Culture in Nineteenth-Century France.

"Figures are plentiful, and reproductions of Cornell's work are crisp and colorful; combined with Hoving's deep research and enthusiasm, this a surprisingly lively read, full of insight into Cornell as well as the intersection of art and science."—Publishers Weekly

"Mesmerizing. . . . Hoving does something ambitious and difficult: she identifies one important thread of his creative process and uses it to help us understand Cornell's art. . . . With its high-quality production and beautiful and wide-ranging illustrations, this book is extremely absorbing."—Pedro Ferreira, Nature

"In this impeccably researched and lucidly written book, Hoving adds to the growing new scholarship that rejects stereotypes of a 'childlike' Cornell, instead revealing an artist engaged with the world. Hoving traces the sources of myriad images and ideas that fueled the artist's lifelong fascination with all things celestial. . . . Her book's analytical strengths are based on extensive research in the Cornell archives and a keen eye for telling details. Cornell emerges as a man of his times, one for whom art and science enriched one another."—E. Housefield, Choice

"[T]his book will significantly change the way Cornell's works are examined—depicting him as a scientist as much as a dreamer—and is a welcome addition to the ever-expanding literature on the artist."—James Boaden, Burlington Magazine

"Joseph Cornell and Astronomy makes a compelling case for Cornell's engagement far outside of parochial concerns by demonstrating his lifelong interest in and serious study of astronomy. . . . Kirsten Hoving has provided a clear and thorough discussion of one important aspect of his work."—R.K. Dickson, Bloomsbury Review

"Kirsten Hoving has achieved a high point in scholarship about this elusive but influential figure in American Art. This is a beautifully written and persuasively argued book, one that contributes decisively to Cornell studies and speaks directly to the shared creative aspects of scientific and artistic pursuits."—Stephanie L. Taylor, Journal for the History of Astronomy

"Kirsten Hoving's Joseph Cornell and Astronomy illuminates the art of Cornell in a remarkable new way. Combining her long-term grounding in Cornell's art and archives with her thorough knowledge of the popular astronomy that fascinated the artist, Hoving produces highly insightful readings of his works that ring true. Hoving's book is a major step in the process of recovering the popular science that surrounded twentieth-century artists and has been missing from the history of art for far too long. Her beautifully written and convincingly argued book will serve as an example for others to follow."—Linda Dalrymple Henderson, University of Texas, Austin

"Although Cornell's art involving celestial motifs is known among art historians and critics, such work has received little critical attention. Hoving succeeds in tying Cornell's celestial work to specific astronomical and astrological concepts, and she unfolds for us the meanings of his boxes and collages. Hoving has impressively filled an important gap in Cornell scholarship."—Dickran Tashjian, author of A Boatload of Madmen: Surrealism and the American Avant-Garde, 1920-1950

"Joseph Cornell and Astronomy is an elegantly written book about Cornell's lifelong obsession with all things celestial. Scrupulously researched, Hoving's book places Cornell and his work at the intersection of some of the most exciting events of the twentieth century. By doing so, she casts a fresh eye on the work of this artist."—Stephanie L. Taylor, New Mexico State University