An essential biography of one of the Bible's most influential books 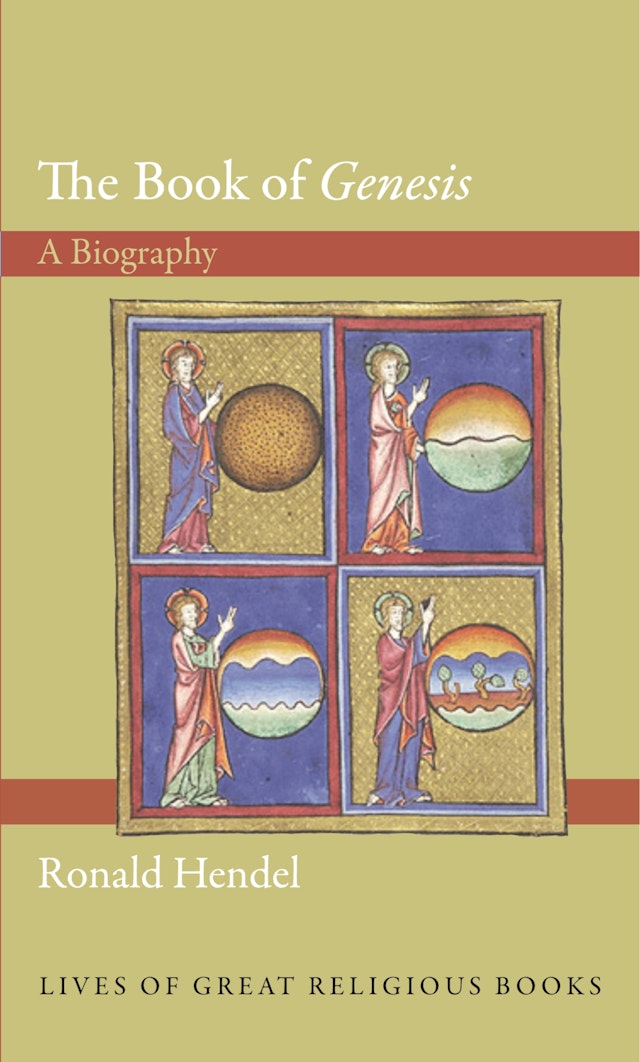 During its 2,500-year life, the book of Genesis has been the keystone to almost every important claim about reality, humanity, and God in Judaism and Christianity. And it continues to play a central role in debates about science, politics, and human rights. With clarity and skill, acclaimed biblical scholar Ronald Hendel provides a panoramic history of this iconic book, exploring its impact on Western religion, philosophy, science, politics, literature, and more.

Hendel traces how Genesis has shaped views of reality, and how changing views of reality have shaped interpretations of Genesis. Literal and figurative readings have long competed with each other. Hendel tells how Luther’s criticisms of traditional figurative accounts of Genesis undermined the Catholic Church; how Galileo made the radical argument that the cosmology of Genesis wasn’t scientific evidence; and how Spinoza made the equally radical argument that the scientific method should be applied to Genesis itself. Indeed, Hendel shows how many high points of Western thought and art have taken the form of encounters with Genesis — from Paul and Augustine to Darwin, Emily Dickinson, and Kafka.

From debates about slavery, gender, and sexuality to the struggles over creationism and evolution, Genesis has shaped our world and continues to do so today. This wide-ranging account tells the remarkable story of the life of Genesis like no other book.

Ronald Hendel is the Norma and Sam Dabby Professor of Hebrew Bible and Jewish Studies at the University of California, Berkeley. He is the editor in chief of The Oxford Hebrew Bible and the author of Remembering Abraham and Reading Genesis.

"Hendel's engaging and accessible biography reminds us that Genesis remains 'an astonishing book of marvelous realism and the root from which we came.'"—Christopher McConnell, Booklist

"Hendel does cover the story of Genesis's ancient foundations and original sense, but rightly devotes most of the book to detailing how it became so freighted with often contradictory meanings over time. His essential conclusion is that the ways in which Western culture has understood Genesis—as a literal account of events, as a figurative depiction of divine action, as a collection of folktales and tribal origin stories—'tend to correlate with the ways that people have understood reality.'"—Brian Bethune, Maclean's Magazine

"Hendel is telling the story of Genesis—not retelling stories from it. . . . [Hendel] takes things in an intriguing direction. If Genesis is the product of various strands of cultural DNA (spliced together long ago by scribes who believed the literal truth of the material they were helping to transmit, while also needing to reconcile elements that didn't quite fit together) then the book's subsequent history is, in a way, encoded in its genome. . . . [A] revelation in its own right."—Scott McLemee, Inside Higher Ed

"If any book deserves to have a biography written about it, it is the opening to the Bible."—Economist

"The biography of Genesis turns out largely to be a history of how it has been read, and Ronald Hendel's book has much to offer people interested in history, literature and philosophy, as well as religion."—Owen Richardson, The Age

"The Book of Genesis portrays the evolving relationship between a book and readers who pursue plain and imaginative understandings, contest truth claims before science, and read contemporary realities into ancient texts. . . . Brilliant and informative . . . this volume makes a case that streamlines but does not oversimplify. . . . [A]ttractive."—Choice

"This series contains the latest scholarship about a specific subject, gives great opportunity for acquiring a limited but significant amount of knowledge, and enthuses readers to go into it in much more detail. This possibility is enhanced by the presence in the Dead Sea Scrolls volume of suggestions for further reading at the end of each chapter."—Charles H. Middleburgh, Charles Middleburgh blog

"In Ronald Hendel's erudite, well-written and surprisingly sparse and entertaining The Book of Genesis: A Biography, the Bible—the Book—is treated as a written document that is living and thriving across the ages. It is essentially as its name implies the quintessential prototype of a book, and whether we take it as the Word of God, whether we agree with its ideas or not, whether we take it literally or figuratively does not diminish its importance for Western literature and civilization."—Arash's World

"This wide-ranging account tells the remarkable story of the life of Genesis like no other book."—World Book Industry

"[T]he book will appeal to those with either a detailed or very sparse knowledge of the history of a text that clearly holds an unending fascination in every age."—Martin O'Kane, Relegre-Studies in Religion and Reception

"Hendel proves himself a very skillful and competent biographer. His book is recommended to all those who would like to strike up an acquaintance with Genesis in its austere beauty and intriguing complexity. . . . The Book of Genesis: a Biography is an interesting and important work on Genesis."—Krzysztof Napora, Biblical Annals

"A delightful read that both informs and engages the reader through its fascinating retelling of selected aspects of the history of interpretation of Genesis, from the beginning up to the modern period."—Richard Middleton, Perspectives on Science and Christian Faith

"This is an illuminating account, broad in historical scope and rich in interdisciplinary perspective, of the varied life that the book of Genesis has lived through almost three millennia. The writing is lucid and engaging, and the story of the multifarious receptions of this seminal text is deeply instructive."—Robert Alter, author of The Art of Biblical Narrative and The Art of Biblical Poetry

"The book of Genesis has had one of the most intriguingly complex lives of all biblical texts. Superbly interweaving many different readings of Genesis, from the allegorical and scientific to the historical and literary, Ronald Hendel covers diverse moments of reception, such as Galileo's writings, Darwin's theory of evolution, the American Civil War, and Kafka's parables. Each chapter is a gem in its own right—and together they create a spellbinding narrative."—Ilana Pardes, author of Melville's Bibles

"Ron Hendel moves easily from classic scholarship on the life that Genesis lived in its biblical birth family to his personal favorites among the biblical book's innumerable afterlives: Rashi and Luther, of course, but also Rabelais, Kafka, and Naguib Mahfouz—a lively lot of lives, in short, with something for everyone."—Jack Miles, author of God: A Biography

"This brilliant book is not only about Genesis but also the history of biblical interpretation. It is extremely learned, but it wears its learning lightly. This is great stuff, and there is nothing else like it."—John J. Collins, Yale Divinity School

"This is a wonderful book. Hendel displays his gifts as a teacher, writing in a tone that readers will find accessible and entertaining."—David Carr, Union Theological Seminary