A sweeping reconsideration of Gauguin 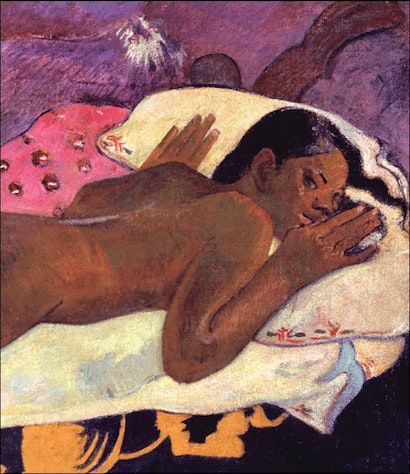 This major reevaluation of Paul Gauguin presents the artist and his work in an entirely new light. The vivid, unnaturalistic colors and bold outlines of Gauguin’s paintings and the strong, semiabstract quality of his woodcuts had a profound effect on the development of twentieth-century art. Here readers will discover why Gauguin was one of the most important artists behind European modernism—yet one who also challenged its very tenets. Because while modern art largely rejected narrative, for Gauguin it remained central.

Gauguin is the first book to fully examine his use of stories and myth to give powerful narrative tension to his paintings at a time when other painters thought storytelling was dead. Gauguin’s life in French Polynesia is often portrayed as a quest for the other, with the artist as the romantic explorer encountering primitive cultures for the first time. In fact, he was deeply immersed in world art and a great reader of Polynesian stories and myths. This book cuts through the mystique surrounding Gauguin—one the artist himself cultivated—to show how he self-mythologized, presenting himself to the world as a suffering, Christ-like figure.

Belinda Thomson is an independent scholar and honorary fellow at the University of Edinburgh. Her books include Van Gogh Paintings: The Masterpieces. Tamar Garb is the Durning Lawrence Professor in the History of Art at University College London. Charles Forsdick is the James Barrow Professor of French at the University of Liverpool. Vincent Gille works at the Pavillon des Arts in Paris. Linda Goddard is lecturer in art history at the University of St. Andrews. Philippe Dagen teaches contemporary art at the Sorbonne and is a critic for Le Monde.

"This handsome volume is a good primer on what, exactly, French artist Paul Gauguin (1848-1903) was up to when he permanently ditched Paris for Tahiti and the Marquesas in 1895. It's a catalog for an exhibit of 155 pieces organized by London's Tate Modern, coming to the National Gallery in Washington, D.C., in February, and it gives as much attention to Gauguin's sculpture as to his paintings. The accompanying essays illuminate the contradictions of a man who styled himself as a 'primitive' but relied on the efficiencies of the French colonial postal service to get his work back to potential buyers in Paris on a regular basis. An excellent piece by Charles Forsdick explains the crucial role French doctor Victor Segalen played in rescuing Gauguin's last works after his death."—Michael Upchurch, Seattle Times

"A spectacular picture book. Even reproduced, Gauguin's vibrant post-Impressionist palette delights with unexpected harmonies. This exhibition catalogue offers 250 reproductions from a wonderful show at London's Tate Gallery. It's the complete Gauguin shebang—his Tahitian girls, his stilllifes and their avant-garde experiments with perspective, his French country scenes, his carved-wood statues and bas-reliefs, even his ghoulish self-portrait as a stoneware mug. Scholarly essays examine how Gauguin promoted his larger-than-life image of the artist as superior to spiritually bereft Europeans."—Victor Swoboda, Montreal Gazette

"This beautiful publication accompanies the current Tate Modern exhibition which is also scheduled for the National Gallery of Art in Washington DC. The book is stunningly illustrated with more than 200 full color reproductions of paintings, works on paper, ceramics, woodcarvings, writings, sourcebooks, journals, letters, and personal effects. While Gauguin's paintings are frequently reproduced, often in larger formats, Gauguin: Maker of Myth is unusual in its inclusion of sourcebook material, not all of which is included in the exhibition itself. Readers looking only for coffee-table-sized reproductions of Gauguin's more famous works should look elsewhere. This book speaks more directly to artists, teachers, and students who are seeking insight into Gauguin's process of developing a body of work and identity as an artist. Images of cups, wood carvings, and other oddments that this book includes are difficult to find in other publications. Gauguin: Maker of Myth unfolds a wonderful body of works and research for artists, historians, and art lovers. The book is beautifully designed and liberally illustrated with an attention that assists the reader in moving swiftly though a dense and plentiful history spanning several art movements."—Pamela Ayres, ForeWord Reviews

"These essays break new ground and exemplify a very high order of rigor and creativity. Gauguin repositions the artist as a canny and deliberate agent of his own reputation and eventual mythos. The Gauguin who emerges here is not merely the familiar consummate European male avatar of a primitivizing optic and the colonial gaze. This Gauguin is a reader and thinker."—Hollis Clayson, Northwestern University