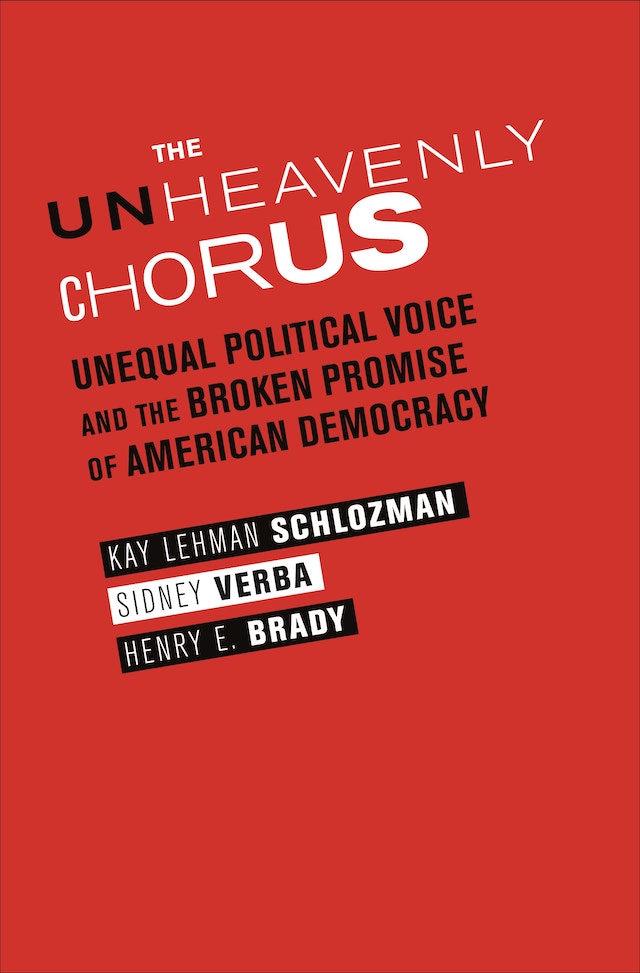 Politically active individuals and organizations make huge investments of time, energy, and money to influence everything from election outcomes to congressional subcommittee hearings to local school politics, while other groups and individual citizens seem woefully underrepresented in our political system. The Unheavenly Chorus is the most comprehensive and systematic examination of political voice in America ever undertaken — and its findings are sobering.

The Unheavenly Chorus is the first book to look at the political participation of individual citizens alongside the political advocacy of thousands of organized interests — membership associations such as unions, professional associations, trade associations, and citizens groups, as well as organizations like corporations, hospitals, and universities. Drawing on numerous in-depth surveys of members of the public as well as the largest database of interest organizations ever created — representing more than thirty-five thousand organizations over a twenty-five-year period — this book conclusively demonstrates that American democracy is marred by deeply ingrained and persistent class-based political inequality. The well educated and affluent are active in many ways to make their voices heard, while the less advantaged are not. This book reveals how the political voices of organized interests are even less representative than those of individuals, how political advantage is handed down across generations, how recruitment to political activity perpetuates and exaggerates existing biases, how political voice on the Internet replicates these inequalities — and more.

In a true democracy, the preferences and needs of all citizens deserve equal consideration. Yet equal consideration is only possible with equal citizen voice. The Unheavenly Chorus reveals how far we really are from the democratic ideal and how hard it would be to attain it.

"Kay Lehman Schlozman, Sidney Verba, and Henry E. Brady are the nation's leading analysts of participatory inequality, and The Unheavenly Chorus is their magnum opus—a wide-ranging, heavily statistical analysis of how Americans try to make themselves heard as individuals and through organizations of different kinds."—Paul Starr, New Republic

"In The Unheavenly Chorus, [the authors] present a timely and wide-ranging analysis that catalogs and describes the nature and magnitude of political inequality in the United States. . . . These esteemed authors, who have devoted their careers to the study of political participation, have assembled in 718 pages the most complete compendium of political inequality we have—its definition, sources, magnitude, and consequences—together with a consideration of changes in participatory processes that might alleviate inequalities in political voice. In the end, it is a troubling story about the state of American democracy."—Andrea Louise Campbell, Harvard Magazine

"In The Unheavenly Chorus, the authors take direct aim at how economic inequality contributes to inequality in citizen involvement in politics. Over the course of 600 pages, they assiduously document that politics in America is a sport played mostly by members of the upper and upper-middle classes."—Nolan McCarty, American Interest

"The Unheavenly Chorus is classic Schlozman, Verba, and Brady: a timely, deeply researched examination of participatory inequalities in American civic life. Ranging broadly from interest groups to voting to protests and social movements, the authors use their combined decades of research and reflection to paint a powerful and revealing picture of the landscape of citizen involvement in politics—and the stark tilt of that landscape toward those at the top of the economic ladder. Essential reading."—Jacob S. Hacker, coauthor of Winner-Take-All Politics: How Washington Made the Rich Richer—and Turned Its Back on the Middle Class

"The Unheavenly Chorus is the definitive study of participatory inequality in America. Marshaling prodigious evidence, the authors show how money not only buys influence directly but also affects associations that are supposed to be democratic antidotes to concentrated wealth. A monumental achievement of careful scholarship, this book offers real knowledge of how politics actually operates."—Robert Kuttner, coeditor, The American Prospect

"Here, finally, is the analysis we've been waiting for. With extraordinary rigor and utmost care, three of the nation's most eminent political scientists show beyond a doubt how participation in American politics is inextricably linked to income and education. The most affluent and best-educated citizens are consistently overrepresented, which threatens the core democratic principle of equal responsiveness to all. This is a masterful work, certain to be a classic."—Robert Reich, University of California, Berkeley

"This book is one of a kind. It represents a major statement about the current state of American democracy, political participation, social class, and social inequality. The Unheavenly Chorus gives overwhelming evidence that something is wrong with our political system and needs to be fixed. I believe this is one of the most important books of the decade."—Frank R. Baumgartner, coauthor of Agendas and Instability in American Politics

"What the authors have done here is to write a book about both majoritarian and pluralist democracy—and the shortcomings of each. They forcefully convey that our democracy is ill and that the statistics they've assembled are not abstractions but represent inequality of opportunity in everyday life. In its own dignified and scholarly way, The Unheavenly Chorus voices outrage."—Jeffrey M. Berry, coeditor of The Oxford Handbook of American Political Parties and Interest Groups

"The Unheavenly Chorus is a tour de force. It attacks a timely yet timeless set of issues that are critical to understanding the extent of—and possibilities for—democratic governance and political equality. Instead of a heavenly chorus, the authors find a cacophony of deep, enduring, and cumulative inequalities of political voice."—Dara Z. Strolovitch, author of Affirmative Advocacy: Race, Class, and Gender in Interest Group Politics