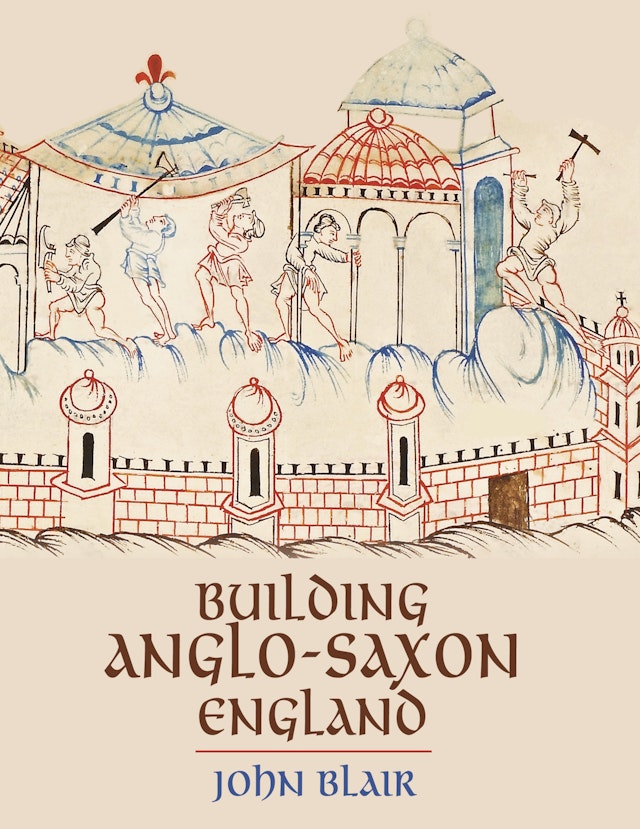 This beautifully illustrated book draws on the latest archaeological discoveries to present a radical reappraisal of the Anglo-Saxon built environment and its inhabitants. John Blair, one of the world’s leading experts on this transformative era in England’s early history, explains the origins of towns, manor houses, and castles in a completely new way, and sheds new light on the important functions of buildings and settlements in shaping people’s lives during the age of the Venerable Bede and King Alfred.

Building Anglo-Saxon England demonstrates how hundreds of recent excavations enable us to grasp for the first time how regionally diverse the built environment of the Anglo-Saxons truly was. Blair identifies a zone of eastern England with access to the North Sea whose economy, prosperity, and timber buildings had more in common with the Low Countries and Scandinavia than the rest of England. The origins of villages and their field systems emerge with a new clarity, as does the royal administrative organization of the kingdom of Mercia, which dominated central England for two centuries.

Featuring a wealth of color illustrations throughout, Building Anglo-Saxon England explores how the natural landscape was modified to accommodate human activity, and how many settlements — secular and religious—were laid out with geometrical precision by specialist surveyors. The book also shows how the Anglo-Saxon love of elegant and intricate decoration is reflected in the construction of the living environment, which in some ways was more sophisticated than it would become after the Norman Conquest.

John Blair is Professor of Medieval History and Archaeology at the University of Oxford and Fellow in History at The Queen's College. His books include The Church in Anglo-Saxon Society and The Anglo-Saxon Age: A Very Short Introduction.

"T]here appears to be some basis for the theory of a freer Saxon England, and if the period is of deeper interest to you, then you’ll well be rewarded by this book."—Stewart Rayment, interLib

"The most stimulating book I’ve read this year has been John Blair’s Building Anglo-Saxon England. . . . Beautifully written and generously illustrated, this book is essential reading for anyone who wants to understand how the Anglo-Saxons saw and interacted with the places in which they lived."—Eleanor Parker, History Today

"Beautifully presented and richly illustrated, [Building Anglo-Saxon England] takes the reader back to what used to be the Dark Ages. Thanks, in no small part to the work of its author, a distinguished historian, the centuries between about 600 and 1100 are now less dark."—William White, Church Times

"I admired and appreciated John Blair’s Building Anglo-Saxon England, which provides a cutting-edge survey of how England came literally to be built. Beautifully illustrated and possessed of a panoramic sweep, it integrates archaeology, topography and textual studies to ground-breaking effect."—Tom Holland, History Today

"A welcome change to some more traditional history books that focus on the information gleaned from the written word, this work takes advantage of some of the most recent archaeological discoveries, some of which are from unpublished sources."—Local History Society Newsletter

"John Blair has taken on the monumental task of probing the cultural innovations that helped to shape early medieval buildings and settlement patterns after AD 600 until 1086 and a little beyond. . . history may not change but our perceptions of it can and new evidence is always emerging."—Della Hooke, Medieval Archaeology

"John Blair has a reputation for being one of the most original historians of Anglo-Saxon England, and he amply merits that with this amazing new book. This deft mixture of archaeology, history, and place-name studies shows us how Anglo-Saxon villages worked, in ways that have never been attempted before. Everyone in the future will have to start with this pathbreaking work."—Chris Wickham, author of Medieval Europe

"A magisterial work. Blair provides a compelling, integrated survey of Anglo-Saxon settlement, habitation, architecture, landscape design, and urban design. An impressive book of sweeping coverage, Building Anglo-Saxon England will undoubtedly become the standard work in the field."—Richard Gameson, author of The Role of Art in the Late Anglo-Saxon Church

"A book that will undoubtedly shape approaches to early medieval England for many years to come."—Richard Jones, author of The Medieval Natural World