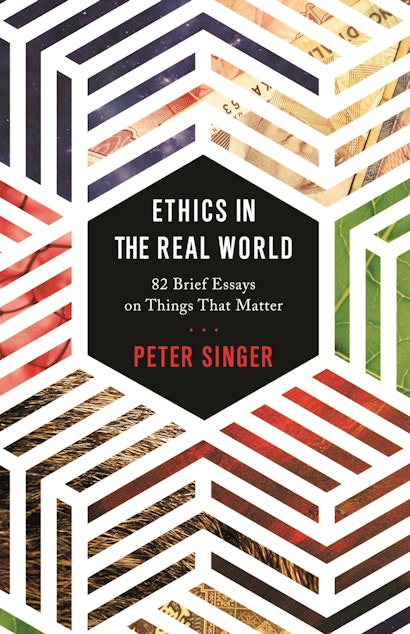 Peter Singer is often described as the world’s most influential philosopher. He is also one of its most controversial. The author of important books such as Animal Liberation, Practical Ethics, Rethinking Life and Death, and The Life You Can Save, he helped launch the animal rights and effective altruism movements and contributed to the development of bioethics. Now, in Ethics in the Real World, Singer shows that he is also a master at dissecting important current events in a few hundred words.

In this book of brief essays, he applies his controversial ways of thinking to issues like climate change, extreme poverty, animals, abortion, euthanasia, human genetic selection, sports doping, the sale of kidneys, the ethics of high-priced art, and ways of increasing happiness. Singer asks whether chimpanzees are people, smoking should be outlawed, or consensual sex between adult siblings should be decriminalized, and he reiterates his case against the idea that all human life is sacred, applying his arguments to some recent cases in the news. In addition, he explores, in an easily accessible form, some of the deepest philosophical questions, such as whether anything really matters and what is the value of the pale blue dot that is our planet. The collection also includes some more personal reflections, like Singer’s thoughts on one of his favorite activities, surfing, and an unusual suggestion for starting a family conversation over a holiday feast.

Provocative and original, these essays will challenge—and possibly change—your beliefs about a wide range of real-world ethical questions.

Peter Singer is the Ira W. DeCamp Professor of Bioethics in the University Center for Human Values at Princeton University and Laureate Professor at the University of Melbourne. He first became well known internationally in 1975 with the publication of Animal Liberation. His other books include How Are We to Live?, The Ethics of What We Eat (with Jim Mason), and The Most Good You Can Do. He divides his time between Princeton and Melbourne.

"[Singer] is persuasive on so many topics that he makes you wish we could turn the world off, then on again, in an attempt to reset it."—Dwight Garner, New York Times

"A terrific recent book . . . that wrestles with how much we should donate to charity, and whether wearing a $10,000 watch is a sign of good taste, or of shallow narcissism."—Nicholas Kristof, New York Times

"An accessible introduction to the work of a philosopher who would not regard being described as ‘accessible' as an insult. . . . Despite their brevity, the essays do not shirk the big moral questions."—The Economist

"Philosophy should be a more public endeavor, and Singer's work is an excellent entry point. In a fall that will be shaped by a political contest in many ways detached from genuinely pressing moral issues, it might also serve as a refreshingly complex source of ethical questioning."—Talya Zax, Forward

"Singer demonstrates how to write pungently and succinctly about moral philosophy."—Daniel Johnson, Standpoint

"The essays in the present volume address issues well beyond Singer's normal range of commentary. In sum, this book not only provides a broad-based introduction to Singer¹s moral philosophy but also will serve . . . as an excellent textbook for any course in applied ethics. For philosophers, Singer's work provides a model for how to transition from the ivory tower to the domain of public philosophy."—Choice

"Singer is a provocative, well-informed and hands-on philosopher, with a lucid and engaging writing style. The collection provides a comprehensive and accessible overview of themes that are central to Singer's ethics. . . . His essays are well-structured, engaging, and exemplarily clear. Moreover, his arguments tend to be nuanced and non-dogmatic, in spite of his well-known ethical agenda: here is an ethicist not looking for arguments to support a preconceived conclusion, but sincerely pondering the implications of his utilitarian stance."—Jeroen Hopster, Erasmus Journal for Philosophy and Economics

"Inspiring and enlivening; each essay is an easily digested nugget of acute, inventive reasoning and moral urgency, focused on practical, achievable results and the resistance of lazy, dogmatic thinking. . . . Any reader will find the book accessible; every reader will find it both thought-provoking and challenging."—Shane N. Glackin, Quarterly Review of Biology

"The way Singer approaches his subject matter is awesome and instructive. He picks up news, anniversaries, but also personal encounters, and—within three or four sentences—shows the deeper ethical questions that lie behind these snippets."—Jan Friedrich, Ethical Theory and Moral Practice

"This is a lovable book which deserves to be read and discussed."—Tommi Lehtonen, European Legacy

"This book of clear analysis and challenging thinking encourages readers towards radical shifts of thinking and action."—David Lorimer, Paradigm Explorer

"Peter Singer is among the most vital moral voices of our time. He urges us to confront not only the question of what we should not do, but also the harder and larger questions of what we should do, and how much we owe to others."—Larissa MacFarquhar, author of Strangers Drowning: Grappling with Impossible Idealism, Drastic Choices, and the Overpowering Urge to Help

"Read this book. Every chapter will make you think. Some hopefully will make you think differently."—Dean Karlan, coauthor of More Than Good Intentions: Improving the Ways the World's Poor Borrow, Save, Farm, Learn, and Stay Healthy

"Peter Singer might well be the most important philosopher alive. He is certainly one of the most enjoyable to read, and it's a joy to browse through this collection of his smart short essays. This is public philosophy at its best—clear, controversial, and deeply rational."—Paul Bloom, author of Just Babies: The Origins of Good and Evil

"Peter Singer has done more good for the world than any other living philosopher, with ideas that have helped fight poverty, transform medical ethics, and protect animals. In this collection of popular essays, his intellect, courage, humanity, good sense, and good humor shine through. This is practical philosophy at its very best, stripped of all pretense and wisely applied to the most important questions of our time."—Joshua Greene, author of Moral Tribes: Emotion, Reason, and the Gap Between Us and Them

"Peter Singer, one of the world's best-known and most significant philosophers, addresses some profoundly important issues in this book. He presents the issues and arguments with a lucidity, accessibility, and sharpness reminiscent of Bertrand Russell, another philosopher who sought to have a serious social impact. Ethics in the Real World will undoubtedly be a force for the good."—Bart Schultz, University of Chicago

"Perhaps more than any modern philosopher, Peter Singer has focused on the question of how to live a better life. If you want a philosophy that can directly alleviate human and animal suffering, read this wonderful book."—Sam Harris, author of the New York Times bestsellers The End of Faith, The Moral Landscape, and Waking Up

“I started reading Ethics in the Real World when I was arrested for blocking the entrances of petrol terminals, as part of a Just Stop Oil protest, and finished it when I was in custody for a protest with the animal rights and climate group, Animal Rebellion. When I am expecting to be arrested after a protest, I bring a book to read while being held in police custody. This made a fantastic custody book!”—Olivier Clegg, activist