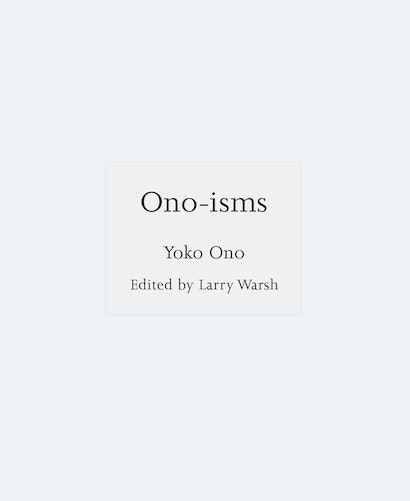 Ono-isms is a collection of provocative and powerful quotations from influential multimedia artist, singer, songwriter, and peace activist Yoko Ono, providing a richer understanding of this important cultural icon. Since emerging on the international art scene in the early 1960s, Ono has made profound contributions to visual and performance art, filmmaking, and experimental music in work that often radically questions the division between art and the everyday. In recent years she has embraced social media to communicate her artistic and activist messages to even broader audiences around the world. Gathered from interviews and other primary sources, this comprehensive and nuanced book sheds new light on a complex and multifaceted artist who has shaped our culture in countless ways.

​​​​​​Yoko Ono’s work has been featured in many solo and group exhibitions, including major retrospectives at the Museum of Modern Art in New York and the Whitney Museum of American Art. Her awards include the Golden Lion for Lifetime Achievement from the Venice Biennale. Larry Warsh has been active in the art world for more than thirty years as a publisher and artist-collaborator. He is the editor of many books, including The Notebooks of Jean-Michel Basquiat, Lennon-isms, Warhol-isms, Basquiat-isms, and Weiwei-isms (all Princeton).