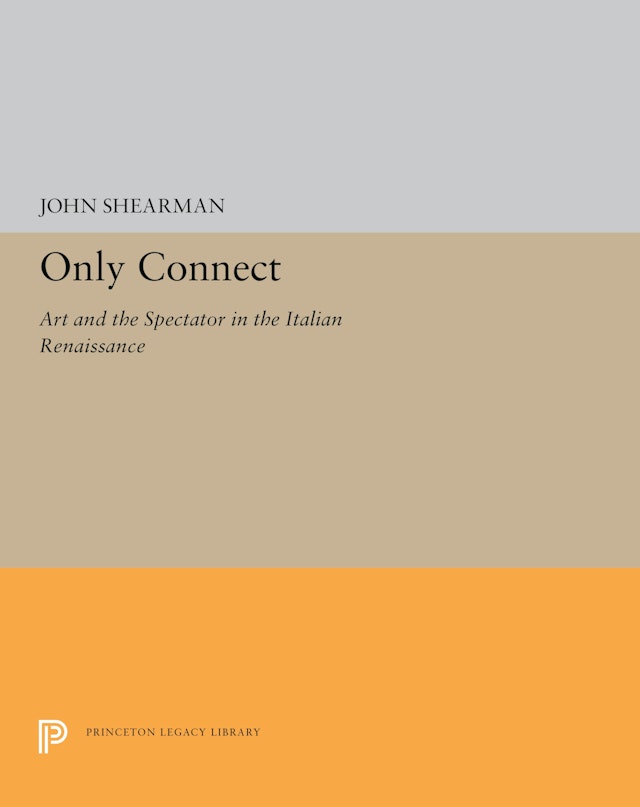 John Shearman makes the plea for a more engaged reading of art works of the Italian Renaissance, one that will recognize the presuppositions of Renaissance artists about their viewers. His book is the first attempt to construct a history of those Renaissance paintings and sculptures that are by design completed outside themselves in or by the spectator, that embrace the spectator into their narrative plot or aesthetic functioning, and that reposition the spectator imaginatively or in time and space. He takes the lead from texts and artists of the period, for these artists reveal themselves as spectators. Among modern historiographical techniques, Reception Theory is closest to the author’s method, but Shearman’s concern is mostly with anterior relationships with the viewer — that is, relationships conceived and constructed as part of the work’s design, making, and positioning.
Shearman proposes unconventional ways in which works of art may be distinguished one from another, and in which spectators may be distinguished, too, and enlarges the accepted field of artistic invention. Furthermore, His argument reflects on the Renaissance itself. What is created in this period tends to be regarded as conventional, or inherent in the nature of painting and sculpture: he maintains that this is a careless, disengaged view that has overlooked the process of discovery by immensely inventive and visually intelllectual artists.
John Shearman is William Door Boardman Professor of Fine Arts at Harvard University. Among his works are Mannerism (Hardmondsworth/Penguin), Raphael’s Cartoons in the Collection of Her Majesty the Queen and the Tapestries for the Sistine Chapel (Phaidon), The Early Italian Paintings in teh Collection of Her Majesty the Queen (Cambridge). and Funzione e Illusione (il Saggiatore).
The A.W. Mellon Lectures in the Fine Arts, 1988
Bollingen Series XXXV: 37