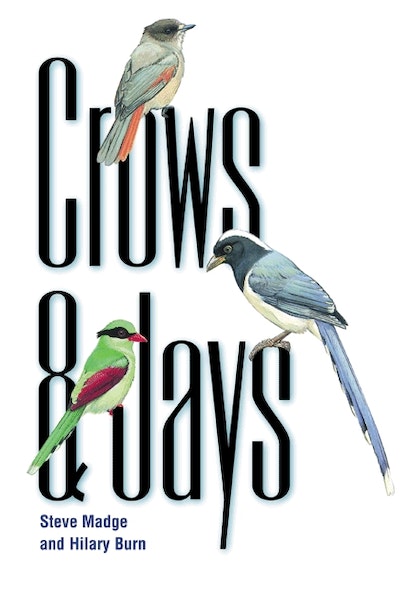 In no other group of perching birds has evolution produced such a degree of variation as in the 120 species of crows and jays that inhabit the world today. They range from the tiny Hume’s Ground-jay of the steppe-highlands of Tibet to the huge Thick-billed Raven of the mountains of Ethiopia. Some are exceedingly beautiful in color, grace, and form; others are sinister in appearance. Some appear in tales of mythology and superstition; others are merely regarded as agricultural pests. The great majority, however, remain largely unknown, coming into contact with humans mainly when their specialized habitats are destroyed. Over 20 species are now regarded as internationally endangered and some may disappear before we have a chance to learn much about them. This guide details all species of corvid, combining Steve Madge’s authoritative text with 30 superb color plates by Hilary Burn.


The text treats each species in depth, summarizing identification techniques and concisely reviewing all aspects of corvid behavior, distribution, population, and taxonomy. The color plates depict all 120 species, with each plate accompanied by an informative caption page containing color world-distribution maps and summaries of the criteria required to identify the species. Some of these, including the Banggar Crow, Mesopotamian Crow, and Flores Crow have never before been illustrated.

Crows and Jays is both a source of scientifically accurate information and a user-friendly identification guide. It seeks to provide everyone, from birdwatchers to biologists, with a greater understanding of the lives of these fascinating yet very complex birds.

Steve Madge has gained first-hand knowledge of most species of corvid during his extensive travels throughout the world and has published widely in journals. His previous book with Hilary Burn, Wildfowl, was voted ''Best Bird Book of the Year'' in 1988 by the journal British Birds. He helped form the company Birdquest and is a former member of the British Birds Rarities Committee. Hilary Burn is recognized as one of the leading bird artists in the world. Her work has appeared in many books, including The Birds of the Western Palearctic, the RSPB Book of British Birds, Wildfowl, and The Handbook of Bird Identification for Europe and the Western Palearctic. She is a member of the Society of Wildlife Artists.

"This guide provides an excellent source of reference . . . and consequently deserves acclaim."—Cotinga

"All serious birders have already made a habit of purchasing the identification guides in this series, and Crows and Jays will not change their minds. All birders who live in or travel to corvid-rich areas and all those who hold a fascination for corvids will want to own this excellent guide."—Birding