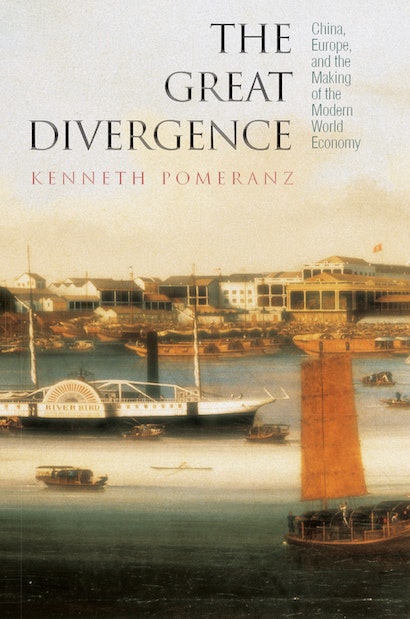 The Great Divergence brings new insight to one of the classic questions of history: Why did sustained industrial growth begin in Northwest Europe, despite surprising similarities between advanced areas of Europe and East Asia? As Ken Pomeranz shows, as recently as 1750, parallels between these two parts of the world were very high in life expectancy, consumption, product and factor markets, and the strategies of households. Perhaps most surprisingly, Pomeranz demonstrates that the Chinese and Japanese cores were no worse off ecologically than Western Europe. Core areas throughout the eighteenth-century Old World faced comparable local shortages of land-intensive products, shortages that were only partly resolved by trade.


Pomeranz argues that Europe’s nineteenth-century divergence from the Old World owes much to the fortunate location of coal, which substituted for timber. This made Europe’s failure to use its land intensively much less of a problem, while allowing growth in energy-intensive industries. Another crucial difference that he notes has to do with trade. Fortuitous global conjunctures made the Americas a greater source of needed primary products for Europe than any Asian periphery. This allowed Northwest Europe to grow dramatically in population, specialize further in manufactures, and remove labor from the land, using increased imports rather than maximizing yields. Together, coal and the New World allowed Europe to grow along resource-intensive, labor-saving paths.


Meanwhile, Asia hit a cul-de-sac. Although the East Asian hinterlands boomed after 1750, both in population and in manufacturing, this growth prevented these peripheral regions from exporting vital resources to the cloth-producing Yangzi Delta. As a result, growth in the core of East Asia’s economy essentially stopped, and what growth did exist was forced along labor-intensive, resource-saving paths — paths Europe could have been forced down, too, had it not been for favorable resource stocks from underground and overseas.

Kenneth Pomeranz is Professor of History at the University of California, Irvine. He is author of The Making of a Hinterland: State, Society, and Economy in Inland North China, 1853-1937, which won the John King Fairbank Prize from the American Historical Association, and coauthor (with Steven Topik) of The World that Trade Created.

"The vast international disparity in incomes and standards of living between Western Europe and its offshoots on the one hand, and most of Asia, Africa, and Latin America on the other, is a striking feature of the modern world. Pomeranz's study is an important addition to the literature that challenges elements of every major interpretation of the European take-off."—Choice

"A profoundly though-provoking book which will change the terms of the debate about the origins of capitalism, the rise of the West and the fall of the East."—Jack Goody, Times Higher Education Supplement

"This book makes, bar none, the biggest and most important contribution to our new understanding of the causes and mechanisms that brought about the great divergence' between the West and the rest of China in particular. . . . An entirely new and refreshing departure. Although he makes new comparisons between Europe, China, Japan, India, Southeast Asia, Pomeranz also connects all these and more in a bold new sweep that should immediately make all previous and most contemporary related work obsolescent."—Andre Gunde Frank, Journal of Asian Studies

"This book is very important and will have to be taken seriously by anyone who thinks that explaining the Industrial Revolution . . . is crucial to our understanding of the modern world. . . . [A] book so rich that fresh insights emerge from virtually every page."—Robert B. Marks, American Historical Review

"Exhaustively researched and brilliantly argued. . . . Suffice it to say that The Great Divergence is undoubtedly one of the most sophisticated and significant pieces of cliometric scholarship to be published of late, especially in the field of world history.""—Edward R. Slack, Jr., Journal of World History

"Pomeranz uses that European invention—economics—to overturn Eurocentrism, establishing beyond cavil a New Fact in our world. Never again will Europeans imagine they stood alone in the doorway of economic growth. Pomeranz and his colleagues in the new sinology have reintroduced the Central Kingdom and its stunning historical sources, and Pomeranz has written the one essential book."—Deirdre McClosky, University of Iowa

"Pomeranz uses a mixture of institutional forces and technological/geological luck to explain how an economic and ecological 'tie game' suddenly became a victory for western Europe over China. He combines global imagination with the scientific detail needed to make his points hold firm. The Great Divergence should command widespread respect."—Peter H. Lindert, University of California, Davis

"A truly magisterial effort based on an immense knowledge of the field, a vast amount of reading, and on close and careful analysis, informed by both social science and history."—Joel Mokyr, Northwestern University

"This is an outstanding book, painstaking and devastating in its attack on received wisdom, supported by a wealth of solid evidence and elegant argument."—Jack A. Goldstone, University of California, Davis