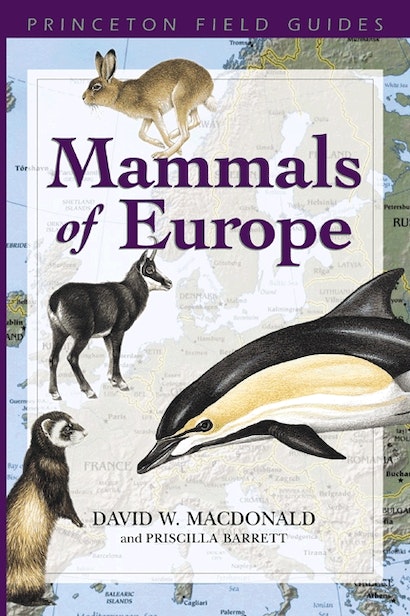 In the wilds of which one continent do Canadian beavers, white-tailed deer, raccoons, American mink, Algerian hedgehogs, Egyptian slit-faced bats, Chinese water deer, golden jackals, red-necked wallabies, and Barbary apes scamper or flutter about? Europe. This guide is the first to authoritatively describe all of the more than 200 mammals one might encounter in the Old World and the seas around it — also including more widespread creatures such as brown bears, badgers, bats, hedgehogs, wild boar, and a host of whales and dolphins.


The book features 64 color plates containing over 600 superbly detailed paintings of the animals themselves, sometimes with their young, and sketches of tracks, nests, holes, field signs, skulls and teeth. Many species appear in their characteristic gaits. The succinct yet unusually informative text is complemented by 236 black and white sketches and over 200 distribution maps. For each species, details on color, form, habitats, measurements, breeding, and behavior are given. A specific entry for every animal covers recognition, whether by sound, the marks left when feeding, or its tracks. A table on bats explains all variations in flight pattern, calls, and feeding times. An exhaustive list of calls made by whales and dolphins is also included.


Nature-lovers eyeing a real or imagined European vacation will discover in these pages that the Old World’s mix of mammals, far from being old hat, is positively fascinating. Offering thorough information and first-rate color illustrations, this book sets the standard high.

David W. Macdonald heads the Ecology and Conservation Biology Group in the Department of Zoology, Oxford University. He is the author of several books, including the hugely successful two-volumeEncyclopedia of Mammals, and of hundreds of scientific papers on animal behavior. Priscilla Barrett was involved with research into animal behavior before devoting herself full time to painting. She is an elected member of the Society of Wildlife Artists in the United Kingdom and has exhibited widely. She has illustrated many books, including field guides to the mammals of Europe, Africa, and South America. She has illustrated four of David Macdonald's previous books.

"A fine book. The illustrations are superb! The text is also a cause for enthusiasm, being much longer and richer than in most field guides, clearly written, and up to date."—Robert S. Hoffmann, Smithsonian Institution