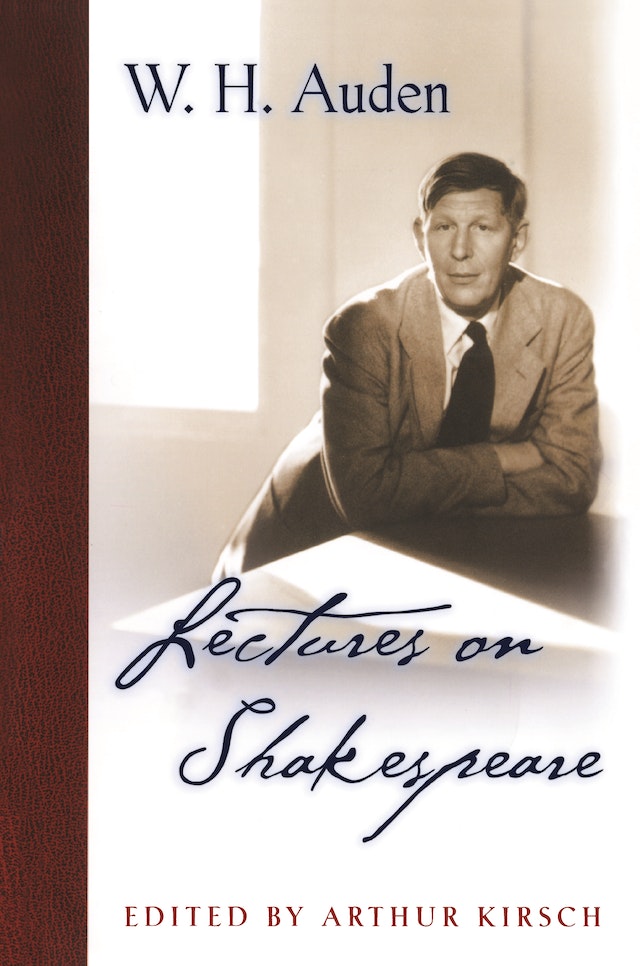 “W. H. Auden, poet and critic, will conduct a course on Shakespeare at the New School for Social Research beginning Wednesday. Mr. Auden has announced that in his course … he proposes to read all Shakespeare’s plays in chronological order.” The New York Times reported this item on September 27, 1946, giving notice of a rare opportunity to hear one of the century’s great poets comment on one of the greatest poets of all time. Published here for the first time, these lectures now make Auden’s thoughts on Shakespeare available widely.


Painstakingly reconstructed by Arthur Kirsch from the notes of students who attended, primarily Alan Ansen, who became Auden’s secretary and friend, the lectures afford remarkable insights into Shakespeare’s plays as well as the sonnets.


A remarkable lecturer, Auden could inspire his listeners to great feats of recall and dictation. Consequently, the poet’s unique voice, often down to the precise details of his phrasing, speaks clearly and eloquently throughout this volume. In these lectures, we hear Auden alluding to authors from Homer, Dante, and St. Augustine to Kierkegaard, Ibsen, and T. S. Eliot, drawing upon the full range of European literature and opera, and referring to the day’s newspapers and magazines, movies and cartoons. The result is an extended instance of the “live conversation” that Auden believed criticism to be. Notably a conversation between Auden’s capacious thought and the work of Shakespeare, these lectures are also a prelude to many ideas developed in Auden’s later prose — a prose in which, one critic has remarked, “all the artists of the past are alive and talking among themselves.”


Reflecting the twentieth-century poet’s lifelong engagement with the crowning masterpieces of English literature, these lectures add immeasurably to both our understanding of Auden and our appreciation of Shakespeare.

Arthur Kirsch, Alice Griffin Professor Emeritus at the University of Virginia, is the author of many books, including The Passions of Shakespeare's Tragic Heroes and Shakespeare and the Experience of Love, and the editor of several others.

"Auden penetrates to the very core of Shakespeare's originality, expressing himself in a crystalline analytical prose."—Kirkus Reviews

"Auden's lectures can be read with profit not just as a commentary, but as an anthology of the best and most revelatory passages of Shakespeare."—Michael Potemra, National Review

"A remarkably full account of what the poet said about Shakespeare but also about many other matters . . . A remarkable achievement."—Frank Kermode, London Review of Books

"Auden was no ordinary lecturer, as this collection shows . . . Alive with his magpie-like intelligence, punctuated by humorous asides and digressive interludes, [the lectures] are as much a running commentary on the practices and preoccupations of a poet at the height of his own creative powers as they are an exposition of the works of another."—The Economist

"Auden's quick and reflective mind is everywhere apparent in these essays. . . . Through his insightful, often arresting comments on love, friendship, forgiveness, transformation, villainy, justice, responsibility, authority, and other life-defining concepts, Auden generates a template that teaches as much about experience as it does about Shakespeare's plays. . . . Readers will be grateful for access to the wisdom of an especially astute poet who clearly knew Shakespeare."—Choice

"Arthur Kirsch has artfully patched together a richly circumstantial and dramatic volume that brings the bizarre, playful, haunted Auden of these years vividly to life. . . . Auden's Lectures on Shakespeare, miraculously speaking to us from another world, are crammed with . . . illuminations, sparks of wit, suggestive pieces of poetic fancy."—Nicholas Jenkins, The New Republic

"Anyone who cares about Shakespeare will enjoy this book, the finest by any English poet on the subject since (and I am not forgetting Coleridge) Dr. Johnson."—Lachlan MacKinnon, Daily Telegraph

"In every way, Kirsch has produced a model of useful scholarship. . . . To know Auden's work well is to acquire a liberal education. These lectures on Shakespeare are a good place to start."—Michael Dirda, Washington Post Book World

"For anyone who has ever resolved in vain to sit down and read right through Shakespeare, this at last is the volume to help fulfil that resolution. But it is also a volume to place beside the family Shakespeare. In the best sense of the word it is masterly."—Christopher Murray, Irish Times

"What Auden has to say about Shakepeare's plays is almost always interesting, for two reasons. First, he knows how to praise or dissent, and to do so with much originality; secondly, he speaks of the ideas that were shaping his own thought and work at this important moment in his career, so that this book is as much a contribution to our understanding of Auden as it is to our appreciation of Shakespeare. It is beautifully edited and should interest all readers of Shakespeare and all admirers of Auden."—Frank Kermode

"Auden's lectures on Shakespeare are a marvelous blend of steady, patient intelligence and stunning insight—spirited, free-thinking, resourceful, unintimidated, liberated from the air of treacly piety, and very, very intelligent."—Stephen Greenblatt