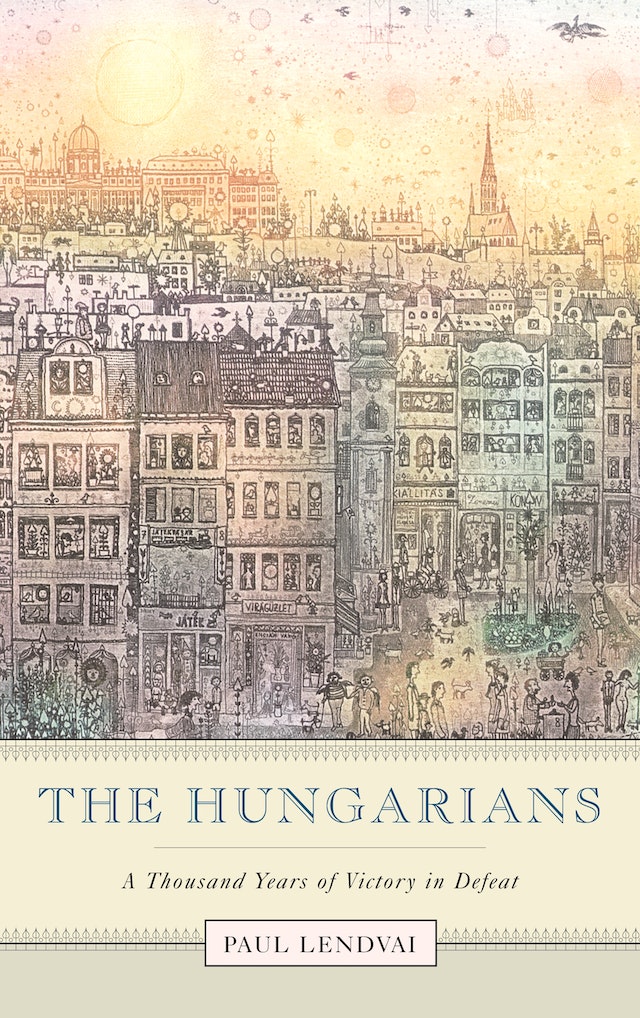 The Hungarians is the most comprehensive, clear-sighted, and absorbing history ever of a legendarily proud and passionate but lonely people. Much of Europe once knew them as “child-devouring cannibals” and “bloodthirsty Huns.” But it wasn’t long before the Hungarians became steadfast defenders of the Christian West and fought heroic freedom struggles against the Tatars (1241), the Turks (16-18th centuries), and, among others, the Russians (1848-49 and 1956). Paul Lendvai tells the fascinating story of how the Hungarians, despite a string of catastrophes and their linguistic and cultural isolation, have survived as a nation-state for more than 1,000 years.

Lendvai, who fled Hungary in 1957, traces Hungarian politics, culture, economics, and emotions from the Magyars’ dramatic entry into the Carpathian Basin in 896 to the brink of the post-Cold War era. Hungarians are ever pondering what being Hungarian means and where they came from. Yet, argues Lendvai, Hungarian national identity is not only about ancestry or language but also an emotional sense of belonging. Hungary’s famous poet-patriot, Sándor Petofi, was of Slovak descent, and Franz Liszt felt deeply Hungarian though he spoke only a few words of Hungarian. Through colorful anecdotes of heroes and traitors, victors and victims, geniuses and imposters, based in part on original archival research, Lendvai conveys the multifaceted interplay, on the grand stage of Hungarian history, of progressivism and economic modernization versus intolerance and narrow-minded nationalism.

He movingly describes the national trauma inflicted by the transfer of the historic Hungarian heartland of Transylvania to Romania under the terms of the Treaty of Trianon in 1920 — a trauma that the passing of years has by no means lessened. The horrors of Nazi and Soviet Communist domination were no less appalling, as Lendvai’s restrained account makes clear, but are now part of history.

An unforgettable blend of eminent readability, vibrant humor, and meticulous scholarship, The Hungarians is a book without taboos or prejudices that at the same time offers an authoritative key to understanding how and why this isolated corner of Europe produced such a galaxy of great scientists, artists, and entrepreneurs.

Paul Lendvai is a leading European journalist and a senior television commentator with ORF, the Austrian public broadcasting corporation. Since 1973 he has been editor in chief and copublisher of the Vienna-based international quarterly Europäische Rundschau. The recipient of numerous prizes for his writings and journalism, he is the author of ten books, including Blacklisted: A Journalist's Life in Central Europe (St. Martin's), Eagles in Cobwebs: Nationalism and Communism in the Balkans, and Anti-Semitism without the Jews: Communist Eastern Europe (both Doubleday).

"A pleasure to read. . . . Mr. Lendvai has done a remarkable job. His book is easily the best history of Hungary in English. . . . What's remarkable is how many extraordinary individuals, admirable and otherwise, we come across in this small nation's history."—Stephen Goode, Washington Times

"The writing of national histories is . . . justified by the erudition and intellectual brilliance of the [author]. To this one must add, as a special attraction, the charm, wit and healthy cynicism of The Hungarians."—Istvan Deak, Times Literary Supplement

"[R]ewarding, entertaining, and well written. . . . [F]ar more substantial than the witty musings to be found, for example, in Luigi Barzini's The Italians. . . . No one who is interested in Hungary should miss reading this book."—Nicolas Parsons, Hungarian Quarterly

"An outstanding storyteller. [Lendvai] not only presents scientifically based facts and analysis but also tells the reader a story. . .. A compact overview of Hungarian history, a wonderful collection of biographical sketches and a subtle description of the 'Hungarian temperament'."—Neue Zürcher Zeitung

"Excellently researched and masterfully constructed, this should become a standard work. . . . The book reads almost like a novel with historical background. . . . Most warmly recommended."—Die Presse

"An exhaustive history of the Hungarian people. . . . The author has written a sympathetic account of Hungarian history. Yet the book also exposes the blemishes along with the heroism. . . . For those interested in the history of a art of Europe that has been shrouded in mystery and cliché, it's a helpful handbook."—Anne Gyulai, The Montreal Gazette

"It is history's destiny to stare helplessly as the past's effects on facts have them act no differently on our minds and bodies than do fictions. In his loving rendering of Hungary's troubled saga, Lendvai has shown us how our knowledge and memory are a tangle of both threads."—Norman Madarasz, The European Legacy

"When Paul Lendvai, the indefatigable observer of Eastern Europe, writes a book, he has in general something exciting to relate. . . . Lendvai's book is a well-constructed mixture of historical facts, political judgments, and cultural anecdotes."—Der Spiegel

"Lendvai has written a standard-setting work, always at the highest level of historical research yet so eminently readable, so entertaining—only a journalist out of passion with profound knowledge of history is able to write in this way. . . . Lendvai's presentation of the thousand years of Hungarian history in Europe is not only comprehensive, it is also just."—Frankfurter Allgemeine Zeitung

"This brief narrative of Hungarian history, elegantly translated into English, is written with verve, humor, profound insights, and just the right degree of cynicism. It well explains the dilemma of a respectable old state squeezed between more powerful neighbors, the contradictions between individual genius and repeated national failure, and the recurring tragic conflicts between the defense of nationhood and messianic nationalism. It is supplemented with fascinating essays on, for instance, the complexities of Jewish and German assimilation into the Hungarian nation."—István Deák, Columbia University