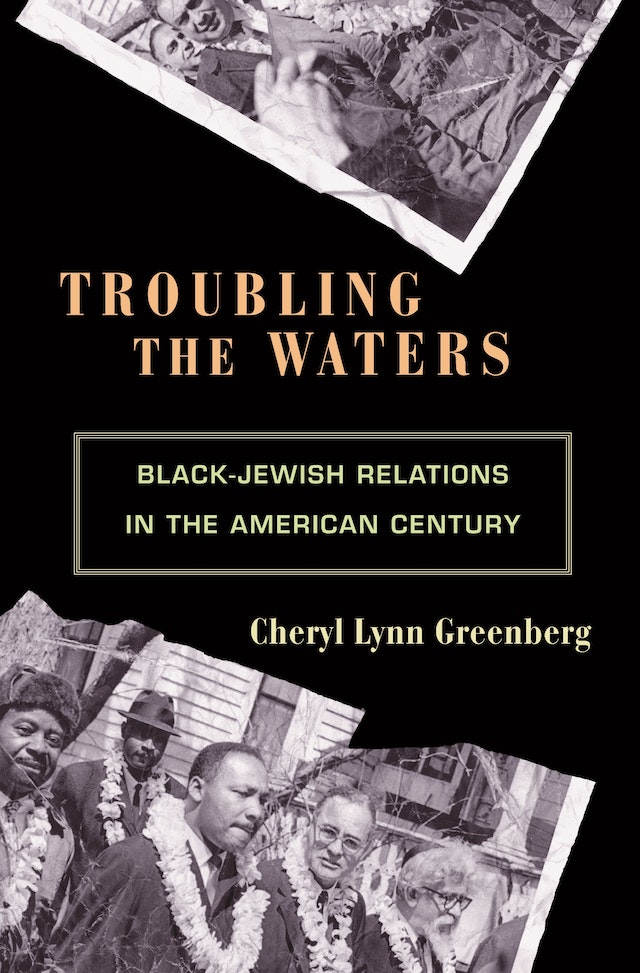 Was there ever really a black-Jewish alliance in twentieth-century America? And if there was, what happened to it? In Troubling the Waters, Cheryl Greenberg answers these questions more definitively than they have ever been answered before, drawing the richest portrait yet of what was less an alliance than a tumultuous political engagement — but one that energized the civil rights revolution, shaped the agenda of liberalism, and affected the course of American politics as a whole.


Drawing on extensive new research in the archives of organizations such as the NAACP and the Anti-Defamation League, Greenberg shows that a special black-Jewish political relationship did indeed exist, especially from the 1940s to the mid-1960s — its so-called “golden era” — and that this engagement galvanized and broadened the civil rights movement. But even during this heyday, she demonstrates, the black-Jewish relationship was anything but inevitable or untroubled. Rather, cooperation and conflict coexisted throughout, with tensions caused by economic clashes, ideological disagreements, Jewish racism, and black anti-Semitism, as well as differences in class and the intensity of discrimination faced by each group. These tensions make the rise of the relationship all the more surprising — and its decline easier to understand.


Tracing the growth, peak, and deterioration of black-Jewish engagement over the course of the twentieth century, Greenberg shows that the history of this relationship is very much the history of American liberalism — neither as golden in its best years nor as absolute in its collapse as commonly thought.

Cheryl Lynn Greenberg is the Paul E. Raether Distinguished Professor of History at Trinity College in Hartford, Connecticut. She is the author of "Or Does it Explode?" and To Ask for an Equal Chance, and the editor of A Circle of Trust: Remembering SNCC.

"[Greenberg's] smart and comprehensive analysis . . . is one of the best of a spate of new books on this topic, with her fine research and careful delineation of the facts."—Publishers Weekly

"The vexed topic of black-Jewish relations in 20th-century America requires a brave writer, and Greenberg confronts the issue with honesty and dedication. While she provides ample evidence that the golden age of cooperation between the two groups wasn't as harmonious as generally believed, she also provides numerous examples of cohesion during the more fraught times. Greenberg is not only adept at uncovering little-known controversies and victories; her brief exposition of the famous New York City teachers' strike in the late 1960s, an incident widely credited with bringing to a boil simmering black-Jewish tensions, is a masterpiece of compression and insight."—Atlantic Monthly

"Greenberg's most impressive achievement is the way she weaves the story of black-Jewish relations into the larger history of American liberalism in the twentieth century...While the likelihood of another 'golden age' of black-Jewish relations seems remote, what is certain is that Greenberg's book will be essential reading for anyone interested in this complex relationship and in the history of American liberalism more broadly."—Eric L. Goldstein, American Historical Review

"Troubling the Waters gives textured life to more than 100 years of civil rights efforts and offers a window into the complex, political decision-making of courageous and often admirable individuals."—Jane Gordon, Diverse

"[Cheryl Greenberg] provides extremely detailed histories of Jewish and African American civil rights efforts, together and as separate communities. . . . [F]or the scholar and political tactician, the volume is a goldmine of information. . . . [T]his book is likely to become one of the classic histories of black-Jewish relations in the United States."—Jewish Book World

"Greenberg's is one of the best of a spate of new books on this topic, with her fine research and careful delineation of the facts."—Press-Enterprise

"Essential reading for understanding ethnic/race relations and Jewish identity. . . . Greenberg offers the best study on black-Jewish relations and one that will stand as a classic in the field."—Ronald H. Bayor, Southern Jewish History

"Cheryl Greenberg's view is that Black and Jewish interests and priorities have been fundamentally different all along but did, during a particular period, overlap sufficiently. . . . Cheryl Greenberg has certainly helped to provide . . . a clearer understanding [of the Black-Jewish relationship] with this well-written, well-researched book, which is chock full of information and sensible analysis by a thoughtful, sensitive, and sympathetic writer."—Yankl Stillman, Jewish Currents

"Greenberg's history is both synthetic and original, especially in its coverage of the last thirty-five years. . . . Troubling the Waters is a painstakingly researched, impressively documented, well-written, and important contribution to the field."—Dominic J. Capeci Jr., Journal of American History

"[Greenberg's] book is lucid in its exposition, balanced in its tone, and generous in its sympathies. Writing from a resolutely liberal perspective, she has built upon and outclasses all previous scholarship on the history of the black-Jewish encounter in twentieth-century America."—Stephen J. Whitfield, Jewish History

"Cheryl Greenberg's book stands as an exemplar of scholarship not just in American Jewish history and in African American history, but also in the history of American liberalism which in many ways is the key force which dominates the narrative here."—Hasia R. Diner, Modernism/Modernity

"In Troubling the Waters: Black Jewish Relations in the American Century, Greenberg has done more than write a book that will be of interest to students of Jewish-American history or the African American experience. She has instead produced a work—ambitious in scope and thoughtful in tone—that will be of enormous value to those interested in the broader history of postwar America and the rise of modern liberalism."—Alan Petigny, Reviews in American History

"Troubling the Waters is the most complete attempt to unravel the complicated history of black-Jewish relations during the 20th century."—Edward S. Shapiro, Congress Monthly

"The best-researched and most comprehensive account yet of Black-Jewish relations in the twentieth century. The messy complexities of the relationship, the insensitivities displayed on all sides, are here revealed for all to see. Sobering, realistic, and definitive."—Jonathan D. Sarna, Brandeis University

"For readers who puzzle about what happened to the fabled alliance between Blacks and Jews, Troubling the Waters provides the authoritative answer. It is testament to Cheryl Lynn Greenberg's discipline as a historian, as well as her personal acumen and devotion to justice, that she is able to take up so fraught a subject and to give us such an illuminating account."—Stephen Steinberg, author of Turning Back: The Retreat from Racial Justice in American Thought and Policy

"A masterful assessment of the relationships between African Americans and Jews in the twentieth century. Greenberg's deeply researched and well-written analysis provides new materials, fresh insights, and a keen understanding of the plight of both groups. Her book is bias-free while sympathetically presenting the perspectives of African Americans and Jews. Vastly superior to everything else that has previously been written on the topic, Troubling the Waters will become the standard by which all other works on the subject are measured."—Leonard Dinnerstein, Professor Emeritus, University of Arizona

"Cheryl Lynn Greenberg's Troubling the Waters is engaging and well researched, and the author insightful and thorough. The book fills a void in the historiography and will make a much-needed addition to courses in African American Studies, American history, and sociology. It is an invitation to explore some of the most compelling issues in race politics today."—Barbara Ransby, University of Illinois at Chicago, author of Ella Baker and the Black Freedom Movement