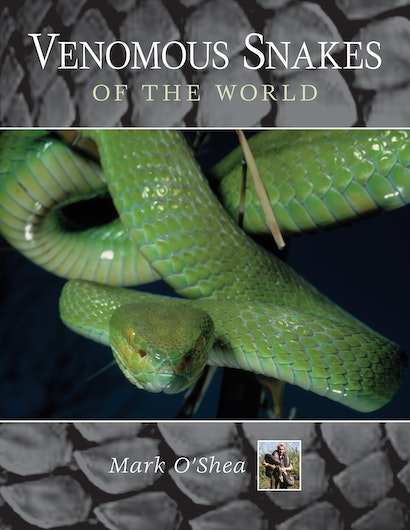 Feared, revered, and often misunderstood, venomous snakes have been a source of legend and nightmare since time immemorial. In this comprehensive volume, author Mark O’Shea has combined expertly written, in-depth descriptions of the world’s common and exotic venomous snakes, highlighted by previously unpublished gripping accounts of his adventures with snakes, including personal observations and several serious snakebite episodes.

The book begins with a description of the anatomies of venomous snakes, along with their diversity and distribution. Also included is a unique in-depth look at the various types of snake venom and the ways that each type attacks the body. A section on anti-venom, including thoughts on the looming anti-venom crisis, is also presented. Information on the adaptations of ocean-dwelling snakes and issues of snake conservation as well as an examination of venomous lizards follow.

From bamboo pitvipers to deep-diving seasnakes, and from adders and asps to terciopelos and the massasaugas, this book takes an original approach to examining these enthralling creatures. Rather than the typical taxonomic categorization, the snakes are grouped by geographic location: the Americas, Africa, Eurasia, Tropical Asia, Australasia, and the Oceans. Each section is illustrated with stunning and rare pictures, many of which were taken by the author himself.

Suitable for professional snake handlers and armchair herpetologists alike, this extremely accessible book is an enthusiastic celebration of the diversity and beauty of venomous snakes worldwide.

Mark O'Shea, curator of reptiles at West Midland Safari Park (U.K.), has participated in more than sixty fieldwork and filming exhibitions, traveling to every continent except Antarctica.

"This is a large book with more than 150 quality full-color photographs, some of which may frighten the serpent-phobic."—Alvin Hutchinson, Library Journal

"Poisonous snakes have been part of human legends - and nightmares - since the beginning of time. O'Shea, a reptile expert and television host, brings to life the world of serpents from around the world [with] hundreds of stunning, often rare, photographs."—The Globe & Mail

"[D]azzling, a photographic journey among the scaly and the lethal."—Anneli Rufus, East Bay Express

"If you want a world of information on venomous snakes then look no further than Venomous Snakes of the World. I promise you that you will find the text entertaining and the photos unforgettable."—The Flying Mullet