An "impressive" history of Afghanistan (New York Times Book Review), from the Mughal Empire to the Taliban 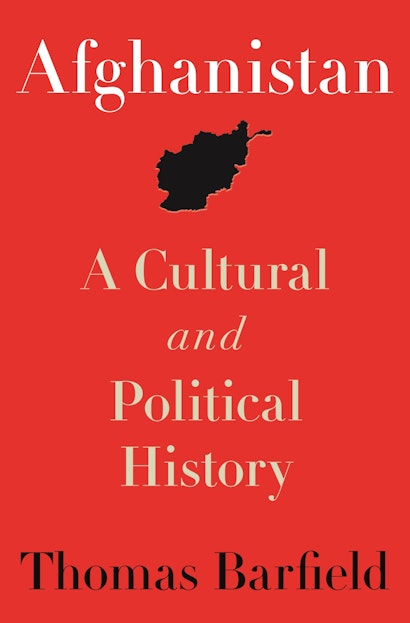 Afghanistan traces the historic struggles and the changing nature of political authority in this volatile region of the world, from the Mughal Empire in the sixteenth century to the Taliban resurgence today. Thomas Barfield introduces readers to the bewildering diversity of tribal and ethnic groups in Afghanistan, explaining what unites them as Afghans despite the regional, cultural, and political differences that divide them. He shows how governing these peoples was relatively easy when power was concentrated in a small dynastic elite, but how this delicate political order broke down in the nineteenth and twentieth centuries when Afghanistan’s rulers mobilized rural militias to expel first the British and later the Soviets. Armed insurgency proved remarkably successful against the foreign occupiers, but it also undermined the Afghan government’s authority and rendered the country ever more difficult to govern as time passed. Barfield vividly describes how Afghanistan’s armed factions plunged the country into a civil war, giving rise to clerical rule by the Taliban and Afghanistan’s isolation from the world. He examines why the American invasion in the wake of September 11 toppled the Taliban so quickly, and how this easy victory lulled the United States into falsely believing that a viable state could be built just as easily.

Afghanistan is essential reading for anyone who wants to understand how a land conquered and ruled by foreign dynasties for more than a thousand years became the “graveyard of empires” for the British and Soviets, and what the United States must do to avoid a similar fate.

"This book is an authoritative and well-written summary of what we might call the majority view. There is a streak in this book, however, of more radical thinking. . . . It leads him near the end of the book to some startling predictions for Afghanistan's possible futures."—Gerard Russell, Foreign Policy

"Thomas Barfield's new book offers a remedy for Americans' pervasive ignorance of Afghanistan. . . . Afghanistan: A Cultural and Political History is an invaluable book. Mr. Barfield does not give the United States a way out of Afghanistan, but he does provide the context necessary for good policymaking."—Doug Bandow, Washington Times

"A brilliant book to educate all of us about a country we should know and appreciate. . . . Thomas Barfield's book on Afghanistan is likely to become the first source that serious students turn to as a guide to this complicated country. His comprehensive portrait of Afghanistan is a stunning achievement."—Joseph Richard Preville, Saudi Gazette

"Barfield, an anthropologist and old Afghanistan hand, has written a history of Afghanistan that weaves in geography, economics, and culture (think tribes, rural-urban dichotomies, value systems) while maintaining a focus throughout on Afghan rulers' relations with their own people and the outside world. [The book] is lightened by many breaks in the narrative to address broad themes or make intriguing comparisons, such as likening patrimonial Afghanistan to medieval Europe."—Foreign Affairs

"In this riveting study, Barfield does a splendid job of informing us why Afghanistan is the way it has always been."—Daily Star

"Afghanistan: A Cultural and Political History by Thomas Barfield is a primer for anyone seeking to understand the region, its cultural and political underpinnings."—Raghu Mohan, BusinessWorld

"Barfield shows how Afghan notions of political legitimacy and social organization are eerily timeless. . . . This book may change the way you think about Afghanistan."—Brian Kappler, Montreal Gazette

"Impressive. . . . Barfield traces much of what Afghanistan is about to its geography and to developments from thousands of years ago, but he also asserts that the decade of Russian occupation changed Afghanistan permanently."—Harry Eagar, Maui News

"Despite a plethora of books about Afghanistan in the last few years, a good book on the country has not been published since Louis Dupress's 1973 Afghanistan. Maybe the long wait is over. Barfield's new book . . . comes close to matching Dupree's sweeping sense of Afghanistan's complicated history and culture. An anthropologist, as was Dupree, who personally visited most areas of Afghanistan, Barfield is able to put the bewildering complexity of tribes, ethnic groups, religious sects, warlords, and political feuds that is Afghanistan into a coherent whole that is both readable and informative."—Choice

"Thomas Barfield . . . has provided a rich discussion of the anthropological and historical context for developing such a formula, which is a critical missing piece in the Obama Administration's policy in Afghanistan. . . . Barfield has given us a valuable effort by a Westerner to decode a very foreign society—never an easy task. As a prism through which to understand the current conflict in Afghanistan, this book reminds us that war is about politics and that policies is about who rules and how rule is legitimated."—Marin Strmecki, American Interest

"[Barfield's] deep knowledge brings clarity to a frightfully complicated region that has been and will continue to be of extraordinary importance to policy debates. Scholarly experts in search of an exhaustive reference to the region and those seeking an introduction to the ins and outs of Afghan history will find this book of interest."—Malou Innocent, CATO Journal

"Anyone who wishes to comprehend the intricacies of this complex and mysterious country would be wise to consult this exceedingly valuable book."—Raphael Israeli, Israel Journal of Foreign Affairs

"Overall, Barfield is successful in his attempts to render the history of Afghanistan legible to the trained or casual reader. His clear and approachable writing style, use of narrative, metaphor and personal stories to illustrate his arguments, thoroughness and quickness of pace, and his clear personal joy, investment and fascination with the country make this a highly readable—and more—digestible, historical account. . . . It is, in the end, a fascinating read and a tremendous resource."—Rebecca Gang, Jura Gentium

"Afghanistan: A Cultural and Political History makes a serious attempt to survey and analyze the changing political, cultural, and social landscapes of the country from the ancient time to the present. It provides meaningful and objective insights into governance, state legitimacy, social and economic development, and foreign interventions, and Afghan responses to them, with an admirable degree of thoughtfulness and fluency."—Amin Saikal, Marine Corps University Journal

"Barfield has written a magnificent, learned, provoking book. He knows Afghanistan better than almost anyone writing on the topic today. He matches that knowledge with keen insight into how human societies grow and change. Barfield helps us think well about a complex and distant land, which is no small achievement."—Paul D. Miller, Books and Culture

"Barfield offers a critique of U.S. and Western strategy in Afghanistan that will likely generate controversy, but strategists, planners, and those on missions in Afghanistan ignore them at their peril. Highly recommended."—Prisco R. Hernandez, Military Review

"In his admirable volume on Afghanistan, Thomas Barfield has written a real tour de force. . . . No one should venture today into Afghanistan, in whatever capacity, without first reading this guide for the perplexed."—Raphael Israeli, European Legacy

"Afghanistan: A Cultural and Political History is essential reading for anyone who wants to understand either the history of Afghanistan or what is happening there now."—Danny Yee, Danny Reviews

"This fascinating survey of Afghanistan is an excellent book for those wanting to go beyond headlines. Written by an expert, with the stylistic flair to be savored by the nonexpert, Afghanistan also has judgments worthy of scholarly reflection. Barfield has captured political, social, and cultural insights of extraordinary importance to the policy arguments of today and tomorrow. Deploying diplomats, soldiers, and aid workers in particular should pay attention."—Ronald E. Neumann, U.S. ambassador to Afghanistan, 2005-2007

"Barfield's book will become the single best source on Afghan history and politics virtually overnight. His deep knowledge of Afghanistan enables him to range widely and knit together a very coherent narrative with a conceptual clarity that is pretty rare. A great deal of learning is evident here, but Barfield wears it lightly."—James C. Scott, author of Seeing Like a State

"Barfield's book is an excellent general introduction to the country and will be a source of wider debate within and beyond the scholarly community. I am not aware of a history of this kind that explores governance and state legitimacy as its organizing themes."—Magnus Marsden, author of Living Islam: Muslim Religious Experience in Pakistan's North-West Frontier