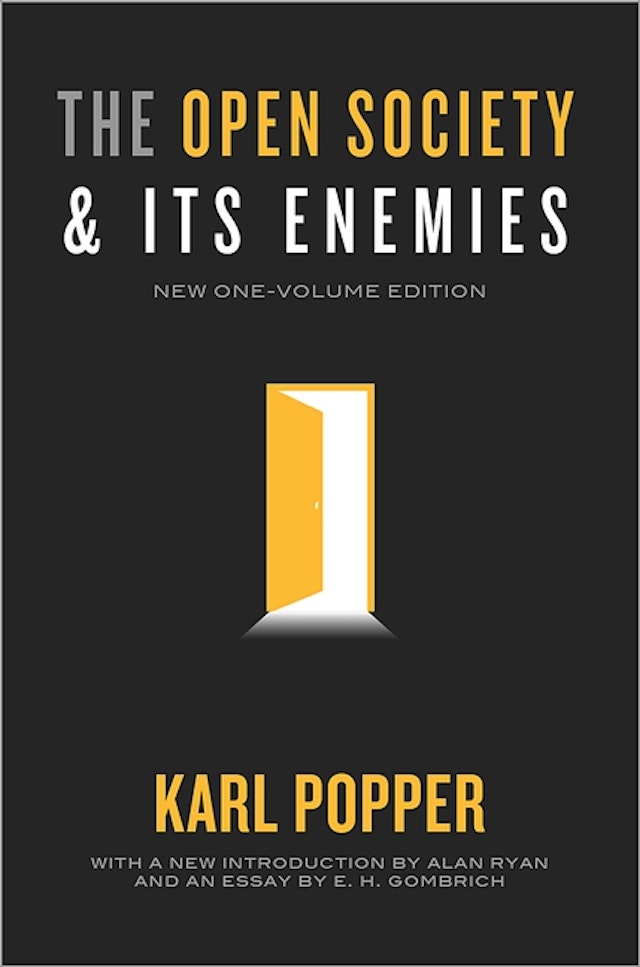 One of the most important books of the twentieth century, Karl Popper’s The Open Society and Its Enemies is an uncompromising defense of liberal democracy and a powerful attack on the intellectual origins of totalitarianism. Popper was born in 1902 to a Viennese family of Jewish origin. He taught in Austria until 1937, when he emigrated to New Zealand in anticipation of the Nazi annexation of Austria the following year, and he settled in England in 1949. Before the annexation, Popper had written mainly about the philosophy of science, but from 1938 until the end of the Second World War he focused his energies on political philosophy, seeking to diagnose the intellectual origins of German and Soviet totalitarianism. The Open Society and Its Enemies was the result.

An immediate sensation when it was first published in two volumes in 1945, Popper’s monumental achievement has attained legendary status on both the Left and Right and is credited with inspiring anticommunist dissidents during the Cold War. Arguing that the spirit of free, critical inquiry that governs scientific investigation should also apply to politics, Popper traces the roots of an opposite, authoritarian tendency to a tradition represented by Plato, Marx, and Hegel.

In a substantial new introduction written for this edition, acclaimed political philosopher Alan Ryan puts Popper’s landmark work in biographical, intellectual, and historical context. Also included is a personal essay by eminent art historian E. H. Gombrich, in which he recounts the story of the book’s eventual publication despite numerous rejections and wartime deprivations.

Karl Popper (1902-1994) was one of the most important philosophers of the twentieth century. His books include The Logic of Scientific Discovery, The Poverty of Historicism, Conjectures and Refutations, and an autobiography, Unended Quest. He was a professor at the London School of Economics.

"No thinking person would be doing himself a service by neglecting Popper's book."—Joseph Craft, The Nation

"One of the great books of the century."—Times

"Brilliant. . . . It remains the best intellectual defence of liberal democracy."—Economist

"Few philosophers . . . have combined such a vast width of knowledge with the capacity to produce important original ideas as [Popper] did."—Guardian

"A major work. Combining the clarity of thought of the trained scientist with lucidity of presentation, Mr. Popper has written an unusually thoughtful and provocative book."—Hans Kohn, Yale Review

"A work of first-class importance which ought to be widely read for its masterly criticism of the enemies of democracy, ancient and modern."—Bertrand Russell

"A powerful and important book. Dr. Popper writes with extreme clarity and vigour. His studies in Greek history and Greek thought have obviously been profound and original. Platonic exegesis will never be the same again. Nor, I think, will Marxist exegesis."—Gilbert Ryle