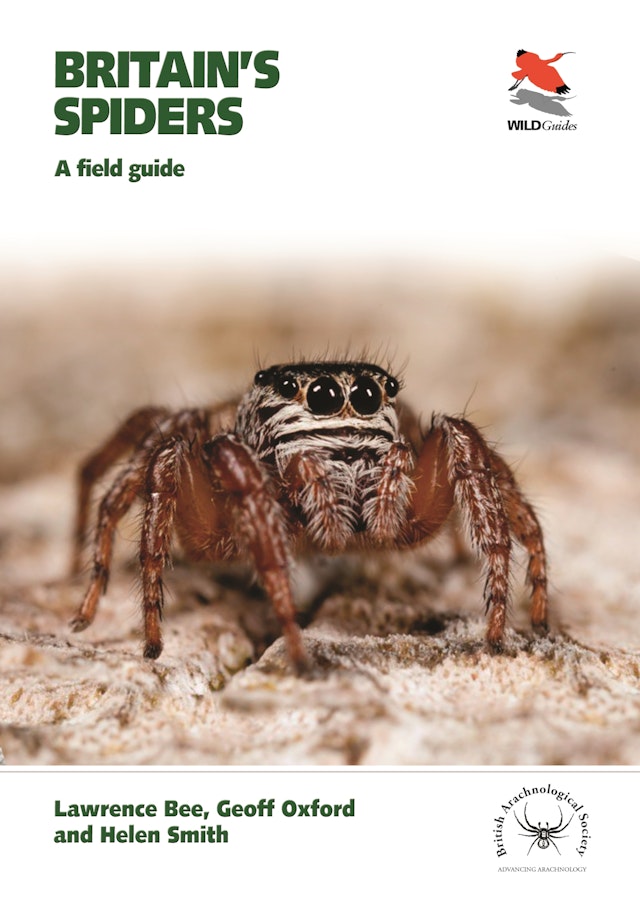 Britain’s Spiders is a photographic guide to all 37 of the British families, focussing on spiders that can be identified in the field. Illustrated with a remarkable collection of photographs, it is designed to be accessible to a wide audience, including those new to spider identification. This book pushes the boundaries of field identification for this challenging group by combining information on features that can be seen with the naked eye or a hand lens with additional evidence from webs, egg-sacs, behaviour, phenology, habitats and distributions. Individual accounts cover 395 of Britain’s approximately 670 species, with the limitations to field identification clearly explained.

As the first photographic field guide to British spiders to be published since 1989, this book fills a major gap in the resources available to everyone with an interest in this fascinating, diverse and important group of animals.

Lawrence Bee is an ecological consultant and educator and the author of the Field Studies Council's Guide to House and Garden Spiders. Geoff Oxford is a biologist at the University of York and an authority on both colour variation and speciation in spiders. Helen Smith is a conservation biologist and currently leads the conservation programme for the endangered Fen Raft Spider.This book is produced in collaboration with the British Arachnological Society (www.britishspiders.org.uk), of which all three authors are active members.

"One reason arachnids are so misunderstood is a general lack of decent field guides to teach us anything about them, a gap this book fills with aplomb. . . . A must for anyone interested in nature."—Ross Piper, BBC Wildlife

"Britain's Spiders is excellent value. . . . The book is well written. The Species Accounts are clear and concise, helped by the superb color photographs which accompany them. All in all, a very useful and informative guide, and a significant addition to books on Britain's spiders."—Don Jenner, British Journal of Entomology and Natural History

"The stand-out feature of these guides is the generous layout and spacing of the species accounts afforded by the format. . . . It engages, inspires, and enables spiders to be named . . . I strongly suspect that many arachnologists of the future will have been inspired by their encounter with this field guide."—Paul Tinsley-Marshall, British Wildlife

"We've waited with such great anticipation that it would have been easy for the final product to fall short of our expectations, but I can happily report that it does the opposite! . . . The central piece of the book is, of course, the species accounts section. The accounts are first class and the attention to detail superb. . . . I commend this book to all those interested in identifying and recording British spiders."—Richard Burkmar, British Arachnological Society Newsletter

"[A] fabulous new field guide Britain's Spiders by Lawrence Bee, Geoff Oxford and the marvellous spiderwoman herself Helen Smith, without whom the beasts would be much less loved."—Mark Cocker, Blackwater Blog

"This is a guide that will revolutionise the study of British spiders, allowing confident field identification of many species and encouraging a new cohort of natural historians to take a closer look at these extraordinary creatures. The authors are to be congratulated on a the completion of a herculean task that has made spiders accessible to a wider audience."—Peter Smithers, Antenna: Journal of the Royal Entomological Society

"This is a book that looks good and feels good. It's not too big to put in your rucksack but big enough to give an enormous amount of information about British spiders. . . . A superb field guide, and an exemplar for how field guides should be laid out . . . if you ever visit Britain and/or want to get to know their spiders, this is the book to use."—Astri Leroy, South Africa Spider Club Newsletter

"The surprise hit of this year’s Birdfair . . . ideal for the arachnophile in your life."—Stephen Moss, The Guardian

"This is, without doubt, a fantastic publication. . . . The authors, photographers and publisher are to be congratulated on producing a high quality guide to the UK’s spider fauna which will be as useful to the experienced arachnologist as it is for the beginner."—Richard Wilson, Naturalist

"An outstanding contribution to the study of arachnids."—Entomologist's Record and Journal of Variation

"I can’t think of a field guide to any group of organisms that is more densely packed with information than this guide to Britain’s spiders. Chunky, glossy and colourful, this is an exciting proposition, and only the second photographic guide to our spiders. . . . A fine guide and good value for money, and as an introduction to our macro-spiders it sets a new high standard."—Matt Shardlow, Atropos