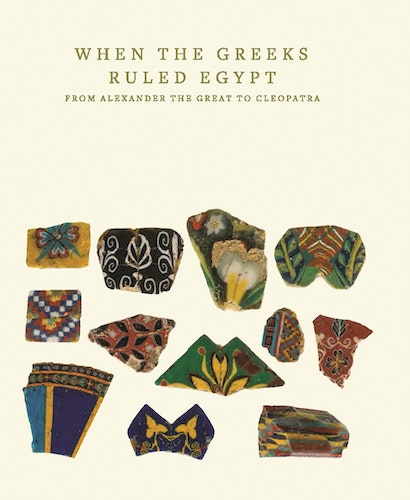 When the Greeks Ruled Egypt is the illustrated catalogue for the exciting exhibition at New York University’s Institute for the Study of the Ancient World. Through sculpture, coins, religious statuettes, funerary stelae, papyri, and more, all drawn from a variety of distinguished American collections, the catalogue examines the interactions between Greek and Egyptian cultures during the nearly three hundred-year period when Egypt was under Greek rule. It reveals how Egypt’s Ptolemaic rulers used cultural tropes as a means of asserting power and provoking loyalty among the conquered population. It also looks at the intense familial intrigue and jockeying for position that characterized the Ptolemies.

The catalogue’s essays address such issues as the use of royal portraiture to convey messages about the royal family and its power, the use of religion to assert the divine nature of the Ptolemies, popular iconographic forms, and the many languages spoken in Egypt before and during Ptolemaic rule. Exploring the ways in which two long-lasting and different traditions were brought together, When the Greeks Ruled Egypt reminds us that the use of culture — and family — for political ends is hardly unique to our era.

Roberta Casagrande-Kim is postdoctoral curatorial associate at the Institute for the Study of the Ancient World at New York University.

"Much of the information is more detailed than in many mainstream Ptolemaic books and for this reason I believe this book is a valuable addition to the book shelf of anyone interested in the period."—Charlotte Booth, Charlotte's Egypt.com

"The exposition throughout is masterful, and the text and photographs mutually illuminating, all to the benefit of specialists and the broader public."—Thomas M. Banchich, European Legacy