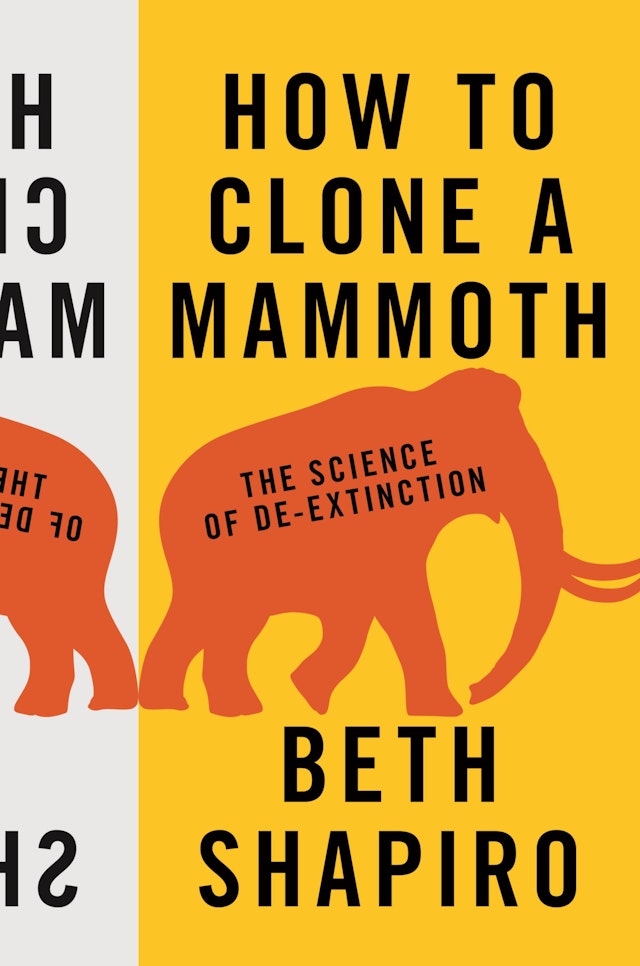 Could extinct species, like mammoths and passenger pigeons, be brought back to life? The science says yes. In How to Clone a Mammoth, Beth Shapiro, evolutionary biologist and pioneer in “ancient DNA” research, walks readers through the astonishing and controversial process of de-extinction. From deciding which species should be restored, to sequencing their genomes, to anticipating how revived populations might be overseen in the wild, Shapiro vividly explores the extraordinary cutting-edge science that is being used—today—to resurrect the past. Journeying to far-flung Siberian locales in search of ice age bones and delving into her own research—as well as those of fellow experts such as Svante Paabo, George Church, and Craig Venter—Shapiro considers de-extinction’s practical benefits and ethical challenges. Would de-extinction change the way we live? Is this really cloning? What are the costs and risks? And what is the ultimate goal?

Using DNA collected from remains as a genetic blueprint, scientists aim to engineer extinct traits — traits that evolved by natural selection over thousands of years—into living organisms. But rather than viewing de-extinction as a way to restore one particular species, Shapiro argues that the overarching goal should be the revitalization and stabilization of contemporary ecosystems. For example, elephants with genes modified to express mammoth traits could expand into the Arctic, re-establishing lost productivity to the tundra ecosystem.

Looking at the very real and compelling science behind an idea once seen as science fiction, How to Clone a Mammoth demonstrates how de-extinction will redefine conservation’s future.

Beth Shapiro is associate professor of ecology and evolutionary biology at the University of California, Santa Cruz. Her work has appeared in numerous publications, and she received a MacArthur Award in 2009. 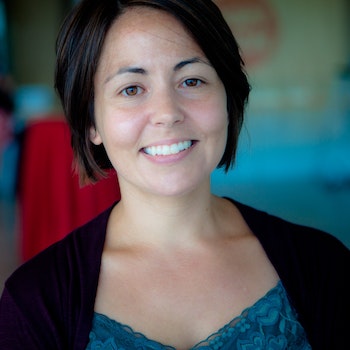 "Beth Shapiro . . . has produced a fascinating book. . . . For anyone who wants a thorough understanding of the technical issues involved in de-extinction, How to Clone a Mammoth should satisfy your curiosity."—Carl Zimmer, Wall Street Journal

"Shapiro . . . Lays out a well-articulated argument for the ‘resurrection of ecological interactions' as the most appropriate goal of de-extinction research. . . . Her professorial voice shines in her thoughtful roadmap for practical decision making in theory-heavy science, as well as in her efforts to 'separate the science of de-extinction from the science fiction of de-extinction.' Readers will emerge with the ability to think more deeply about the facts of de-extinction and cloning at a time when hyperbolic and emotionally manipulative claims about such scientific breakthroughs are all too common."—Publishers Weekly

"[A] clear appraisal of what it would really take to resurrect extinct species. . . . Several hurdles remain, and Shapiro presents these clearly and entertainingly as a brilliant thought experiment at the boundaries of biological plausibility."—Henry Nicholls, Nature

"As Shapiro sees it, de-extinction isn't about geeky genetic sleight of hand or about the resurrection of legendary beasts; it's a valuable new tool for conserving and enriching the global ecosystem."—Natural History

"In this lucid road map for the nascent discipline of ‘de-extinction,' Shapiro, an evolutionary biologist, examines not only how we can resurrect long-vanished species but also when we cannot or should not."—Scientific American

"As a researcher who is shaping this field, Shapiro is the perfect guide to the ongoing discussion about de-extinction. While many news items and conference presentations have focused on the technology required to create extinct life, Shapiro carefully considers every step along the journey to de-extinction, from choosing a species to revive to making sure they don't become extinct all over again….Whether you're all for de-extinction or against it, Shapiro's sharp, witty, and impeccably-argued book is essential for informing those who will decide what life will become."—Riley Black, National Geographic.com's Laelaps blog

"[Shapiro] goes to great lengths to demystify the art and science of cloning."—Kirkus Reviews

"Some of the best conversations I've had in recent months have come about while discussing de-extinction. The concept is simple: should we clone extinct animals, Jurassic Park-style, from found genetic material? How do we do it? What would the impact be on the environment? Shapiro makes it clear that we should have this discussion now because the future of de-extinction is real and coming fast."—Andrew Sturgeon, Flavorwire

"[A] fascinating book. . . . A great popular science title, and one that makes it clear that a future you may have imagined is already underway."—Library Journal

"In How to Clone a Mammoth, Shapiro provides detailed descriptions of current state-of-the-art bioengineering technologies, explaining just what can and cannot be done. She also provides a thorough discussion of the ethical and environmental issues raised by de-extinction proposals. Readers of the book will be well equipped to develop their own informed opinions on this controversial topic."—Ravi Mandalia, Techie News

"In How to Clone a Mammoth, molecular paleontologist Beth Shapiro spells out, step by step, how and how soon real scientists might be able to bring an extinct species back to life."—Nancy Szokan, Washington Post

"[T]houghtful and well-written. . . . Shapiro does an excellent job of showing that the realities of genuine science can be as exciting as the fantasies of science fiction."—Nick Rennison, Daily Mail

"[How to Clone a Mammoth] is at once an account of the state of the technology, a sketch of how to proceed, a barrage of as-yet unanswerable questions and a manifesto. . . . The science is fascinating."—Olivia Judson, Financial Times

"This charming volume is a how-to book with a vengeance."—Brian Bethune, Maclean's

"Shapiro… who actually works on the de-extinction of the passenger pigeon and the mammoth, aims to separate science from science fiction. She succeeds brilliantly. This book is likely to prove the definitive guide for non-specialists to the science of de-extinction for some time to come… Shapiro explores the vital questions surrounding the whole subject of de-extinction with great clarity… Shapiro is an acute, lively, sceptical and nuanced writer"—Caspar Henderson, Spectator

"Shapiro's thought-provoking book offers excitement and wonder – but also comes with a warning. We must think carefully, not just about how we can achieve this incredible scientific feat, but also about where it is likely to have the most positive (or least negative) impact, and why it is worth the investment and associated risks. [ . . . ] While Shapiro's message throughout How to Clone a Mammoth is unarguably one of caution, she finishes on a hopeful (and awesome) thought: using cutting-edge technology, we might be able to resurrect life that we once thought lost to us for ever, and soon. She paints a scientifically accurate yet magical world where Pleistocene giants might roam the Arctic tundra once again, and where we have the chance to undo some past mistakes – as long as we remember to keep looking towards the future.""—Tiffany Taylor, Times Higher Education

"Shapiro's book is a thoughtful how-to guide for the painstaking process of reviving not just mammoths but passenger pigeons and other lost species. Her aim is to separate science from science fiction by taking a critical look at proposals for bringing these animals back."—Allison, Bohac, Science News

"From her front-row seat as one of the pioneers of ancient-DNA research, Shapiro explains the fieldwork, lab science, and prospective ecology involved with the so-far hypothetical endeavor."—Bob Grant, The Scientist

"How To Clone A Mammoth is about as close as you get to sitting down with a nice cup of tea to have a decent chinwag with a mate about resurrecting the woolly mammoth. . . . Refreshingly, she replaces hyperbole with humour to guide the reader through the basics of de-extinction science… that personal touch brings warmth."—Dr Tori Herridge, BBC Focus Magazine

"Skilfully combining accounts of the scientific problems with ethical and practical considerations, the book is an informative and at times highly entertaining account of the life of a modern mammoth hunter. . . . Shapiro lucidly explains all the scientific problems that Jurassic Park conveniently glossed over . . . her real-life tales of mammoth hunting in the Siberian tundra . . . these sections are not so much Jurassic Park as a female geneticist version of Indiana Jones."—William Hartston, Daily Express

"In her new book, Shapiro offers an accessible, rigorous, I-can't-believe-it's-not-sci-fi guide to the world of de-extinction research. You can read the book as a pop primer on genetics, a field guide to future fauna, or as a roadmap to the next generation of conservation science. But reading about these mammoths and Tasmanian tigers, you start to feel that Shapiro is getting at bigger questions. . . . [She] is a lucid, relaxed, and often hilarious guide to the strange world of people who try to resurrect dead species."—Michael Schulson, Religion Dispatches

"[Beth Shapiro's] book exposes the fallacies in our thinking about such activities, as well as the real possibilities and even potential values of restoring some extinct species. This is not a silly book; rather, it is a serious story well told and a fun read."—Buffalo News

"[Shapiro] has skillfully blended cutting edge science with an overview of the ramifications that resurrecting lost fauna might have for the restoration of declining ecosystems."—Everything Dinosaur Blog

"[W]arm and accessible . . . Shapiro's informal approach, peppered with deadpan asides, is a welcome change from the hyperbole and grandstanding that have come to characterise popular debates on rewilding and de-extinction. . . . The open-hearted simplicity of How to Clone a Mammoth provides a great entry point for people who want to join in [the conversation]."—Tori Herridge, Literary Review

"I found this book to be an entertaining and deeply informative read that captures the complexity of both the science and the broader issues raised very well. The next time a film about rampaging Jurassic reptiles is on offer, you could instead settle in with this book and the beverage of your choice and learn about the true potential for species resurrection. Popcorn optional."—A. Rus Hoelzel, Science

"This book is an excellent introduction to the emergent science of de-extinction. Shapiro is a gifted writer who makes a complex subject accessible to readers with little science acumen. . . . The beauty of this work is in its honesty: Shapiro, who is invested in this science as a practitioner, does not attempt to woo the masses. She takes the ethical concerns head on, not as an advocate but as an honest broker."—Choice

"Beth Shapiro is an evolutionary biologist who specialises in ancient DNA. . . . Who better to take us through the technological developments and evidentiary likelihood of recreating extinct species? [A] well-written factual summary . . . playfully set out."—David Callahan, Birdwatch

"This book is careful, accessible, and thoughtful. The author is cautiously enthusiastic about de-extinction research, but she is also very realistic about the challenges and gives serious attention to some of the objections. The volume conveys a sense of excitement about the science, but without the uncritical techno-optimism that one sees in many popular articles."—Derek D. Turner, Quarterly Review of Biology

"Bringing a lost species back to life is an exciting prospect and also a scary one. No one is better able to explain the challenges and the potential of the enterprise than Beth Shapiro. How to Clone a Mammoth is an engaging, rigorous, and deeply thoughtful book."—Elizabeth Kolbert, author of The Sixth Extinction: An Unnatural History

"How to Clone a Mammoth is essential reading. Describing the cutting-edge science, and tackling the misleading ideas, surrounding de-extinction, this book immerses us in current discussions as well as the debates that are sure to come."—Joel L. Cracraft, American Museum of Natural History

"How to Clone a Mammoth takes a careful and entertaining look at the possibilities and consequences of bringing such animals as the mammoth and passenger pigeon back from extinction. Well-written and informative, the book explores the science and people involved in these investigations and the difficulties and false leads that have been encountered."—Peter H. Raven, president emeritus, Missouri Botanical Garden

"From basic science to ethics, How to Clone a Mammoth is a thorough and captivating exploration of an area at the leading edge of conservation biology. This book educates readers and entices all of us to delve more deeply into the issues discussed."—Simon Levin, author of Fragile Dominion