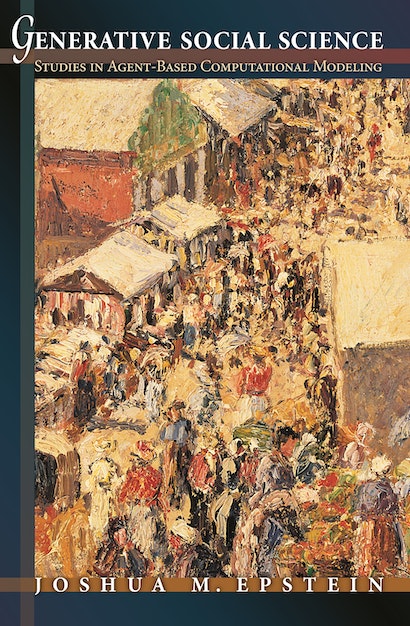 Agent-based computational modeling is changing the face of social science. In Generative Social Science, Joshua Epstein argues that this powerful, novel technique permits the social sciences to meet a fundamentally new standard of explanation, in which one “grows” the phenomenon of interest in an artificial society of interacting agents: heterogeneous, boundedly rational actors, represented as mathematical or software objects. After elaborating this notion of generative explanation in a pair of overarching foundational chapters, Epstein illustrates it with examples chosen from such far-flung fields as archaeology, civil conflict, the evolution of norms, epidemiology, retirement economics, spatial games, and organizational adaptation. In elegant chapter preludes, he explains how these widely diverse modeling studies support his sweeping case for generative explanation.

This book represents a powerful consolidation of Epstein’s interdisciplinary research activities in the decade since the publication of his and Robert Axtell’s landmark volume, Growing Artificial Societies. Beautifully illustrated, Generative Social Science includes a CD that contains animated movies of core model runs, and programs allowing users to easily change assumptions and explore models, making it an invaluable text for courses in modeling at all levels.

Joshua M. Epstein is a Senior Fellow in Economic Studies at the Brookings Institution, a founding member of the Brookings-Johns Hopkins Center on Social and Economic Dynamics, and a member of the External Faculty of the Santa Fe Institute. He is the coauthor of Growing Artificial Societies: Social Science from the Bottom Up and the author of Nonlinear Dynamics, Mathematical Biology, and Social Science.

"Joshua Epstein has been a leader in articulating and pursuing the agent-based generative approach to social science. This collection of his papers exemplifies both the depth of his methodological positions and the fruitfulness of agent-based analysis. The power of simple rules of local social interaction in generating explanations of complex social behavior is beautifully illustrated, most notably in the study of population fluctuations in Anasazi societies. I am convinced that agent-based approaches to economics will become a major tool."—Kenneth J. Arrow, Stanford University

"Generative Social Science is an outstanding example of an exciting paradigm shift in the analysis of dynamic social systems. Joshua Epstein is a virtuoso at using simple models to reveal surprising insights about the dynamics of a wide range of phenomena such as epidemics, status hierarchies, civil violence, and even the timing of retirement."—Robert Axelrod, University of Michigan

"Agent-based computational modeling represents an important new interdisciplinary approach to doing social science. Joshua Epstein, a pioneer of this approach, provides in Generative Social Science both a spirited defense of agent-based modeling and a dazzling display of the method's power."—John Duffy, University of Pittsburgh

"Epstein is a central and outstandingly creative figure in the emerging social science literature developed through agent-based simulation studies. Epstein offers an undogmatic, balanced account of his project and methods and shows in what specific ways they can open up whole broad questions that are simply unapproachable with traditional methods. The chapters address a stunningly wide range of problems, and each chapter has a distinctive and stimulating contribution to make."—Duncan K. Foley, New School for Social Research

"Generative Social Science is an important book that should be read by all who have a serious interest in the social sciences."—Peter Hedström, University of Oxford

"The contents are important, and until now have appeared in scattered and sometimes obscure places. The new commentary that the author has added ties these together in a coherent whole illustrating this new approach to the social sciences."—Brian Skyrms, University of California, Irvine

"This book is leading what is likely to be an increasingly important line of thought. The central argument and its illustrative applications present conceptual and methodological innovations that clearly have enormous potential. The writing is concise, accurate, balanced, and entertaining. Readers will be broadened, challenged, provoked, and inspired."—John Steinbruner, University of Maryland