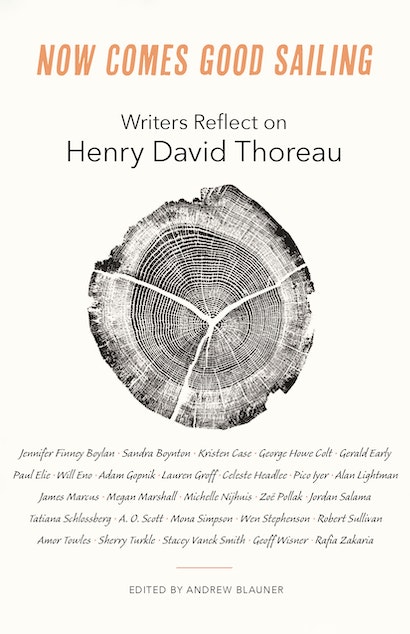 The world is never done catching up with Henry David Thoreau (1817-1862), the author of Walden, “Civil Disobedience,” and other classics. A prophet of environmentalism and vegetarianism, an abolitionist, and a critic of materialism and technology, Thoreau even seems to have anticipated a world of social distancing in his famous experiment at Walden Pond. In Now Comes Good Sailing, twenty-seven of today’s leading writers offer wide-ranging original pieces exploring how Thoreau has influenced and inspired them—and why he matters more than ever in an age of climate, racial, and technological reckoning.

Here, Lauren Groff retreats from the COVID-19 pandemic to a rural house and writing hut, where, unable to write, she rereads Walden; Pico Iyer describes how Thoreau provided him with an unlikely guidebook to Japan; Gerald Early examines Walden and the Black quest for nature; Rafia Zakaria reflects on solitude, from Thoreau’s Concord to her native Pakistan; Mona Simpson follows in Thoreau’s footsteps at Maine’s Mount Katahdin; Jennifer Finney Boylan reads Thoreau in relation to her experience of coming out as a trans woman; Adam Gopnik traces Thoreau’s influence on the New Yorker editor E. B. White and his book Charlotte’s Web; and there’s much more.

The result is a lively and compelling collection that richly demonstrates the countless ways Thoreau continues to move, challenge, and provoke readers today.

Celeste Headlee is an award-winning journalist, professional speaker and best-selling author of We Need To Talk: How To Have Conversations That Matter. She is co-host of the new weekly series Retro Report on PBS and season three of the Scene on Radio podcast – MEN. Celeste serves as an advisory board member for Procon.org and The Listen First Project. Her most recent book, Do Nothing: How To Break Away From Overworking, Overdoing, and Underliving, helps us break free of our unhealthy devotion to efficiency, and shows us how to reclaim our time and humanity with a little more leisure.

Pico Iyer has published 15 books, translated into 23 languages, on subjects ranging from the Dalai Lama to globalism, from the Cuban Revolution to Islamic mysticism. They include such long-running sellers as Video Night in Kathmandu, The Lady and the Monk, The Global Soul, The Open Road and The Art of Stillness. He has also written the introductions to more than 70 other books, and writes up to 100 articles a year for Time, The New York Times, The New York Review of Books, the Financial Times and more than 250 other periodicals worldwide.

A.O. Scott is a renowned critic of literature and film, and is currently a chief film critic for The New York Times. Mr. Scott has continued to dabble in literary criticism for The Book Review, and writes for The Times Magazine whenever he can. He also makes frequent appearances on radio and television, especially during Oscar season. He is also a distinguished professor of film criticism at Wesleyan University, and lectures widely on film and the importance of criticism, which is the subject of his book Better Living Through Criticism.

Rafia Zakaria is an author, attorney, and human rights activist who has worked on behalf of victims of domestic violence around the world. Her recent titles include Veil, The Upstairs Wife, and Against White Feminism. Zakaria has written for the Guardian, Boston Review, The New Republic, The New York Times Book Review, and is also a columnist for Dawn in Pakistan.