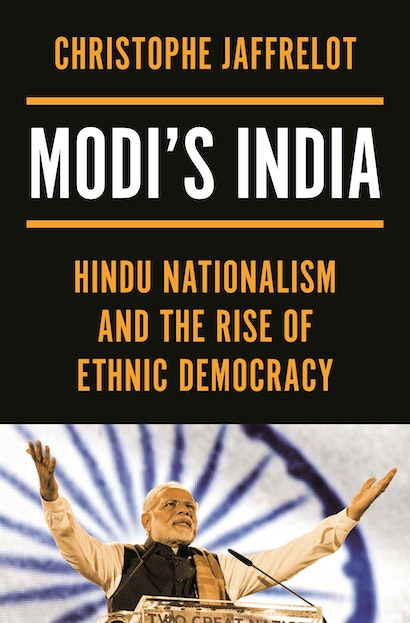 Please note: In-person attendees must wear face masks at all times while in GW buildings.
If you are not a GW student, member of faculty, or staff, additional protocols apply for in-person attendance (see go.gwu.edu/visitor), and we we strongly encourage you to join via Zoom.

Speaker: Christophe Jaffrelot works at the Centre for Studies in International Relations (CERI)-Sciences Po and served as its Director from 2000 to 2008. He is currently a senior research fellow at CNRS and a professor at Sciences Po. He is also a visiting professor at the India Institute, King’s College London, and has taught at Columbia University, Yale University, Johns Hopkins University, the Université de Montréal, and as a Global Scholar at Princeton University. Since 2008, he has been a non-resident fellow at the Carnegie Endowment for International Peace. His last book, co-authored with Pratinav Anil, is India’s First Disctatorship. The Emergency, 1975-77, London, Hurst, 2020 and his forthcoming book is Modi’s India. Hindu Nationalism and the Rise of Ethnic Democracy, Princeton University Press, 2021.

Introductory remarks: Alyssa Ayres was appointed dean of the Elliott School of International Affairs and professor of history and international affairs at George Washington University effective February 1, 2021. Ayres is a foreign policy practitioner and award-winning author with senior experience in the government, nonprofit, and private sectors. From 2013 to 2021, she was senior fellow for India, Pakistan, and South Asia at the Council on Foreign Relations (CFR), where she remains an adjunct senior fellow.

Discussant: Deepa Ollapally is a political scientist specializing in Indian foreign policy, India-China relations, and Asian regional and maritime security. She is Research Professor of International Affairs and the Associate Director of the Sigur Center. She also directs the Rising Powers Initiative, a major research program that tracks and analyzes foreign policy debates in aspiring powers of Asia and Eurasia.

Moderator: Marlene Laruelle, Ph.D., is Director of the Institute for European, Russian, and Eurasian Studies; Director of the Central Asia Program; Director of the Illiberalism Studies Program; Co-Director of PONARS Eurasia; and Research Professor of International Affairs at The George Washington University. She works on political, social, and cultural changes in the post-Soviet space. Marlene’s research explores the transformations of nationalist and conservative ideologies in Russia, nationhood construction in Central Asia, as well as the development of Russia’s Arctic regions.